Until this week, the idea of making big cuts to modest Social Security benefits seemed to have taken a long walk off a short cliff. While President Obama and Wall Street acolytes on Capitol Hill continue to call the huge benefit cut the most beautiful girl in the room, everyone else seems to have recognized its many faults. The benefit cut, a formula adjustment called chained CPI, has been called "a small technical change" by its proponents. However, it's no small change. Momentum for the proposal last week shifted dramatically in Washington with a group of conservatives, veterans, progressives, and new polling saying that the chained CPI proposal would harm Americans and not do anything significant to solve our fiscal problems.

But this week, speaking about the federal deficit, the President ignored expert and public opinion when he cited Bowles-Simpson and said, "The deals that I put forward, the balanced approach of spending cuts and entitlement reform and tax reform that I put forward are still on the table."

He didn't say he's willing to cut Social Security benefits, but he didn't have to. On the last Meet the Press of 2012, President Obama said that he was willing to go against AARP by making the tough decision of cutting benefits for older Americans and veterans. But he wasn't standing up to AARP. He was standing up to Americans of all ages who overwhelmingly don't want to see Social Security benefits cut. He said he was willing to break a campaign promise made last year by almost all Democrats and Republicans running for federal office: that they wouldn't cut benefits for current retirees or those nearing retirement.

Approaching President's Day, Valentine's Day, and the State of the Union address, Washington politicians in the new Congress can move forward with the confidence that pretty much no one likes chained CPI. When we read books and watch movies about the lives of successful American presidents, we don't witness an important moment about a President fixing the federal deficit. So why should this president, who's in his final term, seek to harm such historically important programs? Pictures of Presidents Franklin Roosevelt and Lyndon Johnson signing the bills that make Social Security and Medicare law have been prominently displayed. But there isn't a famous painting, photograph, or love letter to a President shown signing a bill to cut our benefits. The creation of both Social Security and Medicare have been historic, watershed moments. Cutting the benefits of people who depend on the lifeline programs would also be historic, but it would be an image that lived on in infamy. 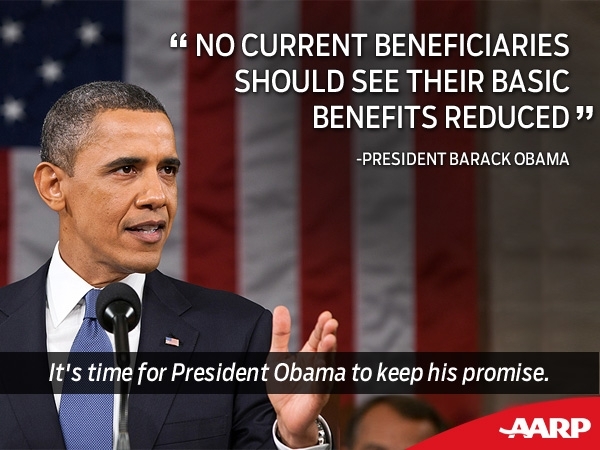 Last week three groups held events to say that the idea to cut Social Security and veterans benefits through the inflation formula adjustment called chained CPI has "bonkers" written all over it:

Conservatives:
Last week at a discussion sponsored by the conservative American Enterprise Institute, Andrew Biggs, a scholar who worked in George W. Bush's administration on Social Security policy, sat down on a panel with AARP's Legislative Policy Director David Certner and the two agreed that the chained CPI cuts the benefits of older Americans for no good reason. Biggs also worries it would raise taxes on some Americans. Toward the end of the conversation in response to a questioner Biggs said, "You want to have them [Congress] do something. You don't want to have them do something really crappy though...On Social Security side it's not good policy. On the tax side, it's not good. At some point you say it's not good policy."

After mentioning the sacrifices of generations of American veterans, Tarantino said,

If you support chained CPI, you support breaking your promise this country made to every single one of those veterans. And we cannot stand it. I will come back a 3rd and 4th time and keep reiterating it but I pray to God we don't have to. I pray to God that some sort of sanity descends on Washington and that we stop trying to solve our problems on the backs of those who have sacrificed the most.

The Public:
A new poll conducted just before the annual conference for the National Academy of Social Insurance (NASI) confirms that Americans, across party lines, just hate the benefit cut known as the chained CPI. Eighty-four percent believe current Social Security benefits do not provide enough income for retirees, and 75 percent believe we should consider raising future Social Security benefits in order to provide a more secure retirement for working Americans.

Reuters columnist Mark Miller writes about the poll, "We do not want benefits cut. If anything, we would like to see them strengthened. That's the view across all lines of political party, income level and age."

NASI's polling confirms that the vast majority of Republicans, Democrats, and Independents would rather see a tax increase than a benefit cut.

How Can They Still Be Trying to Cut Benefits for Current Retirees?
Americans are willing to raise taxes so why are we still taking about cuts? The NASI survey says that a big majority of 65 percent of Republicans, 68 percent of Independents and 74 percent of Democrats would welcome a tax increase with open arms if it would protect our Social Security benefits. So why has the President or anyone else been talking about cuts to our benefits?

Weeks after his Meet the Press appearance, at his second inauguration speech, the President sang a different tune. He said,

The commitments we make to each other through Medicare and Medicaid and Social Security, these things do not sap our initiative. They strengthen us. They do not make us a nation of takers. They free us to take the risks that make this country great.

But based on this week's White House remarks, he may have just been lip synching what the public wanted to hear almost as much as Beyoncé that morning. Will Washington politicians listen to their constituents during this new Congress and have a separate conversation about strengthening Medicare and Social Security by making the programs both solvent and adequate? Will they listen to the President's inauguration words, or to his words in the White House briefing room?

If the new Congress and our President want infamy as their legacy, they'll cut our benefits. If they want fame, they'll make history, and find a way to make crucial programs adequate and solvent.

To contact President Obama and urge him to keep his promise not to cut Social Security benefits for current retirees visit AARP here.