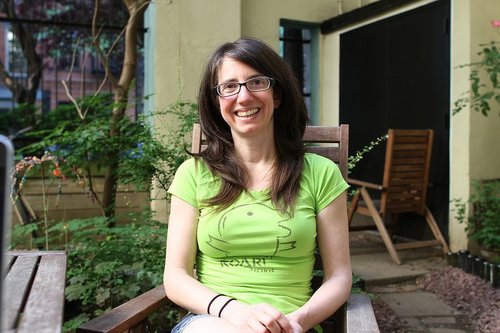 Crystal Skillman is an award winning playwright, who like her characters, is breaking through all kinds of boundaries. If we were to create a travel map of all the places Skillman's work is being done there would be pins in London, New York, Boston and currently Chicago, as her play WILD's World Premier opens June 15th with Kid Brooklyn Productions, under the direction of Evan Caccioppoli,

Skillman writes characters who explode with life, clawing their way off the page. It seemed only natural to explore where and how Crystal is creating work in a way that infuses life in three dimensions and so this PBS-meets-HBO-special idea materialized. The following vlog interview is the result. It includes footage of Crystal and her husband graphic novelist Fred Van Lente's (Action Philosophers, Cowboys and Aliens) home in Brooklyn. Special appearances by Van Lente, actress Megan Hill; performing (Colette) an excerpt from The Management's critically acclaimed production of CUT, and Diana Stahl performing (Nikki) an excerpt from WILD. With music by Leon Pease and Dave Strumfeld from "Mrs. Perfect and The Unexpected Return of Evil by Crystal Skillman. Directed, Filmed and Edited by Jody Christopherson.

Special thank you to School of Visual Arts.

See the extended video versions of Nikki and Colette's monologues and read the never before published Nikki monologue on: http://newyorktheatrereview.blogspot.com/2012/06/vlog-colette-cut-and-nikki-wild.html