This is getting ridiculous.

Despite several past examples of employees being disciplined for using racial slurs to label customers on store receipts, it appears a CVS employee in New Jersey has done just that, using a slur for Asians.

Attorney Susan Chana Lask said her client Hyun Lee, who is of Korean descent, used her real name when placing an order for photo prints at a CVS in Egg Harbor City in February. However, when Lee picked up her pictures, she was "very distressed" to find her CVS receipt read "Lee, Ching Chong," according to CBS New York.

The Smoking Gun obtained a copy of a complaint sent by Lee to CVS’s customer relations department.

“Do you think it’s funny? It’s very disturbing to me!!!!” Lee wrote, “why doesn’t he just call me Chink! It has the same derogatory meaning!!!!!”

In an emailed response, a CVS official said the employee, identified as William, would be be “counseled and trained,” according to The Smoking gun.

“There’s no amount, in my opinion, of training from CVS or any company that’s going to stop this kind of hate and bullying against someone’s race,” Lask said. “To me, this is something that deserves psychological counseling, not CVS counseling,” according to CBS.

“CVS/pharmacy is committed to treating all of our customers with dignity and respect,” Michael DeAngelis, a CVS spokesman, told ABC News. ”We have a firm non-discrimination policy."

The CVS incident is only the latest in a long line of similar problems, several of which have involved the same epithet directed toward customers of Asian descent.

In January of 2012, a customer at a Papa John's in New York City was furious to find her receipt contained the phrase "Lady Chink Eyes." Meanwhile, a Hooters in the Queens borough of New York City was sued in September of 2012 after a Korean-American discovered someone had typed "chinx" on his receipt.

Similarly, in 2011, a Chick-fil-A in Southern California fired one of its cashiers after a pair of college students received receipts labeled with the names "Ching" and "Chong." 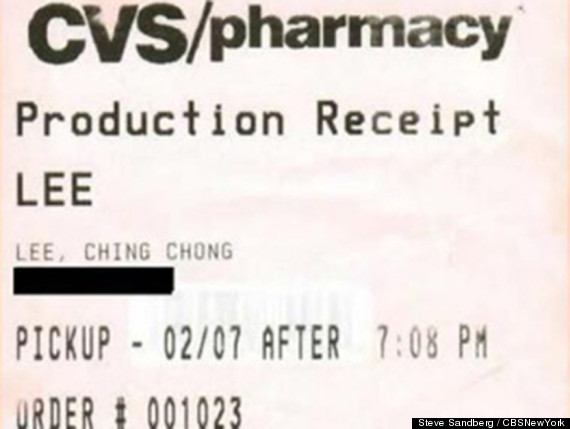