Tedeschi posted this to its Facebook page after Rolling Stone released an early peek of the cover, which is set to hit shelves Friday: 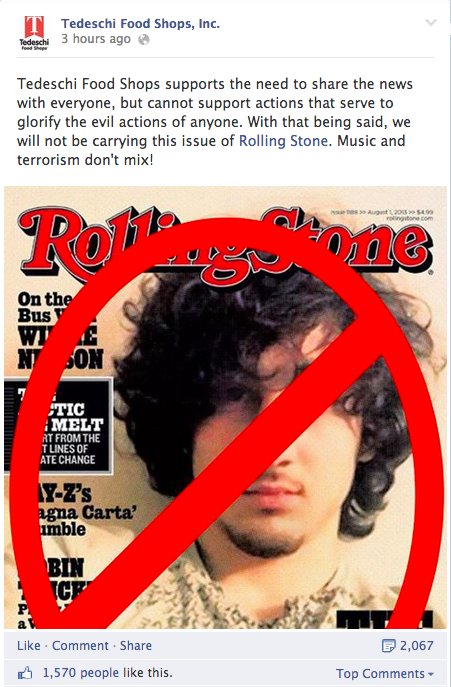 CVS confirmed in a statement that it won't be selling the issue.

"As a company with deep roots in New England and a strong presence in Boston, we believe this is the right decision out of respect for the victims of the attack and their loved ones," the statement reads.

Walgreens wrote in an e-mail to The Huffington Post that the drugstore chain also won't be selling the issue. The company also posted a tweet about its decision:

Thank you for sharing your thoughts with us. Walgreens will not be selling this issue of Rolling Stone magazine.

Rite Aid also won't be selling this month's Rolling Stone, according to a statement from the drugstore chain e-mailed to HuffPost.

"Out of respect for those affected by the Boston Marathon Bombing, Rite Aid has decided not to sell the August issue of Rolling Stone," the statement reads. "The issue is being removed from stores as it arrives from the distributor."

A Kmart spokesperson wrote in an e-mail to HuffPost that the retailer also won't be selling copies of the magazine, "out of respect for those impacted by the events of April 15th."

7-Eleven will not be selling the infamous magazine at company-operated stores, a spokesperson wrote in an e-mail to HuffPost. The convenience store will also be encouraging their franchisees to do the same. The decision comes one day after a spokesperson told HuffPost 7-Eleven would continue to sell the magazine.