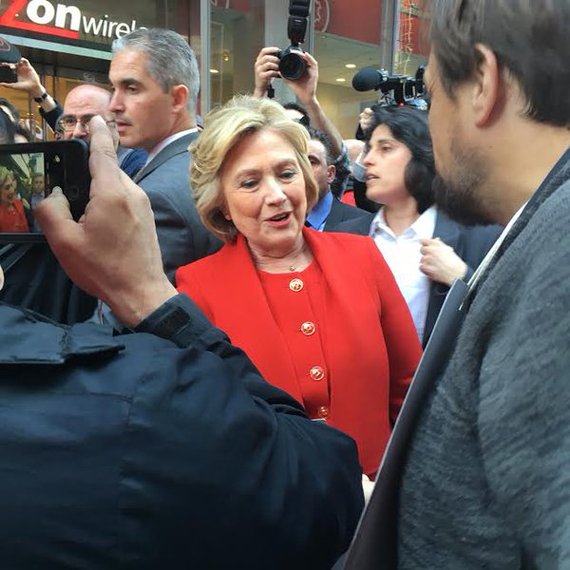 The nomination of Secretary Hillary Clinton for President of the United States at the Democratic National Convention this week is a historic step forward for our nation, and the Communications Workers of America and I are proud to stand with her to build an America that works for working families.

Hillary Clinton is smart, thoughtful, and experienced. She brings decades of commitment on behalf of working families, and for economic and social justice for all.

She doesn't just talk, she delivers. Her record of public service shows a leader who stands up for workers' bargaining and organizing rights, for family and medical leave, and other programs that help working families.

Secretary Clinton has pledged that she will "do everything in [her] power to defend American jobs and American workers. Any trade deal must meet three tests to earn my support: It must create good American jobs, raise wages, and advance our national security. I do not believe that the Trans-Pacific Partnership meets this high standard. That's why I oppose the TPP -- and that means before and after the election."

Clinton walked our picket line at Verizon. She was the first Senate sponsor of legislation to expand FMLA benefits for flight attendants. She supports comprehensive immigration reform, overturning Citizens United, and establishing a public campaign finance system. Hillary was an original sponsor of the Employee Free Choice Act, and she supports creating a $250 billion infrastructure investment program that would create hundreds of thousands of good jobs. She strongly supports expanding Medicare access to those between 55 and 65, and she has called for greater Wall Street accountability. She has called for expanding voting rights and ending the school to prison pipeline.

In contrast, the GOP has nominated Donald Trump, a dangerous phony who would be funny if he weren't so scary. Trump makes his money by cheating workers of overtime pay and fair wages, cheating contractors out of their fair earnings, and cheating students who signed up for "Trump University."

He talks a good game about bad trade deals, but manufactures his fancy ties and suits in China, Bangladesh, and Mexico. Trump thinks that American wages are "too high," he "loves" right to work (for less), and brags about fighting unions. "I fight the unions very hard," he told a South Carolina radio station.

The contrast couldn't be clearer. CWA has a large number of members and retirees in all the battleground states, and as union members and as Americans, we will put our full efforts into electing Hillary Clinton to be the next president of the United States.