Recently, Time magazine columnist Joel Stein wrote that he has decided he won't allow comments on his articles, as the comments invariably descend into crazy vitriol; and, writing a few days ago about the false tweet reporting explosions at the White House, Mark Mardell wrote for the BBC that "lies and truth" are now virtually impossible to separate. The Virginian-Pilot requires that commenters identify themselves to the paper by providing a credit card and address that must match. Vindictive, false accusations can be designed to undermine institutions and governments, to fool the press, and to hurt good people and good organizations. The consequences of some sticks and stones really do break bones.

Recently, PETA and other shelters who never turn animals away -- even if they are so sick, old, injured or aggressive that they can only be euthanized -- have been attacked by front groups like The Center for Consumer Freedom, who actively seek to upset any social cause, whether against drunk driving, low wages or animal homelessness, as well as by "no-kill" advocates who deny the heartbreaking crisis animals face because of casual acquisition and the lack of laws that would make spaying and neutering mandatory and breeding animals a "sin." Let me paint faces on some of the real people who bear the toll of this vitriol:

In 2008, a PETA fieldworker I'll call Nancy answered a frantic call on the emergency pager at about 1 o'clock in the morning. The caller had heard an animal crying. Nancy drove immediately to the scene and found two baby raccoons in a trash bin. They were soaked with fluid that had seeped out of the trash bags as well as with beer and rainwater. One was so near death that he was cold to the touch and unresponsive. He died before she got back to the shelter. The other baby wailed all the way. He was bloated and his eyes were sealed shut with crust and mucus. He was also dying but still conscious. She administered an injection of sodium pentobarbital and let the raccoon baby drift off to sleep forever.

In 2005, Nancy had spent weeks in Louisiana, wading through the gasoline- and waste-filled floodwater in the "war zone" left behind by Hurricane Katrina. She had been part of a team who had used bolt-cutters to get through fences and crowbars to jimmy open doors to rescue animals, feed them, and transport them to the huge temporary animal-holding facility at Lamar-Dixon Expo Center in Gonzales.

Arriving at one badly damaged house, Nancy spoke to a man tossing his salvaged belongings into a truck. Yes, he said, he had two dogs. He'd shut them in a room upstairs when he evacuated. He hadn't checked since he'd returned, but he "figured they were dead." Nancy ran up the stairs, opened the door and was hit by the stench of decomposing flesh. One dog was still alive but barely. Nancy carried her downstairs. "Go ahead, you can take her," the man said. Nancy placed the dying dog in her van. She never forgot that moment or seeing, time and again, that people had simply driven away, leaving their dogs to drown slowly in the rising waters.

The week she went out on the raccoon call, Nancy drove to a local hospital emergency room, realizing that she could no longer cope with the callousness and horror of what she saw happening to animals. Afraid of taking her own life, she committed herself into psychiatric care.

About a year later, someone I'll call Carol celebrated her 27th year in animal sheltering and cruelty investigations. She had worked for several shelters and, over the years, had taken a few mental health breaks but would always say, "Wherever you go, you can't escape what you know." Eventually, she tried another line of work but then, unable to turn away completely, started a program to provide neglected dogs stuck out on chains in the bitterest of weather with sturdy, straw-filled doghouses.

One day, visiting a trailer park, she found an old dog tethered in a dirt patch. A logging chain so heavy that it weighed almost as much as he did was locked around his neck. The dog's ribs protruded from his chest and his backbone jutted out. Although so painfully thin and neglected, he had still thumped his tail and looked up at her with hope. Carol started sobbing. She had cried before, but this time she couldn't stop. She had held it together for almost three decades, but in that moment, she knew that she could no longer face the never-ending cruelty. She had a nervous breakdown.

Some callous people work in animal sheltering, of course. But so do people who love animals with all their hearts. They hear people say, "I could never do your job, I'm too sensitive," but they can't walk away knowing that the sheer number of animals in deep trouble -- those who are simply unwanted or who are sick, injured, abandoned, or abused -- far exceeds the number of places to put them. They see how many litters are being born and how, in the scheme of things, how many people fail to sterilize their dogs and cats. Unless they shut the door and turn their backs, they must hold many of those animals in their arms and tell them they love them as they gently take their lives. Some shelters provide their workers with counseling for such stress, others don't.

Yet on blogs and in their comment sections, people like Nancy and Carol are attacked as "butchers," "killers," and "psychos" who "poison" animals and have "blood on their hands" by detractors who sometimes not only make deriding good people a near-career, but hide, as bullies do, behind the anonymity of made-up names, such as that of a Peanuts cartoon character who posted 375 anti-PETA comments over a period of two weeks. These people even maliciously repeat damning "evidence" that has been disproved in court.

What PETA does in bringing relief to animals in an appalling state or who have no chance of adoption is gloatingly mischaracterized by our detractors as a "secret" "slaughter" when it is neither. We and our staff and other shelter workers talk and write about euthanasia regularly and often. We want people to know what is going on and get involved by meeting with legislators to get laws passed, pushing for adoption, clamping down on breeders. We want workable solutions to the massive problems of animal abuse, abandonment, homelessness, and expensive veterinary care that many people can't or won't pay. Shouting the magic words "no-kill" is as ineffective as shouting "abracadabra," and simply demanding that euthanasia stop is not a solution, in fact it's cruel when the consequence would be animals left to languish unaided. How we wish no shelter had to take lives, but wishes and hatred don't solve the problem and helpful laws are fought by the breeders who are part of the mud-slinging on this and other sites but who do not identify themselves as such.

Imagine how it must feel to be one of the people who works in PETA's Virginia shelter and read this total fabrication posted by someone purporting to have volunteered there: The poster writes that "he" saw cats, puppies, kittens and dogs sitting in cages awaiting euthanasia, was told not to bother to give them food or water, and that a cat was ignored while giving birth. He says that he stole two kittens and has them now in his home, safe and sound. Another anonymous commenter not only reposted that piece of pure fiction five times but also added more lies, including that PETA rushes to disaster areas to euthanize animals before their owners can be reunited with them.

The facts are that PETA works hard to reunite guardians with lost animals (including flying and driving animals who had received long-term care arranged by PETA in Virginia after Hurricane Katrina back home again); we do not use cages to house cats, but guest rooms with beautiful views, comfortable furniture, toys, and treats; no cat has ever given birth or attempted to at our facility; unless they are going in for surgery, all animals always have water; no animals have ever been stolen or have disappeared from our care; and puppies or dogs aren't housed in cages at our facility -- we have comfortable rooms with couches and blankets and toys. 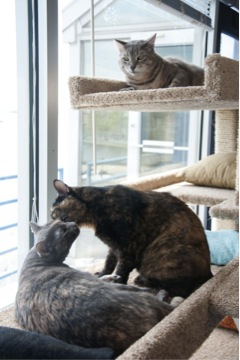 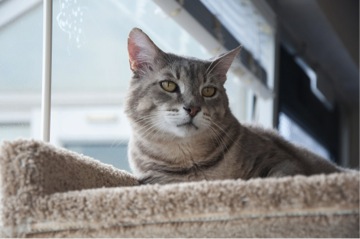 Moreover, dogs who stay in our shelter receive around-the-clock care, are walked in our adjoining dog park, are played with, and are given the love and attention that many of them have been denied their entire lives. Most adoptable dogs who do not go directly to a large, open-admission shelter -- the majority, hence they are not reflected in our numbers -- are fostered in real homes or can be found relaxing beside someone's desk, never ending up in hoarders' crates as they do when placed from shelters with low adoption standards. 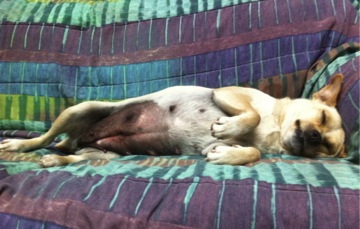 Cyberbullying can result in tragic consequences, including suicide, as we've seen in the news. The shelter workers and field workers who knock themselves out, day in and day out, night after night (for animal emergencies recognize no clock), deserve our support, not cyberbully spite.