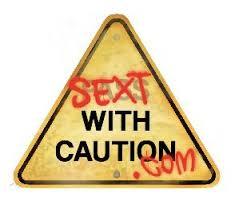 Technology, sex and flirtation have been in the news over the past several years. A congressman's career disappeared because of sexts in 2011, but his weinerisms remain ensconced on a Wikipedia page. 2015 brought a noted 60 Minutes journalist's sexts out in the open, but it appears he was more embarrassed over the messages where he bragged that he was Obama's "go to" interviewer. Humiliation seems to be oh-so-over as popular culture celebrates the "accidentally" released nude photos of various actors. The Washington Post published an article last year on how to sext safely. Adolescents are not exempt from the sexting phenomenon. They think it's just flirting.

The first text was sent in December 1992. By 2010, various sites were alive with cybering (cybersex). Sexting is short form. Cybering is long form. More emphasis on body parts and visuals for the former; context, and even scene, is significant in the latter, although erogenous zones are not ignored.

The question: is cybering and sexting about sex or is it the new flirtation? People used to flirt in bars, or at parties. I know this not so much because I did it, but because I watched my parents do it in bars and at parties. Usually one or the other would get jealous, and a fight would ensue. The key in this scenario is knowing when to stop, not crossing over that invisible line to adultery. Neither of my parents seemed aware of any lines anywhere. As a result, I grew into a straightforward non-flirter; if I wanted to have sex with you, you'd know it. That was in college and grad school. In the business world, sexual harassment was the byword and flirting was discouraged. Fine with me; I needed to focus. When my writing career began, an experimental and adventuresome side to me reawakened.

Usually Eros as Cupid is represented flying around or sneaking up on two human lovers with his quiver of arrows. Below is a rare print (in my experience) of Cupid kissing. Perhaps he has already shot himself in the foot and she is Psyche. 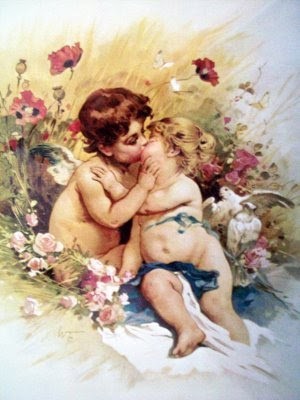 Is the shot in the foot the essence of Seduction? There are risks, to be sure, especially for married people.

I'm nothing if not goal oriented. In a chat room, a few men and one woman appeared to flirt with me. Presumably they were the gender claimed, but it didn't matter much to me: I wanted to play with words in a sexually explicit and creative manner.

Was this flirtation or seduction? During these provocative flare-ups, I liked myself very much. It was fun. The conversation nourished me in ways I hadn't acknowledged were important in my life. Reciprocity was key. So was good spelling.

But if one flirts, does that mean one is also open to seduction, and more importantly, can we want what we already have? Which brings me to the subject of my husband, who sat across from me in the den with his own laptop, listening to me laugh and type. Did he wonder what the hell I was doing? I figured there was no wondering or even thinking about me. Except for sex, he'd long ago dropped any pretense of trying to please me. That narrow focus was enough for a very long time.