Today I am turning 40. The BIG 4-0. Every year, starting when I was 29, I dreaded turning another year older. But finally after years of struggling with birthdays, I don't feel that way anymore.

My beautiful new bride Jen and I were in the office of an oncologist at one of the best cancer hospitals in the world. We had just learned that Jen had a rare type of cancer. Within fifteen minutes of learning this seemingly impossible news, Jen nodded and said, "I understand, but we've been trying to get pregnant, is that ok?" The doctor paused, and then replied calmly and directly, "I wouldn't do so unless Dave is prepared to be a single father."

If you've ever been crushed by a trash compactor or received a blindside hit from a blitzing NFL linebacker, then maybe you know how I felt at that moment. The air was simultaneously sucked dry from the room and from my lungs. As I struggled to find my breath, that 1 sentence cut through all the medical jargon and made the situation completely clear -- we were in a battle for Jen's life.

After Jen and I went through a range of emotions from anger and sadness to confusion and frustration, we found comfort by saying to each other, "Year by year, it's all unclear, but day by day, we'll find our way."

And so we set out, day by day, and more importantly, we set out together. We focused first on Jen's health, and I was with her every step of the way -- for hundreds of medical appointments, six intense surgeries, and twenty different types of chemotherapy.

We also focused on trying to make a difference for others. We did some research and quickly learned that Jen was not alone. When you add up all the so-called "rare" cancers like the one Jen was fighting, they actually account for over 50 percent of all cancer cases. The problem is that they often don't get the funding they need for research to discover new treatment options -- and as Jen's fight continued, the need for more treatments became all too real. We therefore created Cycle for Survival, which has now become the fastest growing athletic fundraiser in the country.

The next six years were a bit of a roller coaster ride. With her incredible spirit and tenacity, Jen would beat the cancer through chemo and surgery, but then it would frustratingly come back -- again and again. However, we didn't let cancer prevent us from living our lives, and we continued to happily find our way, day by day. As just one example, Jen landed an exciting new job. And Cycle for Survival was thriving -- in 2009 it became an official Memorial Sloan-Kettering Cancer Center event with Equinox as the founding partner.

Then, in the fall of 2010, when Jen was 39 years old, things became very difficult. The tumors were growing quickly, and none of the medications were keeping them at bay. Her abdomen and legs swelled to the point that she had trouble moving around. Things were looking so bleak that the doctors said it was unlikely Jen would make it through December, let alone to her 40th birthday in March.

But we never lost hope, and our tears of sadness were replaced by tears of joy when a new medication started to work against the tumors, and the swelling started to subside. As the swelling decreased, Jen's mobility improved, and she was even able to return to her beloved spinning classes in February and March.

March 21, 2011 was Jen's 40th birthday. That morning, she said to me, "Dave, I'm the happiest person in the world to be turning 40. Go get the camera." Before I even knew what was going on, the music was playing, and I was filming my wonderful wife as she celebrated with pure joy a birthday which many people dread.

Unfortunately, just a few months later, the new medication stopped working. Despite her incredible attitude, the most beautiful smile, and the best doctors in the world, Jen started to struggle again when the tumors continued to spread. Jen's doctor said to us, "I'm sorry, there's nothing more we can do."

Those were the most difficult words I've ever heard, by far. They are terrible words, and I hope no other family has to hear them.

Jen lost her battle on July 20, 2011. Jen and I had a lot of time to talk over the seven years she lived with cancer, and we even went so far as to write down our hopes for each other if one of us ever died. We both very much wanted the other to be as happy as possible, and to continue to smile, laugh, and live life to the fullest.

The first few months after Jen passed I had a ton of support, and the amazing people in my life kept me busy. However, gradually, as time passed, and the new "normal" of my life started to set in, I felt lonely. It really hit home around my 39th birthday last year. I had watched Jen's 40th birthday video a hundred times, and of course, I knew more than most that we should appreciate every day. But I just wasn't looking forward to turning 39 and did not feel like dancing. My future was unclear, and I was scared and struggling to find my balance.

I began to travel across the country with the Cycle for Survival team to spread the word about rare cancers. As I spoke at companies and conferences, I began to realize that each of us faces challenges in our lives. For me, it was Jen's health and losing the person who I wanted to spend my life with. For others I've met, it might be challenges with their kids or in their professional lives.

In thinking back to filming Jen's Happy to be 40 dance, and now in talking with so many inspiring patients, I now understand that we don't have control over the fact that we have to face these challenges. However, we very much do have a choice in how we face them.

It took me some time, but I made my choice. Even though it's too late to help Jen, I choose to do everything I can to help other rare cancer patients and to live every day to the fullest.

And yes, living every day to the fullest includes my 40th birthday today, and all of my birthdays going forward. So in honor of my 40th and in memory of my beautiful wife Jen, please take 90 seconds to watch Jen's Happy To Be 40 Dance video below. It's guaranteed to make you smile!

Do you know anyone touched by cancer? For each person who comments or shares the video, I'll donate $1 to cancer research and $5 for anyone who posts their own dance video anytime in 2013 and sends the link to cycleforsurvival@mskcc.org.

So who wants to join me on the dance floor for the sprinkler?

How to Dance After Losing It All
Cycle for Survival 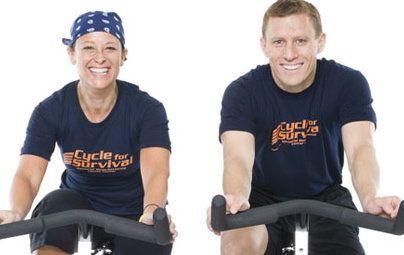 1 / 8
Dave and Jen Cycle for Survival