I took up cycling several years ago after reading multiple scientific studies concluding that the simple act of repetitive clockwise leg movement while hunched over and struggling to breathe (my definition of cycling) improves memory and concentration while reducing stress and anxiety. This being science, researchers no doubt spent astronomical hours and federal grant monies to recruit cycling enthusiasts, place them on stationary bikes, hook them up to heart monitors, take copious notes ("Look, Dr. Jackson, he's still pedaling! What do you make of that?") and then observe those same participants as they solved puzzles and engaged in cognitive activities.

Save yourself time and tax dollars, scientific community. Next time, simply hop aboard a bike and ride naked through a large metropolitan city.

Having recently completed Chicago's chapter of the annual World Naked Bike Ride, I heartily concur with the "cycling helps your brain" theory. For the record, I wore boxer briefs and a helmet, firm in my belief that nudity should always take a backseat to safety, particularly when one is riding up Michigan Avenue on wet pavement while high-fiving Uber drivers. And for those who feel my decision to ride partially clothed was somehow illegal, allow me to set the record straight. Total nudity is not a WNBR requirement; some participants wore full cycling attire while others bore all, much to the horror of young families strolling near the American Girl store on the Magnificent Mile.

Let's start with concentration. My prefrontal cortex - the portion of the brain that controls the ability to focus - was in fine form. Perhaps it was the random bare breast that appeared on my left, the occasional dick on my right (the anatomical variety, not the guy who cut me off on the Kinzie Street Bridge) or the body-painted butt in front of me proclaiming "Less Gas, More Ass" an event slogan coined to encourage more reliance on "people powered vehicles." 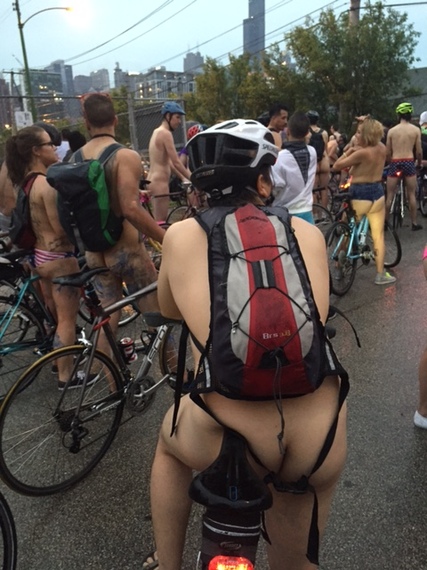 Alas, the cheap acrylic paint was no match for the recurring rain showers; the message slowly dissolved into its owner's intergluteal cleft while I pedaled and focused intently. Add that image to all the other stimuli flooding my acetycholine receptor and I felt confident I could work as the lone barista at Starbucks and correctly produce every order during the Monday morning rush, no matter how complex. This from a guy who, prior to the ride, could only half remember his wife's request to pick up ground beef AND toilet paper from the grocery store.

As the phalanx of nudity streamed up Rush Street, causing upper crust Gibson's Steakhouse patrons to whip out their cellphones for something other than trading stocks, my stress and anxiety levels evaporated. Granted, I was a bit anxious upon checking in for the event and realizing I could be riding alongside "Baby," a New York man whose cycling ensemble consisted of a Scooby Doo mask, ski googles and candy-striped underwear. But Scooby/Baby quickly melded into the crowd. I bonded with topless, 36-year-old Sarah, riding her fifth consecutive event and insisting she would continue doing so until "my boobs get caught in the spokes."

Anxiety free and armed with my newly returned abilities of concentration and memory, I began to exercise the capabilities of my brain's parietal lobe, processing auditory information, and committing it to memory via the hippocampus deep within the medial temporal lobe. In other words, here are things I overheard on the WNBR and will NEVER forget:

Even among nudists, Chicago is a hockey town.