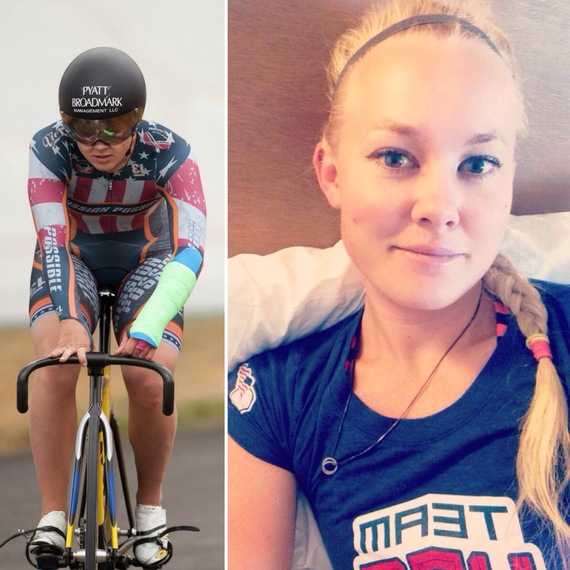 Every 98 seconds, an American is sexually assaulted. Every 8 minutes, the victim is a child. Thus, by the time you finish reading this article, another child will likely be victimized. There is an 82 percent chance that victim will be a girl.

In 2007 at 17, I was a victim of sexual abuse that changed my life forever. I didn't ask for it, and I didn't deserve it. But it was real, and it happened.

Missy Erickson shared this on Facebook a few weeks ago. Erickson is a world-class competitive cyclist whom I profiled earlier this year. At the time, I focused the story on the traumatic accident she overcame to continue her quest to represent our country in the Rio Olympics. I had no idea about the even greater challenges she had already surmounted.

I attempted suicide twice, I had an eating disorder, and I struggled with depression for years following.

I reached out to Missy to ask if she was willing to share more. She readily agreed -- in order to help others recover from similar ordeals. Her potential audience is huge and, challengingly, ever-growing: one in 9 girls under the age of 18 experience sexual abuse or assault at the hands of an adult, and females ages 16 to 19 are four times more likely than the general population to be victims.

Erickson said she was abused by "someone very close to me. I was young and innocent," she shared by phone from her home in Pennsylvania recently. This is common, as 93 percent of child victims know the perpetrator. Erickson's parents were going through what eventually ended in divorce, and her abuser took advantage of her vulnerability during that time, she told me. "I needed somebody to confide in, and be close to."

As with many victims, Erickson kept silent about what had happened to her and blamed herself. She did not talk to her parents for fear of being an undue burden on them. "I didn't tell anybody until I was 22 or 23," she said. Even then, it was three more years before she felt comfortable enough to share publicly.

Erickson saw a therapist throughout college, while her cycling career was beginning. The abuse affected her college years in several ways. "I wasn't comfortable in groups of people, or going to college parties, and I shied away from relationships," she said. "I didn't want people asking me questions."

Through all of this, riding her bike kept Erickson sane. "Cycling took me out of it. I could go for a long bike ride and forget about everything. The more I won, the happier I was, so I wanted to win a lot," she said. "That made me successful, but it also masked my pain."

Although Erickson's Olympic dreams were derailed by a tragic training accident in 2015, her accomplishments are extraordinary: she has won six National Championships, as well as claimed over 35 international wins.

Last spring, Erickson made peace with the fact that she would not be competing in Rio in 2016 and moved from California to Pennsylvania to focus on her business, ERO Pennsylvania, which provides aerodynamic testing and bike fitting for cyclists. Spurred by the self-reflection that came with the decision to take a step back from cycling, she felt compelled to open up publicly about her past.

"I needed time," she said. "I didn't know how to deal with it. I didn't come to the realization that it wasn't my fault, and that it was wrong that it happened, until I was 20 or 21. When I realized that, I needed more time to try to understand it, and to find ways to talk about it."

Erickson now believes she has a responsibility to speak up in order to stop the shame and the victim-blaming. "You need to be able to protect other people," she said. "You spend a long time blaming yourself for things, and there's a lot of fingers pointing. People say 'what were you wearing,' or 'why were you in that position?'"

Her solution to this pervasive issue in our society? Education -- for girls and boys.

"Girls are being blamed for what they wear, or how they walk, where they go to school, the silliest little things," she said. "We're just expected to know that this happens. Girls shouldn't have to know how to defend themselves or learn martial arts. It should be ingrained into our culture, for guys and girls, that this is wrong. Taking advantage of somebody is wrong. Using your power over somebody is wrong."

While not all memories are pleasant, they have all made me who I am today. I chose to no longer be a victim, and have overcame injury to become everything I wanted.

With distance now from her past and from the accident that erased her Olympic dreams, Erickson no longer feels compelled to race ahead to escape her past. "I don't need cycling anymore to cover up those feelings," she said, "because I'm okay now." She rides her bike now for enjoyment and fitness, not necessarily to compete. With her business and "four happy dogs," she has other things to focus on.

Whatever she decides about 2020, Erickson is content and came through her hardships okay. She wants girls everywhere to know that they can, too.

To the girl who was likely victimized in the time you read this, Erickson wants her to know that "my abuse could have ended my life, but I'm still here. You can do great things."