Cycling Has An Image Problem
For the last five years the bicycle has been my sole means of transportation, and I happen to feel pretty good about that. Sure, it means my carbon footprint is smaller and I save money on gas and insurance, but what really matters to me is that cycling keeps me in shape and is fun, and I love the beauty and technology of bicycles. In fact, when I complete my masters degree and start earning more money, my hope is not to be able to afford a Mercedes, but rather a carbon fiber race bike. Unfortunately, for most people the bicycle is something you use for transportation until you are successful enough to buy a car; that the bicycle is not seen as a sexy, technologically advanced machine worth aspiring to tells me that cycling has an image problem. 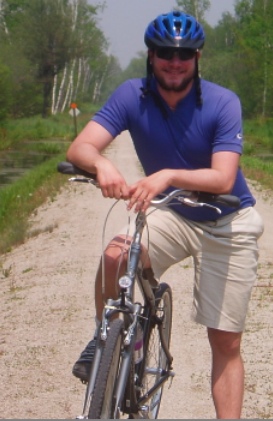 This image problems crops up in numerous T.V. shows and movies. One example is The 40 Year Old Virgin, where Steve Carell, in the role of a loser, rides his bike everywhere. The message that is constantly conveyed is that not only is cycling for transportation inconvenient and dangerous, it's also a sign of failure. It isn't surprising, then, that people aspire to purchase a better, faster, sexier car: that's what signifies that one is moving up in the world. What's more, any 'Ten Things You Can Do for the Environment' list will invariably include cycling, which turns a simple bike ride into some sort of heroic act instead of what it is: fun and good for you. And, as I pointed out last week, people don't want to be heroes, they want to work for a better world by having fun and using their creativity and talent to solve problems (think of a kind of Google workplace for saving the world).

Electric and Hybrid Cars: Sexy and Low Emissions
Now there's nothing wrong with sexy cars. For example, the Tesla Roadster is sleek, aerodynamic and can silently accelerate from 0-60 in 4 seconds thanks to its electric motor and advanced lithium ion battery pack. The problem, then, is the kind of sexy car we have traditionally idealized: loud, powerful and polluting. Fortunately, gas prices and awareness of climate change have helped to establish a new ideal: the hybrid, exemplified by the Toyota Prius. This has been a great development both because not everyone can or wants to ride a bicycle, and because hybrids and electric cars typify the kind of technological advancement that inspires and excites.

The Bicycle is Worth Aspiring To
But while hybrids have dramatically altered the image of the vehicle, the bicycle is still seen as a backward, slow toy that is better suited to starving college students and racers than to adults with errands to run. Yet bikes today are more comfortable, light and advanced than ever before: carbon fiber, titanium, hydraulic disc brakes, LED headlights and GPS units are things one expects to find on fighter jets, race cars and the family sedan, yet they are becoming ubiquitous on $2,000 bicycles. And there are myriad bike racks, trailers and panniers (saddle bags) that can enable one to do anything from shop for groceries, to commute to work, to haul a fridge. The fact that one can get into bicycling with a $200 investment in a Wal-Mart bike, and move on up to a top-of-the-line, $6,000 race bike, means that cycling is accessible and meaningful to anyone from a Wal-Mart employee with no car to a Wall Street executive with ten cars.

Change the Image, Change the World
So as gas prices rise and hundreds of millions of people around the world become wealthier and aspire to car-ownership, let's keep a few things in mind. For one thing, there's no reason why car-ownership has to be a problem, provided that the public demands--and the automakers build--exciting, affordable, efficient vehicles. But if we can change the way cyclists are perceived we can create a paradigm shift in what individuals do with increasing wealth. Just imagine hundreds of millions of people in China, India and America happily riding carbon fiber bicycles alongside carbon fiber plug-in hybrid electric vehicles. Sure, getting there will require a lot more than a change in values: we need policy changes and the infrastructure to make cycling safer and more convenient, as well as a renewably-powered, electrified transportation system. However, as long as cyclists are seen as losers, the bicycle will lose out to the hybrid. And given the scale of climate change and the geopolitics of oil, that would mean that we all lose.