Shocking is the only way to describe the extraordinarily cynical comments made to the Financial Times (November 4, 'Global Warming: Climate change needs action but it has a cost') by Milton Catelin, chief executive of the World Coal Association, in trying to downplay any idea that climate change may make coal a risky investment.

"So, I don't know why you would assume action on climate change is more likely than action on poverty," was Catelin's cavalier reassurance to allay any investor anxiety.

Sadly, he has a point, in that the world is failing to meet its commitments to the poor just as it is failing to rise to the threat of runaway climate change.

Yet, whether his comments were made off-the-cuff, and without thought, or that he is so confident that he doesn't feel the need to mask his true opinions: he is as outdated in his thinking as the industry he seeks to protect and promote.

As Catelin was trying to secure private profit at the expense of people and the planet, PriceWaterhouseCoopers (PwC) was warning of the consequences of runaway climate change. In its report, 'Low Carbon Economy Index,' published on the same day, it warns that a failure to tackle carbon emissions threatens 6 degrees C of warming by the turn of the century. Such a scenario would of course make poverty permanent and add billions -- people not dollars, it would be tens of billions of dollars -- to its toll. PWC is not focused on ending poverty -- nor are they hiding behind it -- they are about promoting investor posterity. The world they foresee does not tie with that being promoted by Catelin and the World Coal Association. No! They warn of policy panic and massive fossil fuel stranded investments.

So, rather than point out there will be no "concerted action on climate change" PwC sees it as necessary to prevent their clients from becoming poor.

It is the poor who will be, and are being, the fastest and hardest hit by climate change. But, Hurricane Sandy and PwC forecasts are just the latest clarion calls for climate action. 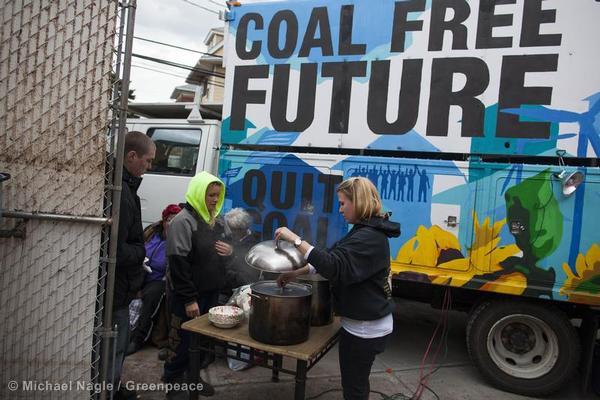 Volunteers hand out hot soup to residents at a donation collection/distribution center in the Rockaways, days after Hurricane Sandy.11/02/2012
© Michael Nagle / Greenpeace

PwC were joined in issuing stark warnings about inaction on climate change. The World Bank is equally frightened. On publishing its "Turn Down the Heat" report this week, World Bank President Jim Yong Kim said "It is my hope that this report shocks us into action." Again starkly different from Caitlin's complacent fossil fuelled view.

The United Nations climate negotiations will commence in just a few days in Doha (Qatar), momentum is building with scientific warnings, finance sector warnings underpinned by extreme weather events. The questions is: Are politicians listening? Will the reelected Obama administration change its tune and rein in the wrecking crew it usually sends to the climate talks? Will developed and developing countries step back from mutually assured climate destruction and enter a new cooperative dialogue?

Everything is connected and to address the biggest challenge humanity is facing, the effort needs to be cooperative, collaborative and comprehensive. The world needs the investor community to make smart and ethical investments. We need win-win investments that tackle global poverty and inequity at the same time as ending the threat of runaway climate change. If we are to survive, the investment community needs to divest from climate change wreaking fossil fuels and switch to safe, clean, job creating renewable energy sources.

We need our leaders, business and political to stop waiting for the other to blink. We need them to act on what they know and not on what they think the other is prepared to do. Somebody has to go first.

We need real business and political leadership, and not the cynical self-serving delusions of Milton Catelin of the World Coal Association.

In the end, climate change does not discriminate between rich and poor and nature does not negotiate.