By Michael Winfrey and Robert Muller

PRAGUE, Nov 30 (Reuters) - When Czechs cast the lone European "no" vote against the Palestinian Authority's bid for semi-statehood at the United Nations this week, it was no surprise from a country Israel has named as its best friend on the continent.

Once the punchbag for aggressive neighbours before World War Two, the central European state of 10.5 million has long backed the Jewish state and its main ally, the United States.

On Thursday, the Czechs joined Israel, the United States and six other nations in voting against a motion to grant the Palestinian Authority observer status at the United States as a "non-member state". Of the 138 "yes" votes, 14 came from European Union states. The other 12 EU countries abstained.

A main reason is a centre-right government that has distanced itself from the European mainstream on issues ranging from diplomacy and security to economic policy, often siding with Washington rather than fellow EU members.

But history also plays a role. Israel can thank the former Czechoslovakia for gaining the upper hand in the Arab-Israeli War in 1948, when Prague broke a U.N. embargo to send it weapons, including 80 planes, and train pilots including future Israeli President Ezer Weizman, tipping the balance.

"Israel has no better friend in Europe than the Czech Republic", Israeli Prime Minister Benyamin Netanyahu said during a visit to Prague in May of this year.

At the time, his Czech counterpart Petr Necas related Israel's situation to that of former Czechoslovakia, which lost land to Germany, Poland and Hungary on the eve of World War Two.

"We've got a special feeling for Israel's situation - that of a small nation surrounded by enemies," Necas told the Jerusalem Post.

Pundits say the government's pro-Israeli stance could also be a reaction to its trying to undo the legacy of a Czech Communist regime that severed diplomatic ties with the Jewish state after the 1967 Israel-Arab Six-Day War.

The Communists also later supported the Palestine Liberation Organisation when it was in open conflict with Israel, training its operatives and awarding its leader Yasser Arafat the highest state medal.

That ended with the fall of the Iron Curtain, and in 1990, Prague restored diplomatic ties and then Czechoslovak President Vaclav Havel visited Israel on one of his first foreign trips.

CLOSER TO US THAN EU

During the fighting between Israel and Hamas this month in the Gaza Strip, the Czech Foreign Ministry joined other European countries calling for an end to the violence.

But it underlined it "fully recognised Israel's right to self-defence against rocket barrages carried out by the military organisations in the Gaza strip", a sentiment absent from statements from the French and British but one closely resembling comments from U.S. officials.

On Thursday, the Foreign Ministry said the Czech Republic voted against the Palestinian motion because it feared it may further delay peace talks and said a two-state solution was only possible via direct negotiations, again echoing the U.S. stance.

Prague's support for the Jewish state also reflects an ongoing push by Czech centre-right politicians to build stronger ties with Washington and the euro-sceptic tendency of the two main ruling parties, Necas's Civic Democrats and Top 09.

"There is no common EU position ... I think it will definitely complicate future negotiations," said Civic Democrat lawmaker and presidential candidate Premysl Sobotka.

The opposition Social Democrats take a more mainstream European approach, while, partly staffed by dissidents who opposed the Communists in the Cold War era, the centre-right lobbied hard last decade for the establishment of a U.S. radar base and staunchly supported the U.S.-led wars in Iraq and Afghanistan.

The opposition said the U.N. vote would isolate the Czechs.

"I regard it as a mistake ... It shows the Czech Republic is travelling its own road and does not care about European policy." (Writing by Michael Winfrey; Editing by Jon Hemming) 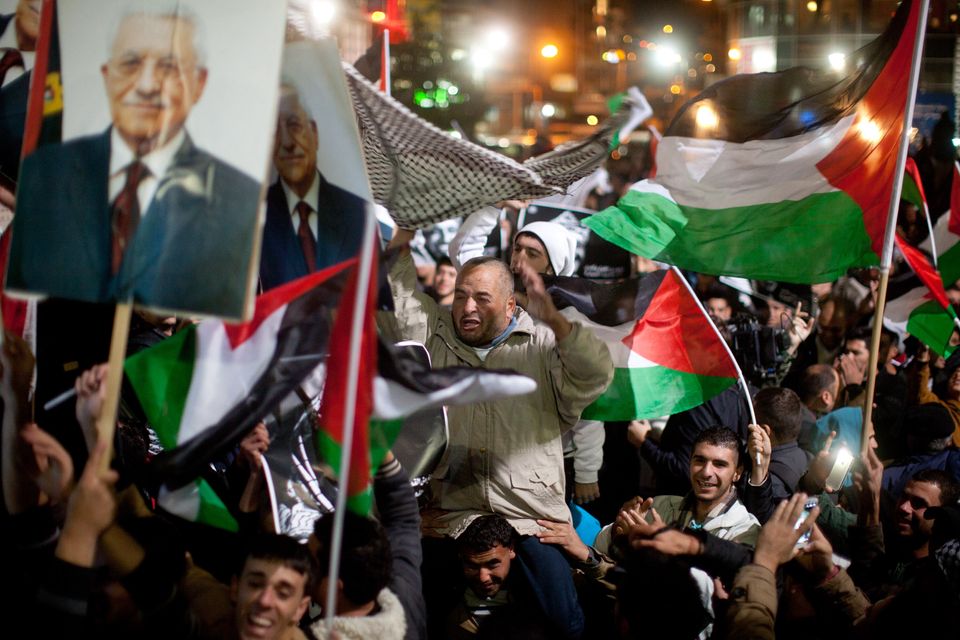 1 / 13
RAMALLAH, WEST BANK - NOVEMBER 29: Palestinians celebrate in the streets on November 29, 2012 in Ramallah, the West Bank. The U.N. General Assembly today voted 138-9, with 41 abstentions, to upgrade the Palestinian Authority's status to non-member observer state. Among nations voting no were the U.S., Israel and Canada. (Photo by Uriel Sinai/Getty Images)
Photo by Uriel Sinai/Getty Images