That's how the BBC first told its listeners about the Normandy invasion on June 6, 1944. The push into Nazi territory by Allied forces had been expected for months, but nobody knew exactly when it would come. War journalism was a highly censored business, so the first way people found out that D-Day had happened was when the military issued communiques from the front.

Here's what the BBC report sounded like. The man who read "Communique Number One," confirming that D-Day was here, was John Snagge. His audience would have been under no doubt that he was transmitting news of the most sensational kind:

Americans listening to CBS and NBC Radio found out about D-Day from an unexpected source: the Nazis, who flashed news of the invasion all over their radio service.

"The news to this moment is all supplied by the enemy," CBS reporter Irwin Darlington told his audience. "There is no Allied confirmation."

NBC's announcer warned listeners that the Germans could be faking the news in the hopes of "upsetting patriot plans inside the conquered countries."

Eventually, Americans got their confirmation. They also got an unbelievably riveting recording from George Hicks, a London-based journalist who was on the deck of one of the ships storming the beach. His dispatch was played on all the major networks. The noise was incredible. Hicks maintained his cool throughout, even as gunfire went off all around him and planes fell out of the sky.

"If you'll excuse me I'll just take a deep breath for a moment and stop speaking," he said at one point.

After that came the written dispatches. There were scores of journalists embedded with the Allied troops–among them such superstars as Walter Cronkite and A.J. Liebling. Here's how the Associated Press report of the landing, which was carried in newspapers everywhere, began:

Allied troops landed on the Normandy coast of France in tremendous strength by cloudy daylight today and stormed several miles inland with tanks and infantry in the grand assault which Gen. Dwight D. Eisenhower called a crusade in which "we will accept nothing less than full victory."

The headlines were equally effusive: 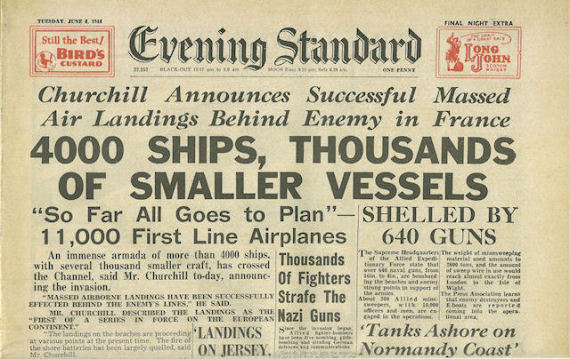 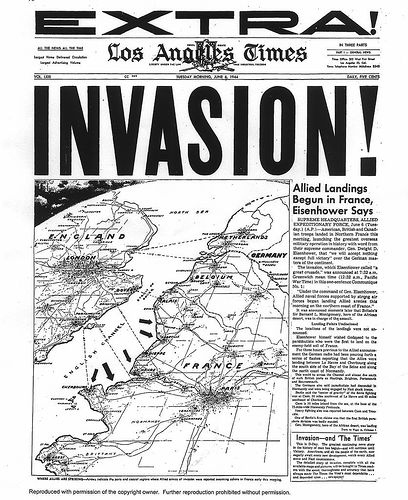 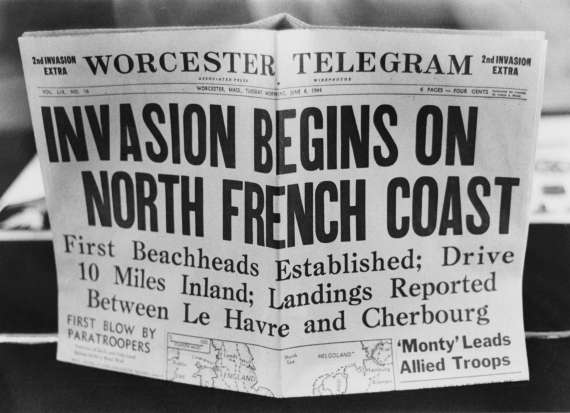 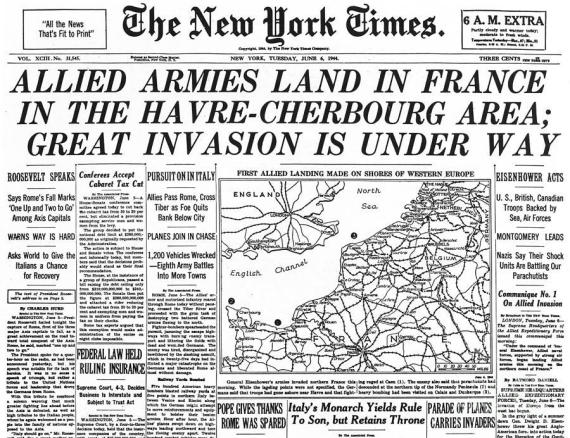 One word not seen in the AP's report: "casualties." Most dispatches steered well clear of the carnage on Omaha Beach. Thousands and thousands of people were killed.

10 days after the invasion, though, the legendary war correspondent Ernie Pyle went back to the beach. The column he wrote conveys some of what he called the "awful waste and destruction of war":

I took a walk along the historic coast of Normandy in the country of France.

The wreckage was vast and startling. The awful waste and destruction of war, even aside from the loss of human life, has always been one of its outstanding features to those who are in it. Anything and everything is expendable. And we did expend on our beachhead in Normandy during those first few hours.