Older entrepreneurs have an ace card when it comes to public relations. They have developed contacts and resources over the years to makes it easier to get the word out about their businesses to colleagues. Word of mouth is still king but today it's often done over social media and that's where a lot of older entrepreneurs fall short.

I had the pleasure of interviewing the wonderful Christina Daves who is the do-it-yourself public relations queen. Daves taught herself everything she now knows about PR after she broke her foot and had to wear a medical boot. She invented accessories for her boot and marketed the accessories with no money after using her finances for her business. And boy did she learn, Daves appeared in more than 50 media outlets in just one year, including The Steve Harvey Show, Dr. Oz, NBC, FOX, CBS, in Parenting magazine, and the Washington Post just to name a few. 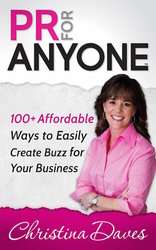 Christina Daves is the author of PR for Anyone available at Amazon.com

So many companies are fighting for consumer attention on the Internet. Daves says the way to stand out in the crowd through the Internet noise is to be active on social media. "Social media has made word of mouth much bigger," said Daves. "Engage with your followers and let them know that you're listening."

PR TIPS FOR OLDER ENTREPRENEURS
Daves had these tips for entrepreneurs trying to get the most bang for their buck with their public relations plan.

Daves says, it's important to develop relationships with journalists and it's okay to keep pitching them different stories each month. Know that some magazines have a four-month lead time, so get started early. "I will send an email [to the reporter] and then follow up with a phone call," said Daves. If you don't hear back right away, it doesn't always mean instant rejection, it sometimes means "no for now." Daves received one response from a magazine an entire year after sending the editor an email.

The key to winning the PR game is to be consistent, check HARO on a regular basis, follow up with reporters and keep looking for new opportunities daily. Eventually you will experience success and once you find what works, keep that going with similar media outlets.

Janice Celeste is the founder of the Encore Entrepreneur Institute, an advocacy organization for entrepreneurs ages 50+. You can catch her on Twitter and on her Blab live stream show, ENCORE @EncoreInstitute.

Business Public Relations Do It Yourself Janice Celeste Newspapers