Spike Lee, the old guard of black indie filmmaking, gets his mojo back with this classy, urbane, bloodsucking art film that is a beauty to behold. Sophisticated, demented, eerie, erotic--prepare to be shocked and flabbergasted. 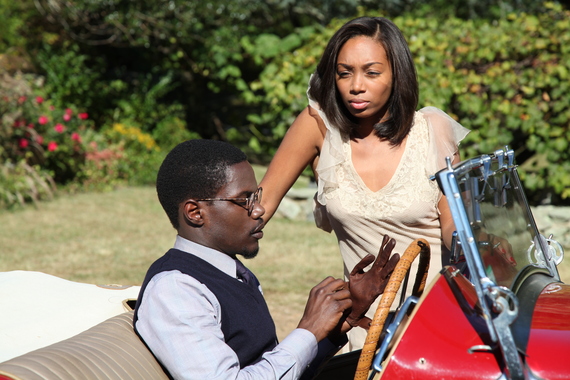 The root of the script is Bill Gunn's 1973 blaxploitation film, Ganja & Hess. Lee takes some liberties, but Gunn's stable, jaded storytelling holds its own 40 years later. An anthropologist, Dr. Hess Greene (Stephen Tyrone Williams), is stabbed by an art curator, Dr. Hightower (Elvis Nolasco), with an Ashanti artifact. Mysteriously that event changes his drink of choice to hemoglobin, and he prefers the brand that runs through women's veins.

Greene, a wealthy erudite man, alternates his time between a swank New York apartment and a tony house in Martha's Vineyard, where he has a "Man Friday," Seneschal (Rami Malek, Ain't Them Bodies Saints). Three is not a crowd when Hightower's wife, Ganja (Zaraah Abrahams), knocks on his door looking for her man. Blood for two, anyone?

There is a good chance that you will sit through the 123 minutes, wishing someone (editor Randy Wilkins) had done just a little clipping here and there. You won't, however, question the evocative cinematography (Daniel Patterson, Gunhill Road), the impeccable set decoration (Philippa Culpepper) and production design (Kay Lee, Blue Caprice), the natty costumes (Ruth E. Carter, Lee Daniel's The Butler) or the entrancing musical score (Bruce Hornsby). Those elements are perfect and lift this film up.

Williams as the reticent, elegant Dr. Greene has a mystery about him. Abrahams brings a bit of fire to her lady-who-gets-turned role. Rami Malek chews up the scenery like it's a pack of bubble gum. All are perfectly cast, fresh, almost unknown faces that don't take away from the story. They are pawns, muses.

The footage feels like that of a commercial director mixed with a filmmaker's sense of drama. The attention to the visuals, the pacing, getting the cast to act in a very even tone throughout is the mark of solid direction. This is a very consistently told film. There are no hiccups. None.

Lee eschewed the usual studio funding and raised the film's $1.5 million budget by conducting a Kickstarter fundraising campaign. He didn't have to answer to any studio executives, so it's safe to say he did what he wanted to do. If his aim was to make a very tense, graphically brutal and sexy film that haunts you long after you leave the theater, he has succeeded.

After two-hours of witnessing this throat-munching movie you will need a stiff glass of something to calm your nerves. Don't make it a Bloody Mary. Trust me.

The job of a good horror film is to creep you out. This stylish and very jaded one does that.