Researcher Maurizio Seracini's controversial quest to unearth a legendary painting by Leonardo da Vinci has been suspended, leaving the Renaissance work a mystery.

Seracini's hunt seems ripped from the pages of Dan Brown's "The Da Vinci Code." (In fact, Brown does namecheck Seracini in his thriller.) But this very real saga began in 1975, while Seracini, an Italian engineering professor, took a break from teaching at the University of California at San Diego to study the Giorgio Vasari fresco "Battle of Marciano" in Florence. According to NBC news, Seracini "noticed that a soldier in the fresco waves a flag reading "Cerca Trova" (Seek and Ye Shall Find)." The curious professor interpreted the phrase as a message hinting at the location of a legendary lost da Vinci masterpiece.

The masterpiece in question, "The Battle of Anghiari," dates back to the early 1500s. According to legend, da Vinci never completed the piece, due to hiccups in his unusual method of mixing oil paint and fresco. The painting disappeared after restorations on the Palazzo Vecchio in Florence, where it originally hung. In 1563, Vasari painted over one of the Palazzo's new walls with his mural, the very one Seracini believes is an encoded map to da Vinci's work.

For decades, Seracini has been engaged in a laborious hunt, reports NBC, installing sixty probes fitted with cameras into tiny holes he drilled (with permission of the Italian government) into already fissured points in Vasari's fresco. His goal was to view what he believes is an intermediary space between the wall and da Vinci's painting.

This March, Seracini reported the findings of his experiment to Reuters: "traces of pigments that appear to be those known to have been used exclusively by Leonardo." According to Discovery News, electron microscope scanning revealed the black material Seracini found bears a chemical makeup consistent with the pigment used in da Vinci's "Mona Lisa" and "St. John the Baptist."

So why abort the mission? As the drill-happy operation may suggest, the Vasari attracted its own protectors in the face of Seracini's preference for da Vinci's work.

Director Cecilia Frosinini resigned from her position at the Opificio, a government art restoration center, to protest drilling the Vasari. Discovery reports that Frosinini called the matter "an ethical question," adding, "I'm supposed to protect the artworks, and here there is an invasive intervention on the painting." The nail in the coffin sounded this summer, when a museum official ordered the holes in Vasari's fresco be filled in, and the scaffolding removed.

Mysterious Da Vinci Painting, 'Battle Of Anghiari' Will No Longer Be Hunted (PHOTOS)
Battle of Anghiari 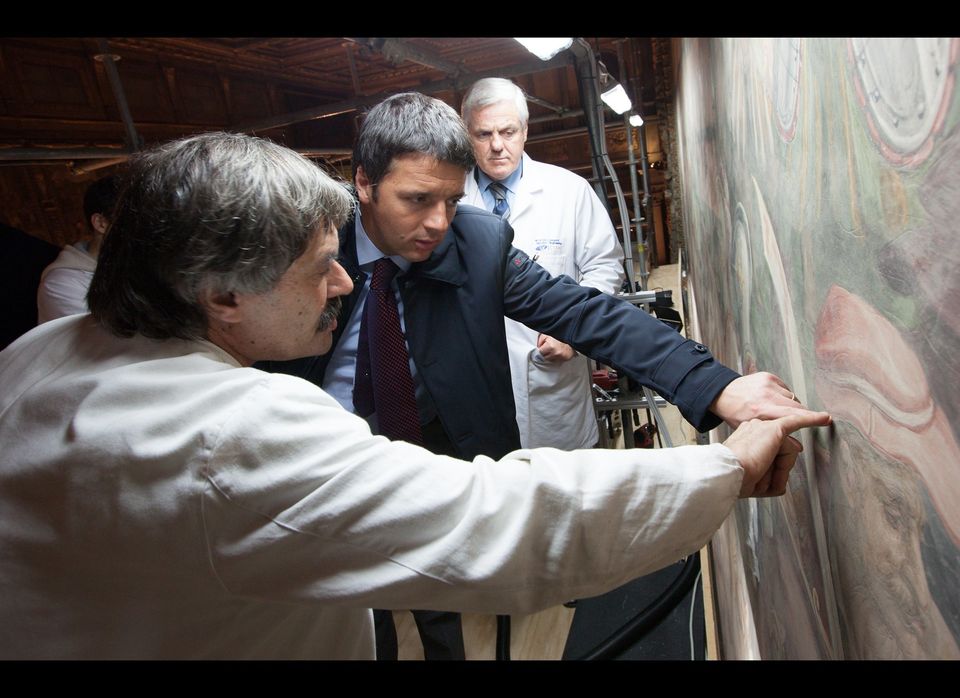