What goes on in the mind of genius?

A new exhibit at the Minneapolis Institute of Arts seeks to answer that question by examining Leonardo da Vinci’s Codex Leicester: a 500 year-old notebook containing his 72 pages of cross-disciplinary ruminations. The Renaissance polymath muses on why fossils form, how water flows through spaces, and why the moon produces light -- all with artful pizzazz.

Exhibition curator Alex Bortolot told The Huffington Post that Leonardo “understood the world in terms of macrocosm and microcosm: the structure of the whole is reflected in the parts." The artist would often use his knowledge of small systems to explain much larger ones, linking the patterns of human beings to those in the larger world. This was one reason that Leonardo made so many remarkable scientific discoveries despite lacking access to modern scientific technology. 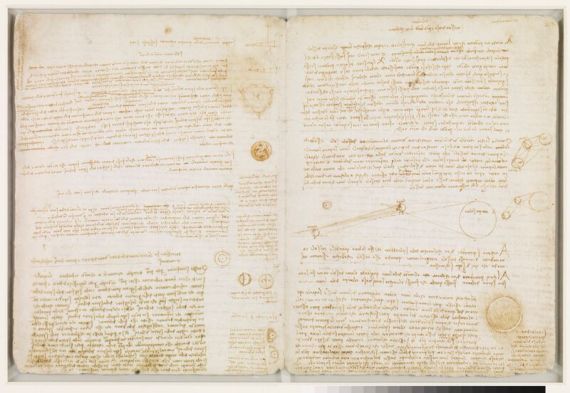 Here's a short excerpt to give you a taste:

"The body of the earth, like the bodies of animals, is interwoven with a network of veins which are all joined together and are formed for the nutrition and vivification of the earth and of its creatures..."

Poignant analogies are not the only notable element of the Codex. It was written backwards so that the left-handed genius would not smudge the ink, and it remained a collection of scattered pages until after Leonardo died in 1519 -- though it's now been returned to its original state. Here's another of his beautiful musings:

“I once saw such winds, raging around together, produce a hollow in the sand of the seashore as deep as the height of a man, removing from it stones of a considerable size, and carrying sand and seaweed through the air for the space of a mile and dropping them in the water.” 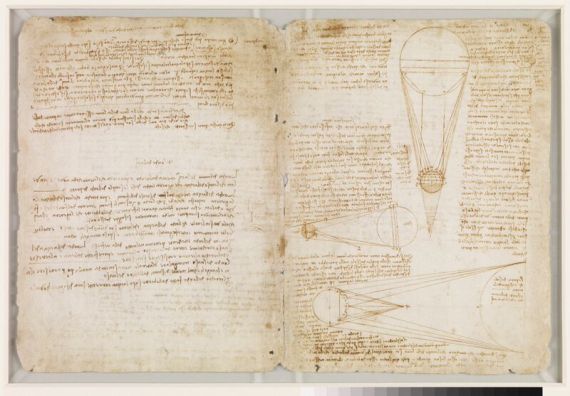 On a less poetic note, the Codex set the record for most expensive book at auction when it went for $30.8 million to Bill Gates in 1994. Since then, Gates has loaned the codex out liberally, to museums from Sydney to Tokyo to Dublin -- and now in Minneapolis.

MIA’s show, however, is not just a showcase of this one notebook. It uses Leonardo’s codex as a jumping-off point to explore the broader phenomenon of artistic design. To this end, it’s brought together four very different design projects:

1. Bill Viola’s “The Raft”: a video featuring a group of people huddled close as they’re bowled over by a massive deluge. This commentary on communal support and environmental disaster is shown with Viola’s designs for the work. 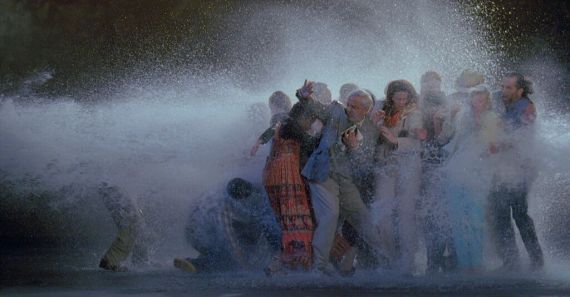 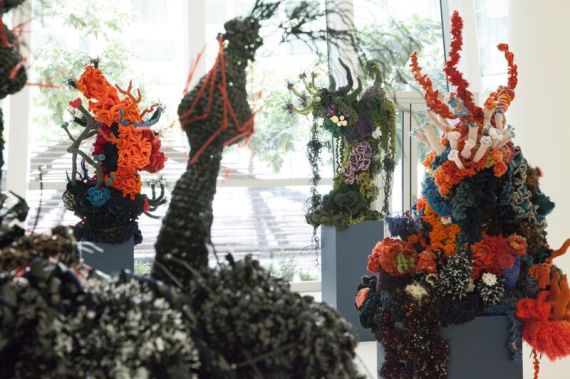 3. Scott Olson’s designs for revising “inline skates”: the basis for the modern roller skates from which Olson made millions

Each of these projects builds off the spirit and legacy of Leonardo. His writings continue to fascinate us -- and fetch high price tags -- because they give access to someone who so fully embodied the role of creative entrepreneur.

Leonardo would probably have happily crocheted a coral reef one day, designed safer vehicles the next -- and linked each small discovery to a universal phenomenon. That radical openness, perhaps, is the true mark of his genius.