"What I am about to do is the greatest discovery in the art world," the man next to me declared at the dinner table. I always imagined those who spend their lives on quests to uncover priceless, long-lost treasures to resemble an Indiana Jones character--the swash buckling type, wearing a leather jacket and a fedora, and armed with a bull whip. But this man who was seated next to me at a Friends of Florence dinner was a stately, scholarly gentleman, dressed in an Italian suite, whose neutron generator is the accessory of choice.

Professor Mauricio Seracini, who is the director of Calit2 based center of interdisciplinary Science for Art, Architecture, and Archeology (CISAI3), and his team feel they are on the brink of cracking one of the most enduring mysteries of the world--the recovering of the lost Leonardo da Vinci Masterpiece, "Battle of the Anghiari". This mural was painted at the peak of Da Vinci's art and fame in 1505. Even at the time of Leonardo, this mural was deemed as the greatest art achievement ever reached by an artist. 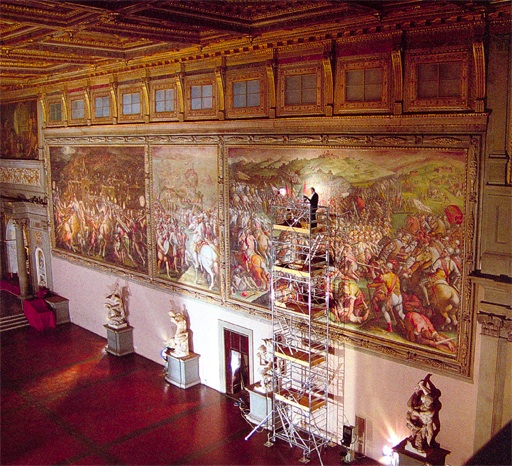 Scaffolding in the Hall of 500

The "Battle of the Anghiari" graced the interior wall of Florence's famed Palazzo Vecchio, in the Hall of Grand Council (known also as the Hall of 500). The mural was to be coupled with another battlefield scene by Michael Angelo on the opposite wall. It would have been the artistic battle of 2 titans of art, but it never happened. Michael Angelo was asked by to Pope to go to Rome, and now Da Vinci's unfinished mural has disappeared from view for the past 500 years.

This fabulous treasure hunt has led Professor Seracini on a 35 year-old quest. Seracini and his team believe that the mural is hidden behind another frescoed wall, trapped in darkness, in its original location of the Hall of 500. "Through the support of Friends of Florence, archival research has shown that Vasari, who was a great admirer of Da Vinci, may have built a brick wall in front of the mural before being commissioned to paint his own fresco on the wall." 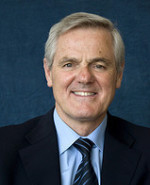 As a matter of fact, at the corner of the Vasari mural, close to the ceiling is an inscription of two words: Cerca Trova, which means Search, You Shall Find. Does this sound like a plot from Dan Brown's The Da Vinci Code? Maybe so. Mauricio Seracini was actually mentioned in Dan Brown's book.

But this is a modern, state-of-the-art treasure hunt, where the latest high technology is deployed to find clues as to the whereabouts of the mural. Seracini's team has used a laser scanner to map out Palazzo Vecchio's three-dimensional blueprints with astonishing detail. This coming September, he will deploy a neutron generator and a gamma ray detector to scan behind the outer of the Hall wall for traces of the pigments unique to the palette used by Da Vinci's on the mural. (It is believed that paints used by Vasari and Da Vinci differed).

This is also a true interdisciplinary research experience where structural engineers and computer scientist collaborate with artists and art historians. Various Foundations and Organizations have supported this research. The Guiness family has sponsored the research from 2000-2003, and now The National Geographic Society has exclusive rights to film a full length documentary on the research and much awaited discovery. The scanning this September is expected to last eight to ten months. When asked how sure he was about his upcoming discovery, he replied, "Thirty Five years of research and data have not shown me otherwise."