Arabic for “stomping the ground,” dabke is the national dance of Lebanon, Jordan, Syria and Palestine. Even the Israelis have developed their own version of this ancient Arab line dance. Now, just as Israel has assimilated dabke into its culture, the Israeli-American choreographer, Zvi Gotheiner is incorporating, and exploring this dance form in his latest work for his New York-based company ZviDance, DABKE.

Gotheiner was inspired to create DABKE while dining in a Lebanese restaurant in Stockholm with his partner. Seemingly out of nowhere, one of the waiters and his partner began to dance dabke in between the tables. The sight of an Israeli and an Arab coming together through dance convinced Gotheiner of the importance of creating his new work. He was further convinced as he watched hundreds of dabke clips on YouTube for research and inspiration. Gotheiner was amazed at the number of views and comments that each clip received. Some comments brought up the controversy of women dancing dabke. (While it is primarily a male dance, some cultures, for example, the Jordanians, have styles that allow women to participate.) Even more interesting was how one Arab culture would criticize another Arab culture and claim ownership to dabke. 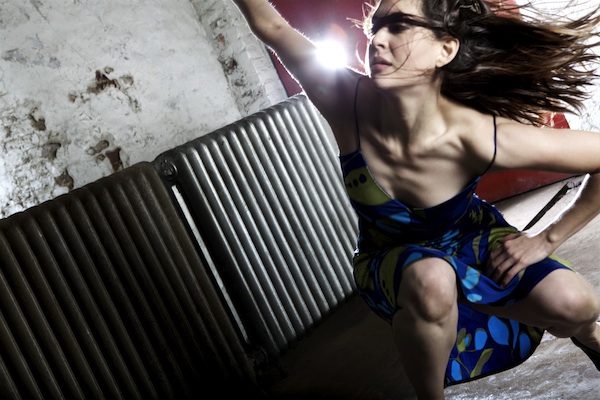 In Arabic cultures dabke is a line-dance performed primarily at weddings and celebratory gatherings. There is usually a leader, called raas ("head") or lawweeh ("waver"), who determines the basic patterns of the group. While the group keeps the rhythm, the leader twirls a handkerchief, rifle, branch, or a masbha (a string of beads) and improvises on the basic phrase. In Israel dabke is considered one of the most beloved social dances. While the Israeli style shows similarities to its Arabic counterpart, it is not authentic Arab dabke.

Born on a kibbutz in Israel, Gotheiner's highly deconstructed take on this social dance highlights the individual personalities one might find in a dabke line. While the choreographer doesn’t necessarily employ clear dabke steps, his work is, nevertheless, full of cultural references. He sees his efforts as a third generation “borrowing.”

ZviDance’s DABKE highlights tribal and national identities while simultaneously attempting to dissolve those definitions. Reflecting on the recent “Arab Spring” movement that ignited the Middle East with unstoppable forces for change, Gotheiner celebrates this trend, acknowledging its ripple effect on all of us. The underlining current of the work is a sense of inevitability.

Save for a few quiet moments, the group sections of DABKE drive forward forcefully as dancers wash across the stage in waves. Gotheiner uses solos and duets to zoom in on specific aspects of his community. Repetitions of phrases highlight a cyclical nature to this dance form, yet as the work progresses we lose direct references to tradition.

Three solos stand out in their potent reference to Middle Eastern culture. Robert M.Valdez reveals the hidden, vulnerable side we don’t often associate with masculinity. His aqueous movements meticulously travel between a soft internal focus and abrupt outbursts. Todd Allen’s solo, the heart of the work, evokes images of protest, call to prayer, resistance and violence. Allen uses his shirt in a myriad of ways, indicating at times a loaded gun, or banner sign, or a masbha. Kuan Hui Chew’s relentless dance reminds us of Sisyphus’ burden to continue rolling his boulder back up the hill to no avail. Her repeated hand gestures, suggesting decapitation, cause her to fall to the ground only to have to get back up again. She searches for something, someone, or some resolution. One can’t help but feel a sense of alienation as the group leaves her to struggle alone on stage.

Throughout time, various social dances have been claimed by cultures, but can they be? The Argentineans were not alone in developing the Tango. Much of Tango’s influence came from European and African cultures. Similarly, Salsa is not solely Cuban: it also has African roots. Many Dutch folk dances have Scottish origins. And so on.

By virtue of being improvisation based, dabke, the social dance, is ever changing. Gotheiner continues to celebrate the deconstruction of the traditional dabke line, and subsequently perpetuates its evolution. One of the implicit goals of his new choreography is to call into question the ownership of social dance. Isn’t social dance an expression of communities and cultures coming together? Who then is the authority?

Whatever the answers may be, ZviDance is successful in creating their own artistic interpretation.