For this week's installment of "Living the American DREAM," we're featuring a DACA recipient in her own words. Mayra Melendez graduated from Maryland's Salisbury University last month with a degree in international studies. On campus, Mayra has been a leader of immigrant student activism. While there, she helped organize the Undocumented Students Forum with the hope of increasing undocumented student resources at the university. Mayra also has the distinction of being selected as a FirstGen Civil Rights Fellow this summer, one of seven. In the fall, she begins a two-year community fellowship with the Immigrant Justice Corps in New York. We wish her the best of luck.

I arrived in the United States at seven years old with my family on an H1B visa application. At age 17, and after 10 years of waiting to hear back from U.S. Citizenship and Immigration Services (USCIS), my family and I found out our permanent residency application had been denied due to the errors of our immigration attorney. She had filed our application wrong. In high school I was quiet about my status and did not feel safe sharing it with anyone. 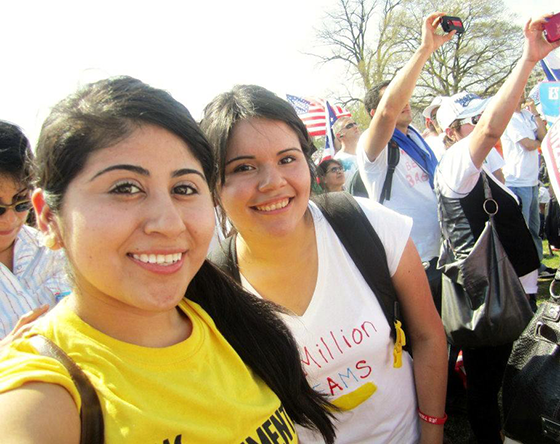 In 2012, I was formally introduced into immigrant advocacy through the Maryland Dream Act campaign. Activism and organizing helped me find my voice and be open about sharing my story. I co-founded Students Taking Action for Necessary Dreams (STAND), a youth immigrant group dedicated to immigrant rights and education access for students. Our group campaigned for the Maryland Dream Act -- we canvassed weekly, spoke at numerous organizations and churches, and conducted trainings for volunteers.

The Maryland Dream Act won in referendum on Election Day 2012, establishing a process for undocumented students who graduated from high school in Maryland and met certain criteria to be able to pay in-state tuition. Around that time, Deferred Action for Childhood Arrivals (DACA) was announced. Before DACA, I would always wonder what I would do after college, and I was constantly in fear of deportation. College sometimes acted as a blanket for those fears because I would feel safe and like everyone else, but I knew I wasn't.

An event that I still remember was when a police officer came to my friend's car window. I remember telling myself, "There's nothing to worry about, Mayra. You haven't done anything." But due to my status, I was terrified. I was sitting in the passenger seat, but I thought, "What if he asks for identification?" At that point, the only ID I had was my school ID. He didn't ask for anything, and after making sure we were okay, he let us go.

DACA means not having to worry about these fears any longer -- at least not for two years. I applied for DACA because I recognized the opportunities it will open up for me. I will no longer have to worry about removal or stress about how I will get a job, and I will finally be able to apply for a driver's license.

However, while these opportunities are still open to me, the rest of my family does not benefit. Even with President Obama's proposed Deferred Action for Parents of Americans and Lawful Permanent Residents (DAPA) plan, my parents do not qualify because neither my brother nor I are permanent residents or citizens.

Every day I remember this, and every day this motivates me to continue to work for my community so my parents one day can live without the fear of deportation and separation.