When Jose Aguiluz was 15, he was involved in a severe car accident in his native Honduras. Desperate for help, his aunt contacted doctors at Johns Hopkins Hospital in Baltimore, Maryland. The staff were able to perform the required surgery, and it wasn't long before Jose and his aunt traveled from Honduras to the United States. His immediate family joined soon after so they could be by his side before and after the procedure.

The surgery came at a great cost, however. Jose's parents had to sell everything they owned to pay for it and to be with him.

That was almost 10 years ago. Yet it was a fateful event for many reasons. During his stay at the prestigious medical facility, Jose discovered his passion for medicine. It also marked the beginning of a new life. 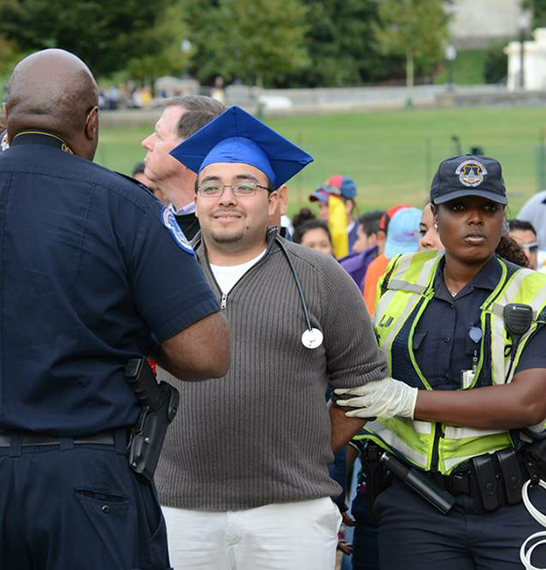 Jose remained in the U.S. -- a decision that was beyond his control -- and in time his visa expired. Despite the hardships brought on by his undocumented status, Jose proved to be a spectacular student. Although his status barred him from receiving financial aid, Jose managed to find jobs to pay his tuition and fees at Montgomery College. His workday started at 5:00 a.m., followed by classes at night.

When the Deferred Action for Childhood Arrivals (DACA) program was established, Jose knew he had an opportunity to finally achieve his potential. He chose to pursue a nursing degree and was dedicated to making this dream come true, no matter what obstacles were in his way.

"Education is the path we have to become someone in our lives," said Jose.

Jose continued to balance work and school once he started his nursing education. Despite a hectic schedule, he became active in his community too. He worked to pass the Maryland DREAM Act by canvassing neighborhoods and encouraging people to get out the vote. This civic experience made the DACA announcement that much more special for Jose.

On the day President Obama introduced DACA, Jose went to NCLR Affiliate CASA de Maryland to talk with fellow youth organizers and share in the victory they had worked so hard to achieve. He filled out his DACA application, anxious to receive his work permit and finally advance toward his dreams. The best part was being able to take his board examinations. Since January 2014, Jose has been employed at Washington Adventist Hospital as a registered nurse.

Jose has already achieved much, but the 23-year-old is just getting started. He continues to contribute to his community as a member of Casa's board of directors. He is also continuing his studies and plans to pursue an advanced degree in public health at the school where it all started: Johns Hopkins University.

Without DACA, Jose knows that getting to this point would have been nearly impossible, and he pleads with Congress and the 26 states that have blocked DACA expansion and the new Deferred Action for Parents of Americans and Lawful Permanent Residents (DAPA) program. "Only by removing these roadblocks can we show everyone what we're capable of," he says.