If Republicans want to understand how well their minority outreach efforts are working, they would do well to look over the vote call for Friday’s symbolic House vote to end the president’s policy of deferring deportation for immigrants brought here illegally as children.

In a vote that highlighted the demographic chasm separating the Republican Party from an increasingly diverse America, virtually all of the 212 House Republicans and four Democrats who voted to kill the Deferred Action for Childhood Arrivals program, or DACA, were white non-Hispanics.

President Barack Obama used his executive authority in June of 2012 to create DACA, which exempts many undocumented immigrants who arrived as children from deportation for a renewable two-year period. Those who benefit from DACA may work legally in the United States. 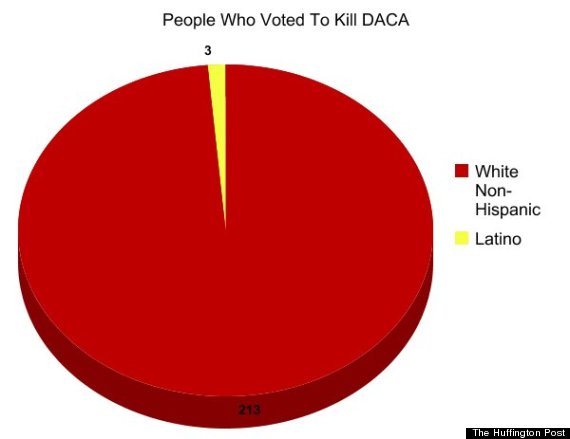 Those opposing DACA were also overwhelmingly male, with the party-line vote again reflecting the GOP’s demographic composition. Women casted only 18 of the 216 votes to end the program that provides deportation relief to some 500,000 undocumented immigrants, often called “Dreamers” after the failed legislation that would have provided many of them with a pathway to citizenship.

No House Republicans are black.

After Republican candidate Mitt Romney won just 27 percent of the Latino vote in the 2012 presidential campaign, the Republican National Committee issued an “autopsy report” recommending that the party “embrace and champion comprehensive immigration reform” or it would run the risk of seeing its appeal “continue to shrink to core constituencies only.”

But Friday’s vote signaled that, at least for now, Republicans aren’t interested in toning down the party’s hard line on immigration.

Republicans have long criticized DACA, viewing it as an overstepping of executive authority and an affront to their enforcement-first approach to immigration policy. The House voted along similar party lines last year to approve an amendment that would have ended DACA.

This year’s unprecedented influx of more than 57,000 unaccompanied minors at the border has prompted Republicans to double down on their opposition to the president’s policy of deferring deportation for law-abiding migrants brought here illegally as children.

Many conservatives have blamed the child migrant crisis on Obama’s DACA policy, despite the fact that little evidence supports the argument.

PHOTO GALLERY
Why Latin Americans Really Come To The U.S.
Voting Made Easy
Register to vote and apply for an absentee ballot today
Register now

Almost Everyone Who Voted To Kill DACA Is White
Why Latin Americans Really Come To The U.S.