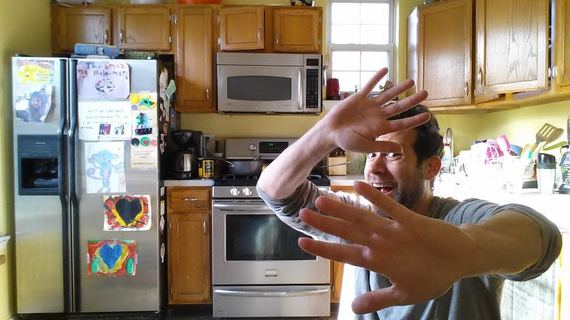 As soon as my wife gets home from work, the kids are on her like beards on hipsters. It's perfect. She missed them, they missed her, and I'm hiding in the kitchen because they are driving me insane.

I'm not sure if I'm supposed to admit that I get sick of my kids. I'm supposed to say that being a stay-at-home dad isn't a job, IT'S A CALLING. And it is, but sometimes I pretend I don't recognize the number.

Maybe I'm a lousy stay-at-home parent. Maybe it's been a rough couple weeks. I know I shouldn't complain. I love my kids, they're fun and awesome and they aren't even home all day with me. Simon is in school until 3:00 and I pick Penny up at 3:45. But three or four hours later and I've generally had enough. To be perfectly honest (why stop now?), if they're fighting and feeling particularly ornery, the car ride home with both of them can be "enough."

Once we get home, it can be a very busy three-plus hours. After everyone's had their afterschool snack, I have to get Penny to do her homework, make Simon leave her alone so she can do her homework and walk the dog. I -- almost always unsuccessfully -- try to get at least one of them to go out with us, because I know what's going to happen when I leave. When I get halfway down the block I'll see Penny at the door, screaming that Simon pooped and needs his butt wiped, even though I asked him if he had to go before I left. Or maybe today Simon will run down the street in his socks and no coat because he misses me, even though he could not have cared less two minutes ago. If I somehow make it back without either of them chasing after me, I brace myself for tears, fighting and incomprehensible explanations. That probably covers the first 20 minutes after pick up, anyway.

Hours later, I've had it. They've beaten me. Ostensibly getting dinner ready, I'm really hiding in the kitchen. By necessity and some inexplicable miracle, I manage to calm things down. More likely, the kids know they've won and take pity on me. (They can be so sweet!) If it's a good day, they're busy playing together on the floor. If it's a bad day, they're zonking out in front of the television. The important thing is that there is relative peace. It can be a hard-fought parental victory that is not without casualties, namely my sanity.

So, yeah, I'm probably holed up in a bunker, nursing my wounds and a beer when my wife blasts through the door. Hopefully, that bunker is starting to smell like roasted garlic and some kind of meat. Hopefully, I'm not quite done yet and I have an excuse to hide in the kitchen a little longer.

"MOMMY!!!!" they shout. I know I should hold them back, let her take off her jacket, change out of her work clothes and breathe a little. But I don't. I breathe my own sigh of relief. "Thank god you're home!" I think. "I'm just finishing up dinner!" I announce. Hopefully, they'll actually eat it.

Voting Made Easy
Register to vote and apply for an absentee ballot today
Register now
More:
KidsParenting Parentsstay-at-home mothersstay at home dads
Newsletter Sign Up
Raise the kind of person you'd like to know
Subscribe to our parenting newsletter.
Successfully Subscribed!
Realness delivered to your inbox