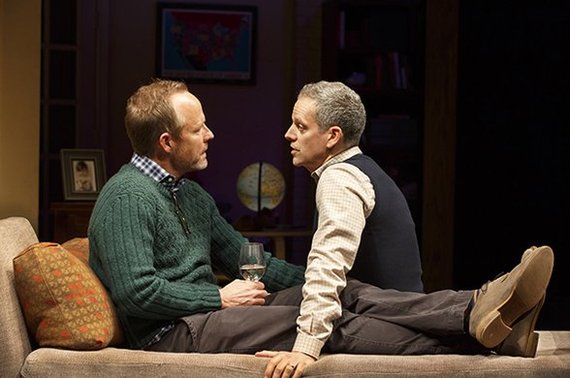 This drama tells the year-long story of an older gay couple, Rob (Patrick Breen) and Alan (John Benjamin Hickey) and their three-year old daughter, Nicola. Throughout the work they deal with infidelity, a decaying sex life, their child's blatant favoritism of one parent, and various career struggles. The two leads take the audience on their emotional roller coaster, showing all the nuances of a same-sex marriage and family.

For that reason, I praise this show, especially the playwright Peter Parnell, since this play does a rather decent job educating the public about gay marriage and parenting. I saw the show on Friday night, December 5th, and the majority of the audience were distinctly older. I'm not entirely sure they knew what they were going to see, actually. Regardless, just by watching this show they learned that gay men have their own marriage struggles, arguments, tender moments; they even struggle to get their daughter to go to sleep, just like straight couples do.

The show playfully uses a straight couple, Serena (the hilarious Kellie Overbey) and Michael (John Pankow), to show how similar the gay parenting experience is to the straight standard. This play proves that gays can do it too, and that inside, they're just like straight parents.

"DADA WOOF PAPA HOT" is a very clear response to the recent Supreme Court passage of gay marriage; it answers the question: now that gays can marry what happens next? This play is trying to give audience a chance to see what happens "next." The characters represent the many gay men who finally got legally married after so many years together then had a child, proving that they can have the quintessential family life. But this play goes past that, it explores a crumbling gay marriage, and includes discussions of gay divorce, arguments over biological parenting, various gay ideas about extramarital sex, and much much more. Rob and Alan help audiences realize that a gay relationship can be just like any other relationship, that parents are parents--and they everyone deals with the same problems, whether they be cheating, unruly children, finances, or a lack of sexual intimacy.

On the other hand, this play feeds into everything that is wrong with gay assimilation, or "homonormativity." Some queer people want to be just like straight people and chose to emphasize the "we're just like you" idea. However, many other queer people disagree with this, want to live a uniquely queer life, and chose to stress their differences, rather than their similarities, to heterosexual people. Not all queer people want to have a traditional wedding, adopt 2.5 children, and spend their days drinking white wine and discussing private kindergartens--which is exactly what Rob and Alan do for the entirety of the play.

Within the more radical parts of gay/queer community, middle/upper-class, white gay men are considered the most privileged type of non-straight people. They still enjoy the benefits of being white and of being male, and by now, a lot of stigma of being gay is gone. Gay men have become much more accepted and visible in media, more so than any other type of LGBTQIA+ people. Thus, wealthy white gay men are also critiqued as being unconcerned with queer politics and instead spend their time trying to act "straight" and have a "straight" life.

This play feeds into every negative stereotype about white gay privilege. All the gay characters are constantly discussing private school admissions, Tibetan nannies, violin recitals, and what the latest "hot" restaurant is, all while wearing tight Ralph Lauren sweaters, lounging in designer chaise lounges, sipping a glass of Reisling, and munching on lobster risotto. The lives of all the gay characters in the show drip with privilege, subtle elitism, and a total removal from gay culture (unless of course, you argue that what was just listed has become gay culture).

For better or for worse, "DADA WOOF PAPA HOT" proves to audiences, that gay couples and gay parents can be just like straight couples and straight parents. Although this idea upsets many in the LGBTQIA+ community, this play does do a great job at educating straight audiences about gay relationships and parenting, providing some much needed coverage about gay experiences.

This struggle between good exposure versus playing into negative stereotypes is perfectly summarized by one of the most poignant lines of the play:

"I just don't feel gay anymore...becoming like everyone else isn't what I want anymore."

"DADA WOOF PAPA HOT" does all it can to respond to a post-gay-marriage-legalization world, eventually concluding that many married and gay parents may soon realize that being "like everyone else" does not mean living "happily ever after."