Picture this: New York City, 1982. In his cantaloupe-colored living room (complete with the mandatory male nude painting on the wall), Donald (Yuval David) -- a handsome, slightly neurotic, and openly gay twenty-something actor -- is furiously rehearsing for a possible callback. It's a part which he hopes will be his big break: a commercial for Friskies cat food! Donald is visited by his headstrong father (Tony Rossi), who seems well-meaning but who just doesn't, shall we say, "get it": Dad doesn't understand why Donald can't simply turn straight, find some nice young girl, and carry on the Moscowitz family name. He also can't see why his son wants to be an actor rather than carry on the family business: "Why do you want to sell cat food when you can be the prince of metal balls?!" Frustrated, our protagonist resorts to telling his dad a lie about having a secret 10-year-old son with "Mary Ellen McGuire," a college girlfriend. Before you can say The Wedding Banquet or The Birdcage, the revelation about this mystery love child is spread to the rest of the family. Donald's mother (Kate Katcher, playing the stereotypical Jewish mama to the hilt) is so excited that she doesn't even mind that the child is "out of wedlock." Donald's grandmother (Mary Ellen Ashley, copying her look from Mama's Family's Thelma Harper-- right on down to the floral house-dress and support hose) also learns the good "news" and is equally verklempt.

So, here comes the so-called "rising action" in Marshall Goldberg's Daddy Issues, the new farcical comedy directed and produced by David Goldyn: Grandma tells Donald that she now has a new "reason to live..." and Granny also decides to double Donald's inheritance now that he has an heir. Can Donald produce both a 10-year-old boy as well as a "baby mama" to go along with his charade? Luckily, the child comes in the form of a wheeler-dealing but charming neighbor, named (Get this...) Johnny Walker, played by Alex Ammerman. Finding a "Mary Elllen" proves to be more difficult, as both Donald's feminist gal pal Henrietta (Elizabeth Klein) and hyper-animated drag artist bestie Levi (Sam Given) vie for the juicy role. Levi wins, only to be swept away at the last minute by the opp to be the opening act at a Joan Rivers show. Somehow, however, we already know that we haven't seen the last of the larger-than-life Levi...

This brings us to Act Two, where the audience is invited to the family get-together where Donald's parents and bubbie meet his "newly discovered" child. With a smart kid playing his son and a dedicated friend playing his baby mama, what could go wrong? Well, a lot. In one plot twist, Grandma Moscowitz reveals that she met a new friend at Bingo who lives in Donald's building... and that her leg warmer-wearing, alcoholic, nearsighted new friend (Megan MacPhee) is on the way over. Astute readers may be able to guess by now who this friend may be. However, as we make our way through the jokes about circumcision and prolapsed bladders, there's another big surprise waiting towards the finale. Clearly not based on a true story, the plot of Daddy Issues requires a serving of what theater people call "suspension of disbelief." Let's just say that the final "revelation" at the end of the play requires an extremely generous helping of that same suspension of disbelief.

In the pivotal role of Johnny Walker, 11-year-old Alex Ammerman ironically stands out as the only cast member who plays it straight and still manages to be funny. Even his wordless acting is priceless. As Henrietta -- Donald's no-nonsense, "Natalie-from-The Facts of Life- lookalike" friend -- Elizabeth Klein should have been the grounding that this comedy needs... but her thankless role, sadly, doesn't allow it. The rest of the energetic cast takes the play WAY over the top, with some moments bordering on absurd. As Levi (and Levi's alter ego "Ophelia Crotch"), Sam Given's colorful costumes and persona -- complete with a Judy Garland song thrown in -- seem to have come from another show altogether. Yet, Given's scenes were also some of the play's best bits.

Set in the 1980's, Daddy Issues is a partial throwback to when the word "gay" actually meant "happy." While there are tepid nods to the virtues of family loyalty, tolerance and being true to your creative calling, there's not one heavy moment in this frothy, whipped gelatin dessert of a show. That said, there are a lot of funny moments in Daddy Issues... enough to make you forget about those nagging questions, like "Why didn't Donald cover up that male nude before his family arrived?" Oy veh...

Daddy Issues runs March 31 - April 24: Thursday through Saturday at 8PM and Sunday at 3PM with an added performance Monday, April 4 at 8PM. No performance on April 10. Davenport Theatre is located at 354 West 45th Street. Tickets are available at 866-811-4111 or at www.DaddyIssuesThePlay.com. 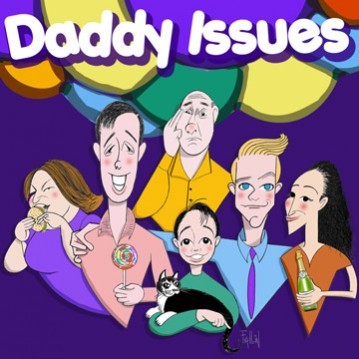 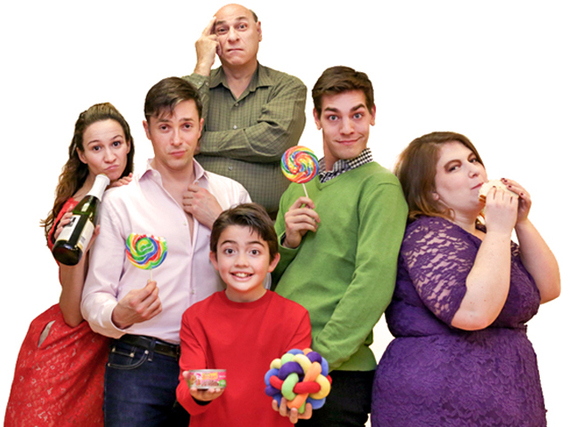