Following the death of beloved dad blogger Oren Miller, many of his friends and fellow members of the dad blogging community have rallied around a cause he strongly supported -- the movement to persuade Amazon to change the name of its U.S. parenting program from "Amazon Mom" to "Amazon Family."

Writing for his site "A Blogger and a Father," Miller often lamented the fact that the kid-centric savings program's name reinforced the stereotype that mothers are the only capable caregivers. The gender-specific name is particularly notable given that the same program is called "Amazon Family" in other countries like Canada, France, Austria, Japan, Germany, and the U.K.

In a July 2013 post, Miller shared a Change.org petition to Jeff Bezos to officially change the name. He wrote:

“Please sign that petition. Please. It’s not about a name and it’s not about me personally being offended and it’s not about stupid emails about yoga classes. It’s about a company that looks at the U.S., then looks at England, and then decides that over there, parent equals mom or dad, while here, well, we’re not ready for that yet.”

Members of the dad blogging community started posting about the issue on social media with the hashtag #AmazonFamilyUS and sharing this graphic from Chris Routly of Daddy Doctrines. 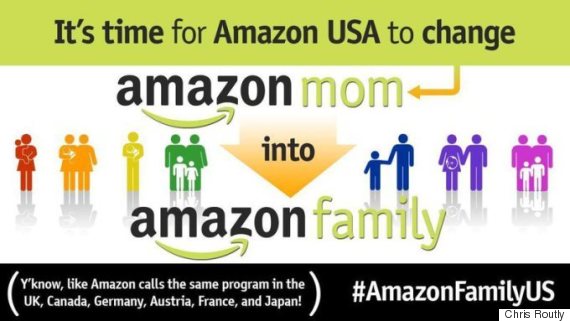 With over 5000 signatures, the Amazon name change petition is about halfway to its goal. To sign the petition and honor Oren Miller's legacy, visit Change.org.

Awesome Dads
More:
Parentsdad bloggersAmazonWhat's Working
Newsletter Sign Up
Raise the kind of person you'd like to know
Subscribe to our parenting newsletter.
Successfully Subscribed!
Realness delivered to your inbox