A few nights ago around 10 p.m., like clockwork, my wife's mouth went agape as she fell asleep while sitting on the sofa.

Her head was swaying back and forth as if she had nodded off on a long, chartered bus trip and not a stationary couch. Instead of trying to throw jelly beans into her mouth, I was darting my eyes back and forth between her and the TV, waiting for the precise moment to turn her show off.

It was her night to pick what we watched and I felt like a deckhand on the Andrea Gail, caught between a perfect storm of Four Weddings (one isn't enough?) and The Bachelorette.

They were rough seas that night, my friend.

As I lightly caressed the "previous" button (this would take me back to Discovery) and tried to time a channel switch in between my wife's snoring (she says she doesn't, but she does), I witnessed a soon-to-be groom asking his girlfriend's dad for her hand in marriage.

I remember the day that I asked my father-in-law for permission to marry his daughter. We sat alone on the back porch of their home in the suburbs of Atlanta with a fire crackling, smoking a cigar and talking about some common ground: our love for the outdoors.

The ladies had gone to bed and I was fully aware of my agenda that night. If I could muster the strength, I would carry my voice over the tree frogs and crickets and ask for his daughter's hand.

This is how I was raised... this is just what you did. It was proper and respectful.

This man raised my soon-to-be (hopefully) wife from a baby and had undoubtedly gone through everything I would eventually experience as a father.

I remember the night very vividly. I could see the energy and love that my father-in-law had invested in his daughter in his eyes... everything that had gone into raising this beautiful woman. He was cautious and reluctant to give her up that easily.

But I'd like to think that he saw the good in me and granted my passage. He certainly had a bond with his daughter that I could never replace. I would love and honor her, hoping only to come close and match the relationship that he shared with her.

All those years he spent as a dad, raising not one, but three girls (and a boy) had to have been, and remains, quite a feat.

It made me think about a "moment" I had a few days before.

I had my laptop set up on the kitchen table and somewhere in between folding laundry and cleaning out the fridge, I was trying to deliver a story to an editor and meet their deadline.

I turned on Brave in the living room, thinking that maybe I could buy myself a few minutes to finish up.

My kids can always sense when I'm doing something important, which means that Charlie (2 years old) is wielding a broomstick like a Bo staff, one foot in the lead, one in the rear -- a fighting stance -- like a Toddler Mutant Ninja Turtle ready to take the offensive with our dog.

And while you would assume that his older sister, Ava (who is 3½) would keep him in line (yeah, right), all I could hear from the other room was something that sounded like a dump truck had smashed into the side of our house and offloaded a half-ton of broken dinner plates onto the floor.

At this particular point, I got frazzled and before I even got into the kitchen to assess the damage, I was already threatening Ava with how many timeouts there would be (because surely, Charlie couldn't be responsible) and laid a guilt trip on her -- telling her that whatever she was doing was making me really sad and hurting my feelings.

And then, I walked into this. 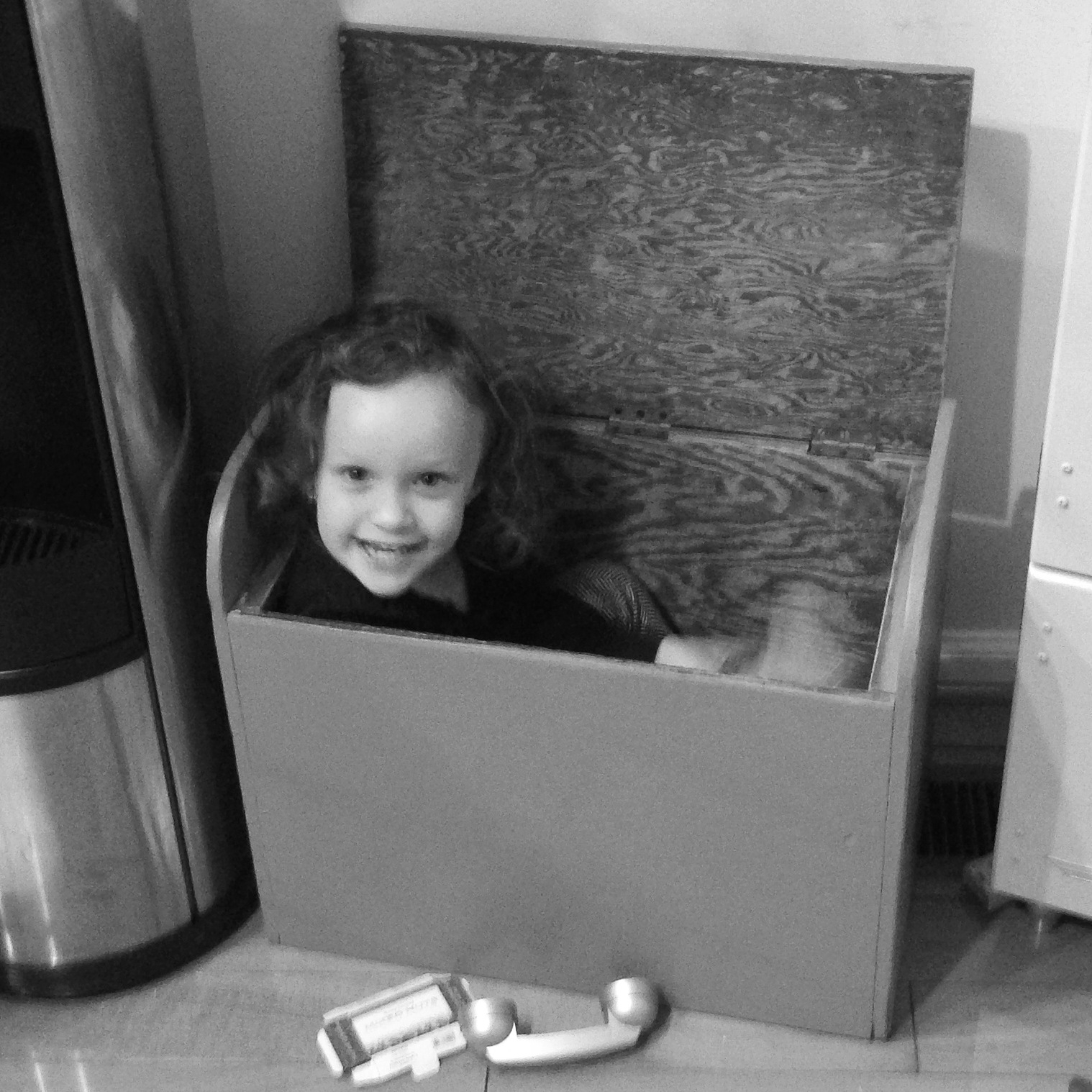 I backpedaled for a minute as my emotions got the best of me, and forgot about why I was mad in the first place.

Why? Because when I looked at her, this is what I saw. 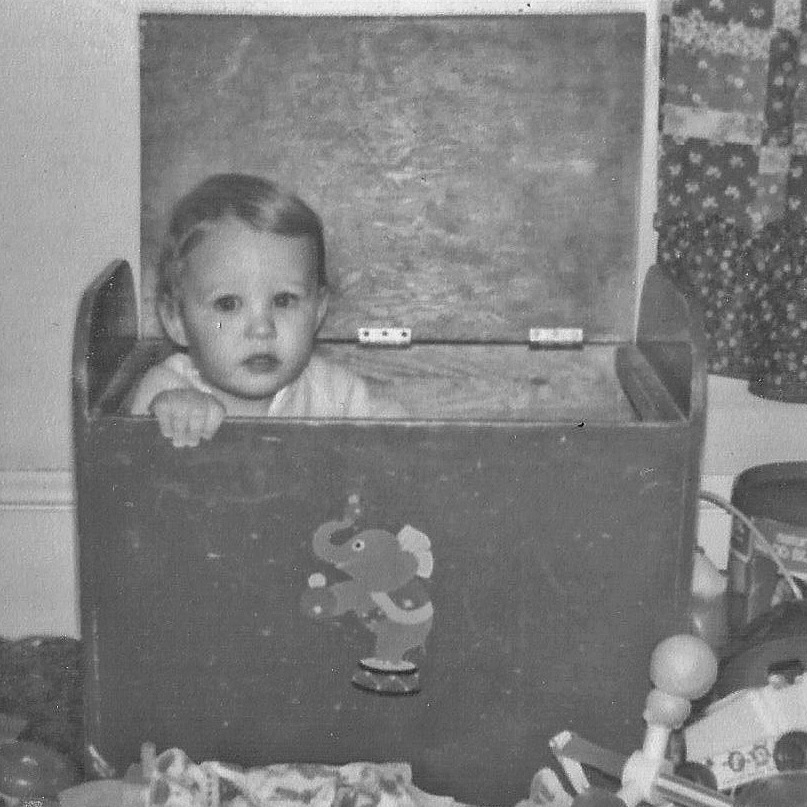 Thirty-four years ago, I sat in this very same toy box as a 3-year-old child.

I thought about how far I'd come and the journey that led me to where I am today.

I sometimes forget that this innocent little girl who tries my patience (often, but certainly not always) is going to eventually grow into a woman. I forget how important it is for her to love her dad.

I should have picked up on this several years ago during that backyard bonding session with my father-in-law in Atlanta.

I'm the one who she's going to compare other guys to as she gets older, just like my wife compared me to her dad when we first met.

As a father, I've really been trying to set a good example over these first few years... to live up to the standards that Ava's grandfather gave my wife.

Being a dad isn't easy, specifically the stay-at-home kind. I am so very conscious about the influence I have on her from day-to-day. I am with her 24/7.

I can never be just one thing.

Even though I want to, I can't always be her best friend and, on occasion, I'm forced to be the villain, enforcing basic rules and structure.

Sometimes, I don't know whether she loves me or hates me.

What I do know is that I have an opportunity.

I have an opportunity to impress upon my daughter the image of what a "good man" might look like -- respectful, honest and caring.

I want my daughter to know that a man is capable of holding the door for her, hugging her when she's upset and maybe even protecting her from the rain.

I want her to know that men are capable of interpreting her feelings and that very little holds more meaning than the love she has to give.

I might get frustrated (often), but I have to recognize the power and influence that I have at this moment.

Beyond all, I hope that Ava appreciates who I was and who I am. I hope that I can set as good an example as my wife's dad did for her.

This moment, this experience, has reminded me that we, as dads, need to be good to our daughters.

This post originally appeared on Adrian's blog "Dad Or Alive". His memoir from Penguin Publishing about the first year of being a stay-at-home dad is available now !

More:
fathers and daughtersparents-toddlersparents-dadsParentsfatherhood
Newsletter Sign Up
Raise the kind of person you'd like to know
Subscribe to our parenting newsletter.
Successfully Subscribed!
Realness delivered to your inbox