The Pentagon is expected to certify the repeal of Don't Ask, Don't Tell today. It is exactly seven months from the date Obama signed the bill into law on December 22, 2010.

Sixty days from the certification, or possibly on Sept. 20, 2011 (it depends on if all parties certify the law today), the full implementation of repeal will be in place. 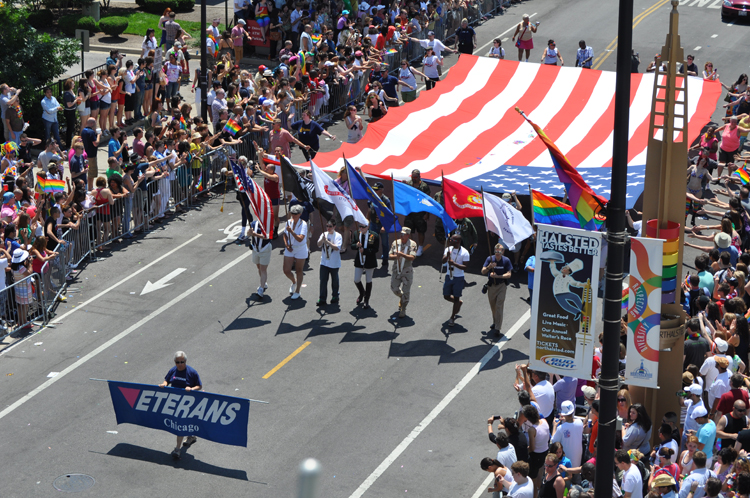 It's been a long time since the first military person was kicked out for being gay. Way prior to DADT, in 1778, Lt. Gotthold Frederick Enslin was discharged from the Continental Army for sodomy. In World War II gays and lesbians were discharged based on psychiatric grounds. In 1982, the gay ban was further reinforced when the Department of Defense stated that being gay was incompatible with military service.

But despite Bill Clinton's plan to eliminate the ban once he was elected president, he came up against fierce opposition from the military and Congress, and he was forced to compromise with Don't Ask, Don't Tell, which proved just as disastrous a policy as previous military gay bans.

Servicemembers Legal Defense Network reports that more than 14,000 servicemembers have been dismissed under DADT since 1993. These represent lost careers, lost contributions to our country's safety and people hurt who wanted nothing more than to serve our nation. [And it should be noted that the lifting of DADT does not help transgender military personnel, which is the next battle to fight.]

Perhaps it is time for a national tribute to these soldiers, those who served during DADT and previous military gay bans. Chicago hosts its 9th annual Salute to LGBT Veterans Tuesday, July 26, noon, at Daley Plaza. While other cities should follow suit with their own events, more important is a national effort to honor those who were sacrificed in the name of bigotry.

On a personal level, I want to pay tribute to my partner, Jean Albright, who served 20 years in the U.S. Air Force. She entered in 1972 under the old gay ban, and retired just before Clinton's compromise of DADT. But in her retirement she did not abandon her troops. She has fought against DADT in the years since leaving her post. She has served on the national board of SLDN, volunteers with Chicago's American Veterans for Equal Rights [AVER] chapter, and has helped to educate thousands of people about the destruction of DADT. 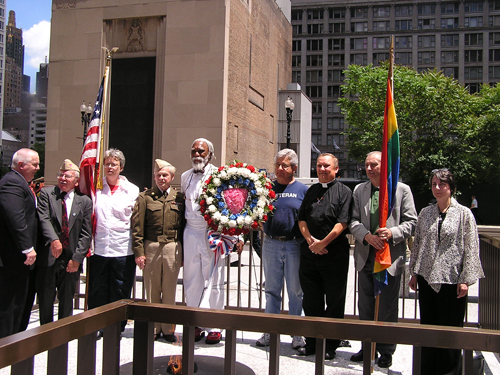 The 2005 City of Chicago tribute to LGBT Veterans. Jean Albright is on the right with other veterans and supporters. Photo by Tracy Baim/Windy City Times

When Jean first got out of the military, she was scared they would pull her back in just to discharge her. She was afraid of what they could still to do her, and her military benefits. Their power reached her in ways I could never understand. As someone who generally is against the military-industrial complex, I learned to love the troops, even if I loathed parts of how our U.S. military operates.

For 17 years I have watched as Jean spoke to groups of five people or 500, quietly telling the story of how she served her country for 20 years, despite her fear of being found out. Her relationships suffered (we did not meet until after she retired), and she lived a double life. The fear was paralyzing at times, and she did not feel safe even coming out to other gay and lesbian servicemembers.

Jean served in the Air Force at several locations, including in Germany and at Great Lakes Naval Base. She would have stayed in longer, but every year she stayed in, she knew she risked it all if they were to find out about her. Often, people closest to retirement were targeted, because if they were kicked out, the military would save on benefits. Some troops were allowed to serve in war time, only to be kicked out when they returned -- if they returned home alive. [This is the subject of my novel The Half Life of Sgt. Jen Hunter.]

Our country has a lot to answer for in how it has treated LGBT troops. It has allowed violence and harassment, discrimination and shameful treatment of honorable men and women. This period in our history may soon be over. But it will not come easy, and the education and training must continue. After all, even though African-Americans and women and more fully integrated into the military of 2011 than they were in past decades, there is still racism and sexism throughout the service.

So we've come a long way, but still have a significant amount of work to be done.

Thank you to my partner Jean for her 20 years of service to the U.S. Air Force. And thank you to the more than 14,000 troops who were the sacrificial lambs of this destructive policy. May you all know that your service was not in vain.

Tracy Baim is publisher of Windy City Times newspaper and author of Obama and the Gays: A Political Marriage.