WASHINGTON (AP) -- The surprising discovery of a fossil of a sharp-toothed beast that lurked in what is now the western U.S. more than 200 million years ago is filling a gap in dinosaur evolution.

The short snout and slanting front teeth of the find - Daemonosaurus chauliodus - had never before been seen in a Triassic era dinosaur, said Hans-Dieter Sues of the Smithsonian's National Museum of Natural History. Sues and colleagues report the discovery in Wednesday's edition of the British journal Proceedings of the Royal Society B.

Sues, curator of vertebrate paleontology at the museum, said the discovery helps fill the evolutionary gap between the dinosaurs that lived in what is now Argentina and Brazil about 230 million years ago and the later theropods like the famous Tyrannosaurus rex.

Features of the skull and neck of Daemonosaurus indicate it was intermediate between the earliest known predatory dinosaurs from South America and more advanced theropods," said Sues. "One such feature is the presence of cavities on some of the neck vertebrae related to the structure of the respiratory system."

Daemonosaurus was discovered at Ghost Ranch, N.M., a well-known fossil site famous for the thousands of fossilized skeletons found there, notably the small dinosaur Coelophysis. Ghost Ranch was more recently the home of artist Georgia O'Keeffe, who was known to visit the archaeological digs under way there, Sues noted.

Having found only the head and neck of sharp-toothed Daemonosaurus, the researchers aren't sure of its exact size but they speculate it would have been near that of a tall dog. Its name is from the Greek words "daimon" meaning evil spirit and "sauros" meaning lizard or reptile. Chauliodus is derived from the Greek word for "buck-toothed" and refers to the species' big slanted front teeth.

"It looks to be a mean character," commented paleontologist Paul Sereno of the University of Chicago, who was not part of the research team. "I can't wait to see if they get any more of the skeleton."

This fits in quite nicely between the dinosaur groups, Sereno said, even though its face is unlike anything that would have been expected in these early dinosaurs, which tended to have more elongated snouts.

This find shows there is still much to be learned about the early evolution of dinosaurs. "The continued exploration of even well-studied regions like the American Southwest will still yield remarkable new fossil finds," Sues said. 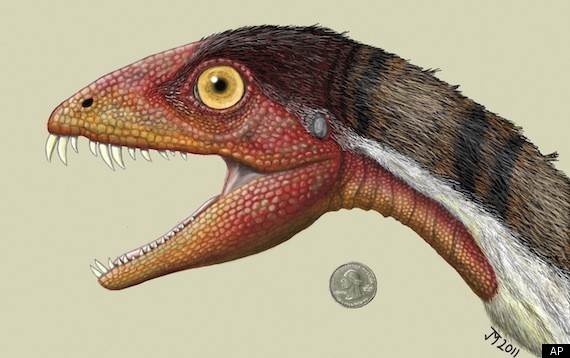