One person's trash turned out to be a national treasure.

Back in 2002, a farmer leaving near East Rudham, Norfolk, in the United Kingdom, dug up a large bronze object that looked like a bent sword.

Not thinking much of it, the unnamed farmer used it as a doorstop for 12 years before deciding to throw it away, according to Dr. Tim Pestell, senior curator of archaeology at Norwich Castle.

"He was prepared to throw it in the skip when a friend told him to take it to be identified,” Pestell told BT.com. "Straight away they knew it was significant."

The farmer's doorstop turned out to be a 27-inch ceremonial dagger that experts believe is about 3,500 years old. Experts dubbed the dagger the Rudham Dirk and say it is of "incredible importance," according to UPI.com. 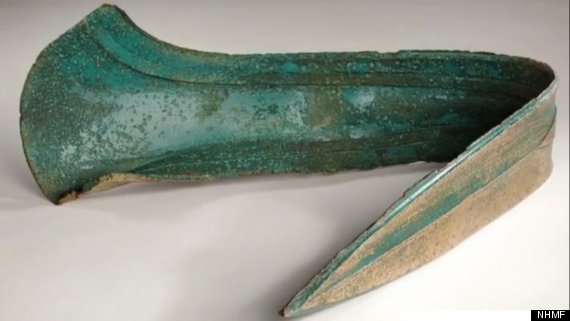 Experts at the National Heritage Memorial Fund said the dagger is about three times the size of a normal dagger and too heavy to be used as a weapon.

Because the blade was never sharpened and there are no rivet holes for a handle, it was most likely used for ceremonial purposes, as an offering to the gods.

"This is almost certainly the reason why it was found bent in half, deliberately folded as part of the object’s ritual ‘destruction’ before its burial, a practice well known from Bronze Age metalwork," according to a National Heritage Memorial Fund.

Only five other daggers like the Rudham Dirk have been found in Europe.

Pestell was adamant about the dagger remaining in the UK, so he has been negotiating with the farmer for nearly a year.

With the help of the National Heritage Memorial Fund, Pestell was able to offer nearly $65,000 for the dagger.

It will be permanently housed at the Norwich Castle Museum, close to where it was found.

That pleases Sophie Cabot, president of the Norfolk and Norwich Archaeological Society.

“We’re really excited -- it would have been a great shame if we’d have lost it,” she said, according to EDP24.

3,500-Year-Old Dagger Found Being Used As A Doorstop
Weird News: Strange, But True