A 25-year-old model with a 42-inch bottom has been crowned Brazil's new Miss Bum Bum.

Dai Macedo, who represented the central state of Goias in the nationwide search for the woman with the most bodacious butt in all of Brazil, was chosen from among 15 finalists by the contest's grand jury in Sao Paolo this week.

"It's a lot of work, a lot of devotion," Macedo told Agence France-Presse by way of an interpreter. "I denied myself a lot of things. No nightclubs. No sweets. I went to the gym Saturdays and Sundays."

The sacrifice is well worth it. Miss Bum Bum winners become instant celebrities in Brazil, and receive a fortune in endorsements.

But the glamor comes with its share of drama. Earlier this year, a columnist for Brazilian newspaper O Dia accused Miss Bum Bum contestants Mari Sousa and Eliana Amaral of bribing judges in attempts to win.

In a note published in October, well in advance of the winners being announced, the newspaper reported that Sousa had secured top honors by paying thousands of dollars to judges. It also claimed Amaral paid $32,000 to judges and would come in second.

Those ethically suspect predictions did not pan out (although Amaral was awarded third place), but even the future bum-bum queen became embroiled in the scandal at the time. Angered by the accusations, Macedo joined other contestants in lashing out against corruption in Miss Bum Bum via social media, according to News.co.au.

Macedo distanced herself from the outburst after winning the competition.

"I'm all emotional. I didn't expect to win,'' Macedo said, according to News.co.au. "All hell broke loose on social media sites but now I can say the contest was real.'' 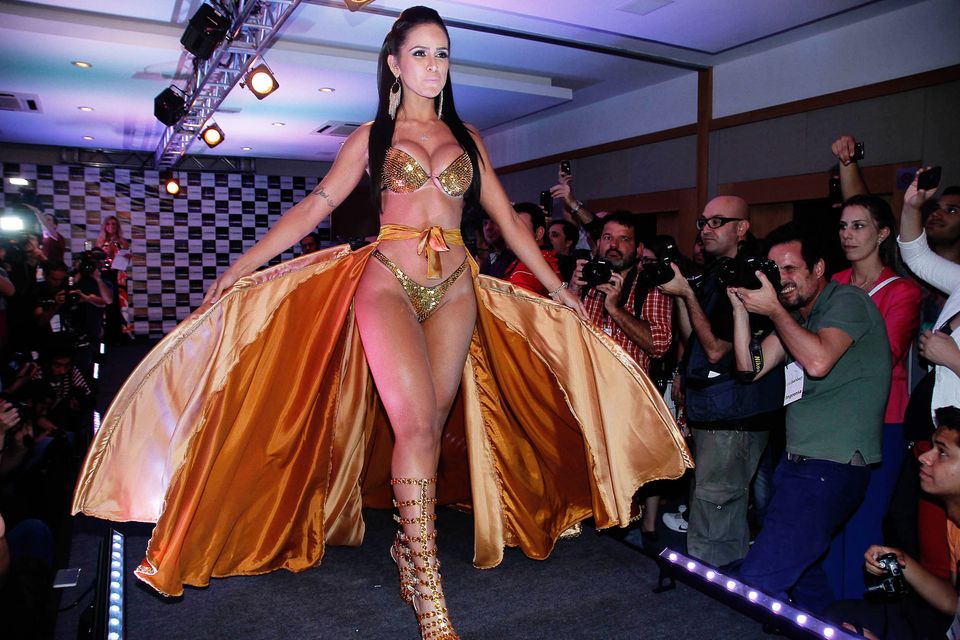 1 / 10
Miss Bum Bum Brazil 2013
Stunning brunette Dai Macedo, with her 42 inches of 'bumbum', officially has the best butt in the land famous for its derrieres after being crowned Miss Butt Brazil 2013 in one of the most controversial and hotly-contested editions of the competition to date. But she admitted that she had had help from liposuction. The 25-year-old, representing the central state of Goias, beat off competition from 14 other finalists at the event in Sao Paulo to walk away with the top prize which is set to include international fame, a GBP1,350 cash prize and advertising contracts worth ten times that. It came after some of the fiercely competitive candidates - including Ms Macedo - had thrown the pageant into disarray by claiming on twitter some of the girls had paid to guarantee a top three result. Eliana Amaral, who came in 2nd, was said to have paid for the result and also to have forged an x-ray to show she did not have a butt implant. Third place this year went to Jessica Amaral. "I'm all emotional - I didn't expect to win,'' said Ms Macedo as she put the pre-event controversy behind her. "All hell broke loose on social media sites but now I can say the contest was real.'' But she admitted she had a bit of help with her butt. "It isn't 100 per cent natural - I had a butt lift. I always had a large backside but liposuction improved it." Pictured: Dai Macedo
Splash News