The battle between DirecTV and Viacom has just claimed a big casualty: Online streaming episodes of "The Daily Show" and "The Colbert Report."

Viacom and DirecTV have been publicly battling over DirecTV's reluctance to pay the fees Viacom demands to carry their 26 channels. On Tuesday evening, the satellite provider dropped Viacom channels, including Comedy Central, Nickelodeon and MTV, from their lineup.

DirecTV has noted to customers that although they are losing Comedy Central on DirecTV, anyone can easily watch popular shows like "The Daily Show" and "The Colbert Report" on the Internet, where videos found on official Comedy Central websites are embeddable so they can be played on other sites (such as The Huffington Post).

But Viacom continued to play hardball. As of Thursday, full episodes of the shows have been removed from the official "Daily Show" and "Colbert Report" websites, although individual clips of the episodes are still available.

The move is likely to upset viewers who do not subscribe to DirecTV, but who will still be unable to watch full episodes of their favorite shows due to the two corporations' feud. Presumably, the suspension will not be permanent, and episodes will resume streaming online when DirecTV and Viacom reach an agreement to reinstate Viacom programming.

Both "The Daily Show" and "The Colbert Report" are on hiatus this week, but their official websites are running ads encouraging fans to call DirecTV to voice support of Viacom shows. 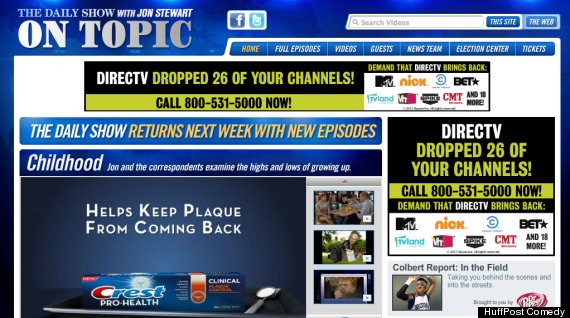 CORRECTION: A previous version of this article indicated that all Viacom channels were dropped from DirecTV this week. Only some were dropped at this time. Language was also added to clarify that the streaming suspension is likely not permanent.