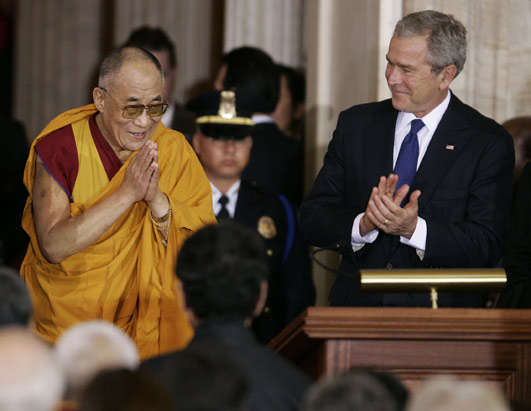 As most sentient beings in North America know by now, The Dalai Lama was on Capitol Hill today. Congress gave him a medal, and he encountered President Bush for the second day in a row. Perhaps it was a good opportunity for His Holiness to explore the Buddhist concept of anatta, or Non-Self.

Anatta says that personal identity - the self - is actually an illusion. Instead, each of us is an aggregation of different factors (biological, historical, karmic, experiential, etc.), intersecting to create the false sense that we exist as distinct beings. The Buddha compared the self to a chariot: Is the "chariotness" in the wheels, the axle, the seat ... or not in any single place at all?

Study of anatta is intended to lead to the kind of ego-less state that doesn't usually go along with a career in politics.

Maybe anatta helps to explain why His Holiness is so conciliatory toward the Chinese, and why he's so accepting of all these American politicians and their foibles. Each of them, according to Buddhism, is behaving as they do because he or she is a point at which multiples forces intersect to create a set of behaviors. Without awareness and training, they are bound to act as these forces dictate.

From the New York Times:

(The Dalai Lama) said that he felt "a sense of regret" over the sharp tensions with China unleashed by his visit and the honors conferred upon him.

In gentle language and conciliatory tones, he congratulated China on its dynamic economic growth, recognized its rising role on the world stage, but he also gently urged it to embrace "transparency, the rule of law and freedom of information."

The Chinese were not appeased by gentleness and conciliation. They called the event a "farce," pulled out of a multi-state conference on Iran, and threatened further diplomatic consequences. That's unfortunate, since the Administration has been hoping they would put diplomatic pressure on Burma - in part to protect the Buddhist monks there. (There's a whole lotta interconnectedness goin' on, once you start looking for it ...)

Advertisement
The White House tried to downplay any symbolism that might be inflammatory, and I think they were probably wise to do so. (Hmm ... is his Buddhist tolerance rubbing off on us?) On the other hand, there was enjoyment to be had in this statement from Press Secretary Dana Perino:

"We in no way want to stir the pot and make China feel that we are poking a stick in their eye."

Martin Scorsese and Richard Gere were with His Holiness today, too. Makes sense. If you really want to understand anatta, there's no better place to start than the movie business. If there is no self, after all, how can your agent ask for a percentage?

We can kid - it's in our nature - but underlying it all is an overwhelming sense of tragedy. And there's a lot to be learned from the way the Dalai Lama handles conflict with the Chinese. He doesn't lower himself or get personal ... but he doesn't surrender, either. That's not bad for somebody who, at least on a metaphysical level, may not really exist.