"Lick my nose!" the Dalai Lama said, placing his nose directly in front of my chihuahua's snout -- just three inches from my face. But Anubis just turned his nose up and looked away.

For years, while wrestling with Zen koans to center my meandering mind, I'd always wondered: if I met a master of Buddhism, how might I be tested? What might I say? How might I act? But I'd never contemplated that my chihuahua might be present. Or that the master might be His Holiness himself -- the Dalai Lama.

Though I wasn't wearing my glasses, I didn't have any difficulty in recognizing the Dalai Lama when a number of monks spilled from the green door onto Harvard Yard. Perhaps it was not my eyes that recognized him, but my heart.

In contrast to the monks before him, the Dalai Lama passed slowly through the ivy threshold. Planting his feet near the small crowd, he scanned the sea of expectant smiles, and waved gently, inviting us to come closer-but the crowd stayed frozen, even the devotees draped in scarves and beads. As I felt my heart swell and leap towards him, I bowed deeply in his direction.

"Greetings and peace to you, Your Holiness! Happiness, peace, and joy to your open heart!" I said. The crowd, suddenly unfrozen at last, all turned in my direction, embarrassed by the spontaneous outburst of a crazy lady holding a chihuahua like a baby. Oh gosh, I thought, what had I done?

Pointing at Anubis in my arms, His Holiness laughed and whispered something to his security guards-who promptly called me over. Nervous that I'd done something wrong, I considered absconding to Harvard Square -- or my office. But since the Dalai Lama himself was waving me over, I shuffled slowly through the disapproving crowd, my head hung in shame.

"His Holiness would like to have a private audience with you over there," his chief handler said, pointing to a spot on the grass about twenty feet away. As we walked side by side, all of my anxiety melted instantly away.

"What is his name?" the Dalai Lama said, settling his sandals in the shade.

With each question, he leaned in excitedly for the answer, and with each reply, he giggled with delight and took a contemplative step back. In this dance of childlike wonder, he seemed to glide above the grass, the hem of his saffron robes fluttering in the wind.

"Six," I said, as the Dalai Lama shook his paw.

While I had always spoiled Anubis with nauseating amounts of love, the Dalai Lama delivered more love in one glance than I had in six years combined. Entranced with the strange little creature before him, it was as if he had never seen a dog before-and, since he was a master of the moment, he never had.

From the moment we met, the Dalai Lama treated me like an old friend. Not just a friend-but an old friend-and there is a difference. As we played with Anubis on the lawn, a number of thoughts appeared like puffs of smoke before me. Touch his robe. Take a picture. Ask for a blessing. But in his presence, these desires to dictate the moment were carried away by the playful spring breeze.

Each time we tossed our heads back and giggled at Anubis' curious and comical nature, I noticed that the sky had never seemed so blue, nor the trees so green. I could see the outline of each leaf, and the wisp of each cloud.

"Lick my nose!" the Dalai Lama said again, scrunching up his nose -- as if egging him on.

"Anubis, come on, lick his nose," I said, nudging him in the Dalai Lama's direction.

This coy game went on for several minutes, until Anubis finally -- but just barely -- acquiesced, and swiftly licked his nose.

For years, I had contemplated how I might encounter a Buddhist master, and yet when that moment came, I realized that I didn't need to do anything at all. There was nothing to do, and nothing to say. I was merely there to serve the moment by being fully present. The Dalai Lama, with his open and attentive heart, guided us all into sharing a blissful moment of togetherness. All markers of my identity slipped away. I wasn't a professor, a woman, or a seeker. I was nothing and no one. Between our three communing hearts, there had been no me, but instead, a powerful and timeless we. 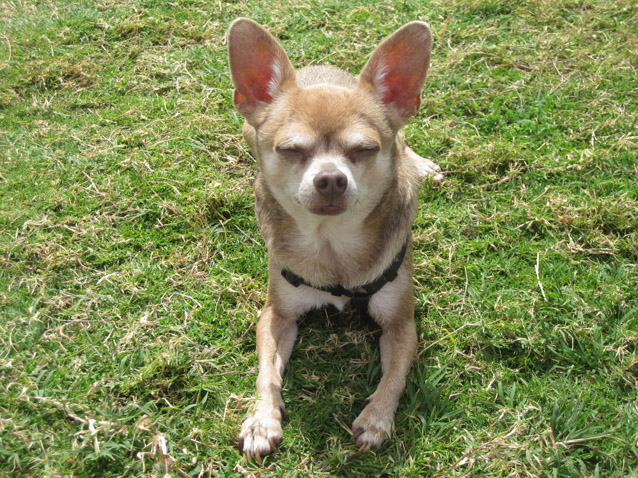 When I felt that the moment, on its own accord, was coming to a close, I bowed and wished him peace, happiness and joy. Turning to walk back towards the stone path, I realized I'd completely forgotten we'd had onlookers. But instead of returning to the crowd, the Dalai Lama walked straight through the gates to the car waiting for him, and sped away.

"Oh my God, the Dalai Lama just like blessed your dog -- that's awesome -- can I pet him?" said an enthused undergrad, as a number of students gathered around Anubis to ask for an indirect blessing.

As Anubis played on the grass near Widener Library, I couldn't help but look at him in a completely different way. Who was this mysterious sentient being, and who, I wondered, might he have been before? After all, the Dalai Lama, the most famous reincarnated being of all, hadn't just been playing with a chihuahua -- to him, he'd been connecting to a soul with many past-and perhaps future-lives.

Later that day, as I began to contemplate the numerous spiritual lessons the Dalai Lama had tendered to my heart, I realized that he'd bestowed upon me a brilliant new mantra. "Lick my nose" is a pretty hard mantra to beat, and it's serving me quite well, as I wander from heart to heart, and from this land to that.