By Hong Soon-do, Beijing correspondent, AsiaToday - Tibet's exiled spiritual leader the Dalai Lama has once again become a political hot potato in the international community. Things are getting complicated as China is reacting strongly against the Buddhist leader's continuous diplomatic moves, including his visit to the European Parliament, Belgium, and France. For instance, China postponed an upcoming China trip by an EU economic delegation. Moreover, China-Tibet conflict is likely to worsen as China is expected to resort to force.

According to the September 18th report of Global Times, a daily newspaper under the People's Daily, China stressed disapproval to the European Parliament and other European countries at Dalai Lama's visit, which began on September 12. However, they did not accept China's request. Only France did not set up meetings between high-ranking officials and the Dalai Lama in response to the fierceness of China's response.

Nevertheless, China is responding fiercely. This is because China is considering the Dalai Lama's visit to the European Parliament and his lecture in Paris as active political event. For now, China had only postponed MEP's China trip. But China could make additional measures. For instance, China could put a brake on economic cooperation with France and other countries. China could also stop high-level political exchanges for a while. 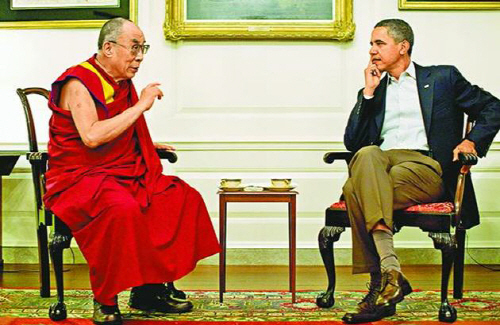 [The Dalai Lama has become a political hot potato in the international community once again. The picture is when he visited U.S. President Barack Obama in June./ Source: search engine Baidu]

But China's such efforts are not doing much. Last June, the Dalai Lama visited the United States and met U.S. President Barack Obama and singer Lady Gaga without getting much pressure. Besides, Taiwan is considering inviting the Dalai Lama to visit the country. Recently, Taiwan Foreign Minister Li Dawei told lawmakers in parliament that if the Dalai Lama decides to come, the ministry will review the matter carefully.

Obviously, this angered China. At a recent regular Beijing press conference, China's Taiwan Affairs Office (TAO) spokesperson Ma Xiaoguang said, "The Dalai Lama wears religious clothes to carry out separatist activities." He warned that Taiwan should prepare for severe impact on relations across the Taiwan Strait if Taiwan approves Dalai Lama's visit. Considering Dalai Lama's moves in France and at the European Parliament as well as his possible visit to Taiwan, it's quite clear that he is still the spiritual leader of Tibet and hot potato in the international community.