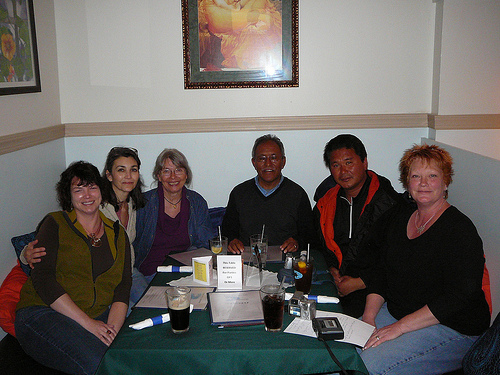 Jigme Norbu, second from right, with his party of supporters and fellow Tibetan walkers during April 2009 stop at Front Royal, Va.'s Lucky Star Lounge. Co-owner of the Lucky Star and Norbu interviewer Shawn Patterson is at far right.

FRONT ROYAL, VA - During an April 2009 interview on an earlier walk to raise awareness about ongoing human rights issues from the Chinese occupation of Tibet , Dalai Lama nephew Jigme K. Norbu warned that America "was feeding a sleeping giant". The reference was to America 's increasing economic ties to China . On Feb. 14th Norbu was struck and killed by a vehicle while walking along the southbound side of State A1A near Palm Coast in northeastern Florida during his most recent Tibetan freedom march.

"We have nothing against the Chinese people. They're human beings just like us. It's the Communist policies we are totally against. And I think the world should know clearly that this has been going on for so long and that Americans should wake up and realize, even though I know America deals with China, that we are feeding that sleeping giant," Norbu said in 2009 of America's growing economic relationship with China. "So many products are made in China, as you can see. So, you are actually making that country a superpower. And I've always said that if my people are suppressed, one day our children, or our children's children will wake up and will be under Chinese rule.

"So it's something that we have an obligation not only to protect our Tibetan people, but the world. I think no country should experience what we went through. So we have this opportunity to meet great people and good people. To come in here and make new friends who give us support and give us the strength to continue on with what we need to do to accomplish our goal. And that goal is to hopefully one day to see our country become independent. That's our determination and that's our goal."

The interview occurred in Front Royal during Norbu's 900-mile "Walk for Peace, Human Rights and Tibetan Independence". The walk began in Indianapolis, Indiana and would end at UN headquarters in New York City.

Norbu's fellow traveler during that 2009 walk, 66-year-old former Tibetan Parliamentarian Wangchuk Dorjee, expressed mixed emotions about potential results from the Dalai Lama's ongoing negotiations with the Chinese for a return of some political, cultural and religious autonomy for his people.

"There are positive signs. You know the last few years his Holiness's envoys have had a dialogue with the Chinese government a few times. That is kind of a positive, I feel that way. But at the same time while the dialogue is there - not very much has become of it. The Tibetans have tried to speak up about their rights and point of view. But when they do that they are put in jail or are killed and all sorts of unbelievable things are done. It is very, very bad."

"But we are a voice here in America where we can speak out and voice our opinions and voice the truth to the public," Norbu added. "If Tibetans in Tibet would do what we are doing today, they'd be executed or imprisoned. They have no such thing as freedom of speech, or freedom of religion, or freedom just to have their own identity and rights - that's all being suppressed. So, as a Tibetan exile it is my responsibility now as a human being to represent my people and let the public know what is going on. - That Communist China can no longer illegally occupy our country."

Norbu said he was well received by average Americans during that 2009 walk.

"Especially out in the rural country where they come out and give me water, food, even money, and the truck drivers along the way as well. So, it has really showed me how kind American people are. And the people out there, they know about Tibet; they clearly know about Tibet. They know about the Dalai Lama. And the ones that weren't sure exactly about Tibet, we'd give them a brief education and told them they can get more on the Internet. They'd say it was great what we're doing. You know this is not just for the Tibetan issue. We are doing it for the universal issue of world peace and human rights."

A future without hope?

By coincidence as I edited our story on Norbu and his 2009 walk, I had just finished a re-read of George Orwell's dark vision of a totalitarian future, "1984". Norbu and Dorjee's observations about Tibet's current plight mixed in my mind with Orwell's dark vision of mankind's future, a future it seems the Tibetan people and others already experience on a daily basis. I suggested to interviewer Shawn Patterson that we end the story with a reference to the lasting warning to humanity Orwell gave us in 1948, perhaps not coincidentally the transposed final two digits of his book's title. Patterson agreed and to close that story on Norbu's efforts to raise public awareness about Tibet we quoted from perhaps "1984's" most frightening passage, as the Party spokesman O'Brien explains the Party's view of the flow of history to Winston as he is tortured into total submission to the state and its symbolic figurehead, Big Brother.

"Always there will be the intoxication of power, constantly increasing and constantly growing subtler. Always at every moment, there will be the thrill of victory, the sensation of trampling on an enemy who is helpless. If you want a picture of the future, imagine a boot stamping on a human face - forever."

Jigme Norbu walked to remove that boot from the face of the Tibetan people - and perhaps to make us all ponder how far our own faces are from the sole of that boot as it is allowed to crush the spirit of others we share this planet with.

On Feb. 14th Norbu's walk ended on the side of a dark, Florida highway - or did it?

A version of this story first appeared on Warren County Report.