Most teens will swear they have been cursed with the most hideously embarrassing parents in the entire universe. While some may be right, their horror stories would likely pale in comparison to the mortification to which one dad subjected his 16-year-old son, not once, but every day of a 180-day Utah school year.

Meet Dale Price, a father of three from American Fork, a city located about 30 miles south of Salt Lake City. Last fall, on the first day of Price's son Rain's sophomore school year, Price and his wife, Rochelle, thought it would be fun to embarrass their son by waving to him as he boarded the bus.

"Later I overheard him talking to her, [saying,] 'Mom, don't let Dad go out there again.' What a challenge." Price told Utah Valley's newspaper, the Daily Herald.

For the next 179 school days, Price waved goodbye to his son. But not only did he wave goodbye, he kicked it up a level by wearing a different costume each morning.

PHOTO GALLERY
Wave At The Bus

Rain's dad emerged from the home as Elvis Presley, Batgirl, the Little Mermaid, Princess Leia, Little Red Riding Hood -- and inmore than 150 other costumes. Sometimes, he would even employ props -- most notably a porcelain toilet he once hauled onto his porch to use as a throne while reading his local paper.

Rain Price said that while he initially found the daily routine "really embarrassing," the humiliation eventually waned, and he got used to his dad's cheeky sense of humor.

"The last couple of months it has turned into more entertainment," he told the Herald.

"Sometimes the driver says 'enjoy the show,'" Rain added. "We all laugh. Everybody else on the bus learned to like it a lot sooner than I did. It wasn't their dad dressing up like a fool."

Dale Price never wore the same costume twice and, amazingly, invested less than $50 into the entire year of get-ups, according to a blog the family created: http://waveatthebus.blogspot.com.

"Most of these costumes were borrowed from neighbors and friends (you'd be surprised what your neighbors have in their closets!), or found in our costume boxes from years past," Rochelle Price wrote on the blog.

While both parents say they are glad their son has a sense of humor and are happy they have given him something to look back on and laugh at later in life, they don't plan on repeating the time-consuming gesture.

"I will sleep like a baby the first day of school," Dale Price told the Herald.

Dale Price Plays Dress-Up: He's A Mermaid, Then A Pirate, Then A Leprechaun -- And His Teen Son's Humiliated
Wave At The Bus 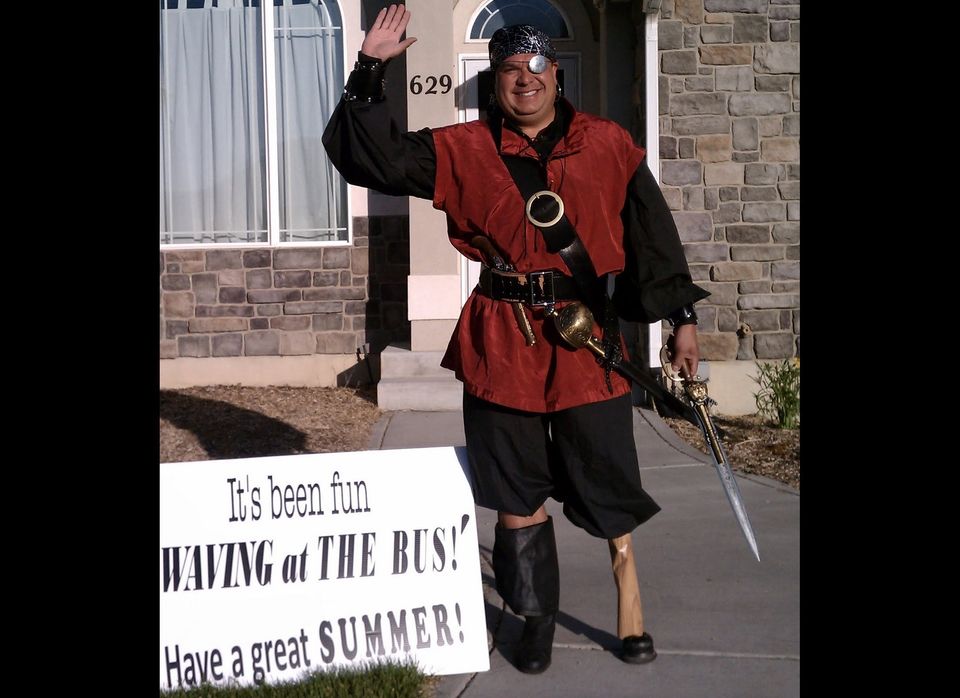