"A people without the knowledge of their past history, origin and culture is like a tree without roots." 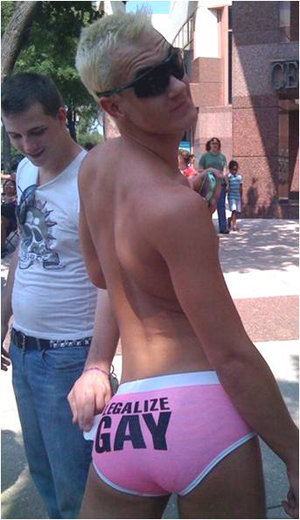 The Alan Ross Texas Freedom Parade and Festival, aka Dallas Pride, is an important LGBT pride event each

year, but outrage over stricter dress code enforcement for participants has reached a fever

culture. As a result, the parade organizers are now backpedaling on harsh statements made by

"I've seen some crazy headlines that are not true," Michael Doughman, executive director of the Tavern Guild, which puts on the parade, told the Dallas Voice. "There is not any issue with underwear. I don't know where this thing about anybody in underwear will be arrested came from, but we've never said that. The police have never said that. The extreme is what we were talking about -- the water-soaked, see-through white underwear with an erection is what we're talking about."

organizers want everyone remove the "queer" from Dallas Pride to make the parade more "family friendly."

Department and DISD to provide security for the parade, said any floats in violation of

indecency standards would be warned in the lineup prior to the parade.

"If there's an [exposed] erection and a child is present that could see it, it is a felony, and we don't want to see that happen," Liebbe told the Dallas Voice. "My goal at all of these events is to have zero enforcement action taken. But there are some people over the years who've tried to push that line to see just how far we could go."

A person commits an offense if, knowing its content and character, he:

Violation of this code is a class-A misdemeanor. However, the offender can be subject to felony

in the third degree if acts were viewed by a minor under the age of 18. If convicted of a felony

charge for engaging in "obscene" behavior in front of a minor, the offender would become a

local businesses. The Fort Worth City Council and the Lewisville City Council both voted unanimously to redefine "nudity" after the "Anything But Clothes" night at Redneck Heaven, a Lewisville bar, required waitresses to wear body paint and nipple pasties instead of bikini tops. These

changes to local ordinances were intended to both reduce displays of local obscenity and protect workers, but the ordinances (and the enforcement of these ordinances) are now being

applied in ways that have further-reaching implications, and LGBT activists have a wide

diversity of views on the subject.

I've never understood the need to get naked (literally, or virtually) during Pride parades. DC's parade this year had one float with a quite well-hung young man sporting some quite loose underwear, or a thong, and jumping up and down so his d*ck would flop 180 degrees up and down for the audience. And while I would have loved the show in the privacy of my home, I found it inappropriate for a public parade, and I have a difficult time understand the connection between our fight for civil rights and that idiot on the float.

Diviesti of GetEQUAL Texas took aim at any attempt to demonize the LGBT community:

stifling of our freedom of expression. Every day, we are forced to self-edit, assimilate,

and hide our identities and expressions simply to survive. Pride celebrations should be a

safe place for us to express ourselves authentically.

Barely-there outfits are nothing new for LGBT pride celebrations. Since the inception of annual pride events,

they were culturally influenced by larger street celebrations like Mardi Gras

in New Orleans and Carnaval in Brazil. Similar to other prominent street celebrations of liberation,

pride events started as protests against oppression. Pride was created to oppose the shaming created to encourage society's social stigma around being LGBT. The events were also statements of opposition to violence by police in the raid of Stonewall Inn, a gay bar in New York City. The Stonewall riots that erupted in response to that raid sparked the beginning of the American LGBT rights movement

and is why LGBT pride parades gained prominance throughout the world. Revered bisexual

original march. Howard also originated the idea of a week-long series of events around the anniversary of the Stonewall raid,

embraced by other Carnaval-type celebrations, which mark an overturning of the oppression of daily

life. These events provide an opportunity to celebrate the beauty of who you have become as a

result of releasing the negativity of America's heteronormative, sin-labeling culture.

community when his presence would have assisted in bridging the divide between the LGBT community and the broader community. Dallas Pride is 25 years strong and has always been family-friendly, and to

suggest anything otherwise is an attempt to deconstruct the event's founding principles.

According to reports in the Dallas Observer, John Wright, the editor of the Dallas Voice, was just terminated following the massive coverage of the Dallas Pride dress code

controversy. The Tavern Guild's Doughman was the person who announced enforcement changes around the dress code, and the Tavern Guild is also a major advertiser in the pages of the Dallas Voice.

In a statement to the Dallas Observer, Wright disputes the idea that he was terminated for any

other reason. Wright says that insubordination was not the reason, calling allegations of

insubordination "just so fucking false it's not even funny. It's ludicrous." The Tavern Guild and

For me, this is an example of the abuse of power by the 1 percent in the LGBT community, who are using their

influence to bend the truth, promote their own agenda and, thanks to the lack of civil protections

for LGB workers, secure the firing of employees who disagree with them at will, with no legal

consequences. It's time for the LGBT community as a whole to address the oppression that

over LGBT workers' rights, like Walmart or Exxon Mobile. We must continue to take action around

racism, sexism, and transphobia so that equality is not just for the top 1 percent of the LGBT

community but for the entire community. And we need to make sure that our votes count in the next

election cycle, so that we can pressure our civil leaders to pass the federal Employment Non-Discrimination Act (ENDA) and begin the steps to ensure full

rainbow-colored history and getting equal!