GAZA, Nov 19 (Reuters) - Even as neighbours picked through the rubble of their destroyed house for survivors, the stunned Dalu family arrived at Gaza's main hospital on Monday to collect the bodies of nine relatives for burial.

"Is this your wife?" asked a medic inside the morgue.

"Ahh, what happened to your face sweetheart?" her husband said, weeping and collapsing into the arms of his spouse. The woman's face was burnt beyond recognition.

Israel's bombing of the Dalu house in Gaza on Sunday was the deadliest single attack since it began an offensive it said was aimed at deterring Hamas and other militant groups from firing rockets over the border at its towns and villages.

Nine members of the Dalu family, a mother and her four children, a grandmother, great grandmother and two aunts died in the Gaza strike. Two other neighbours were also killed as the building collapsed.

The father of the family was at the local grocery with his young son when the house was attacked. He returned to the wreckage to find most of his loved ones dead and trapped in its battered shell.

The Israeli military said on Monday it could not yet provide an explanation about the incident and that an investigation was under way.

The bodies of 12 people killed in Israeli air strikes since Sunday crowded the morgue in Shifa Hospital, while outside dozens of relatives and friends tearfully awaited a final glance on their dead before walking them to the grave.

There have also been scenes of grief in Israel, where a rocket fired from Gaza tore into an apartment building in the southern city of Ashkelon, killing two men, aged 29 and 27 and a 24-year-old woman. Police said 1,100 rockets have been launched at Israel since the offensive began on Wednesday.

In Gaza, mourners also worried about the fate of Yara, a high-school girl, and Mohammed, 25, whose bodies could be trapped under the Dalu house rubble as rescue operations continued frantically into a second day.

"They killed a family that was safe and happy," said Hatem Dalu, 40, a relative and a grocery owner.

"For no reason, Israel has committed a massacre, an ugly crime. All those victims were either children or women," he said, crouching on a hospital staircase.

Despite ongoing violence and the sounds of explosions, several thousand mourners marched in their funeral as the bodies, draped in Palestinian flags, were held on stretchers while family carried the dead children in their arms.

"Resistance created a new formula. If Gaza is hit the resistance will hit Tel Aviv and beyond Tel Aviv," said Hamas spokesman Sami Abu Zuhri at the funeral.

Due to a lack of space in the Martyr's Cemetery, the nine bodies were crowded together into three graves.

Mourners around the stricken patriarch said Israel was trying to increase the number of civilians deaths in order to mount pressure on militant leaders to agree to their terms for a truce being discussed by Israeli and regional representatives in Cairo. 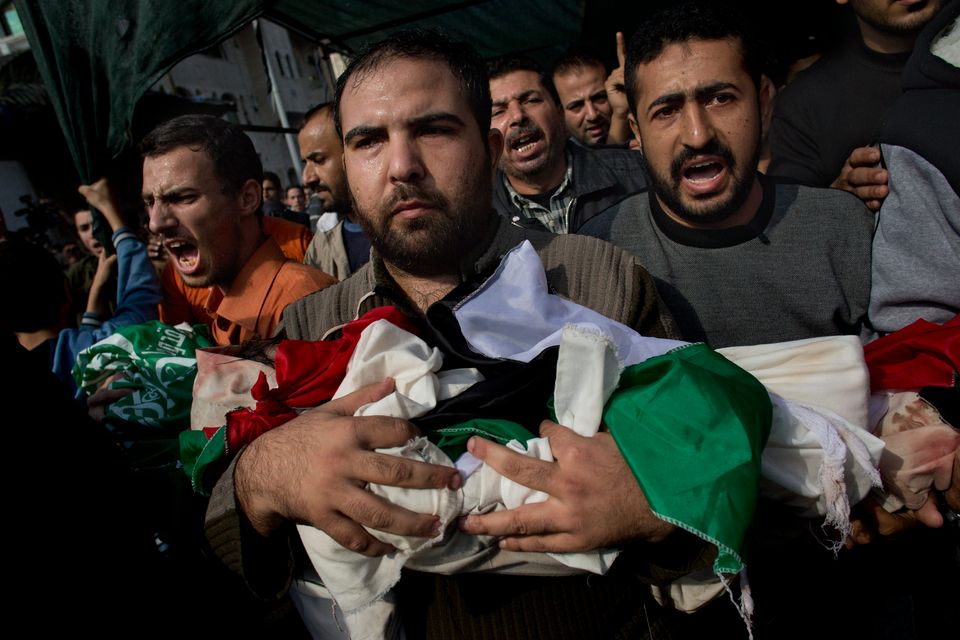