On Wednesday night at the New York Public Library in Midtown Manhattan, Henry Rollins and Damien Echols had a 90-minute conversation about life in hell.

Rollins, the punk rocker turned actor and spoken-word artist, had spent 10 years working for the release of Echols, who, together with Jessie Misskelley Jr. and Jason Baldwin, were convicted as teenagers and spent 18 years on Death Row for a triple murder they swear they didn't commit. The three men, now in their mid- to late-30s, were released in August 2011 after accepting a complicated deal from prosecutors that, as Echols put it, amounts to "basically saying you're accepting this guilty plea but still maintaining your innocence."

Many of Rollins' questions were variations on this one: "How does one go from Planet Earth to Death Row and keep breathing?" 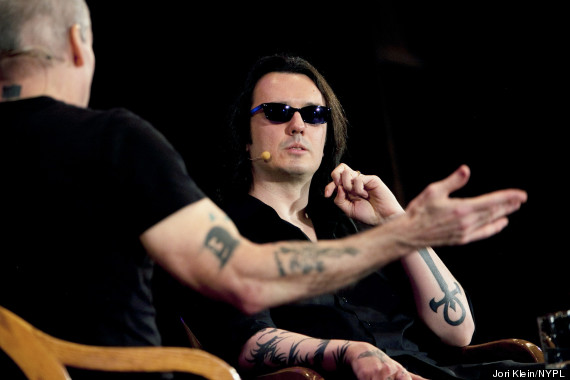 Echols, who recently published a book called "Life After Death," did his best to describe an experience that felt incomprehensible to those in the audience. "It's the most cold, soulless environment you can imagine," he said, one where the guards' idea of an initiation was to "beat the hell out of me for 18 straight days. You realize when something like that happens, you're not living in the world anymore."

Echols said it was three years before he moved past a "fight or flight response," and even then "the horror and the atrocities keep building." Eventually, one adjusts to the solitude, the hopelessness, the lousy food, but "as soon as you get used to that, then they start executing people."

Echols said the miserable conditions on Death Row are perpetuated by public misconceptions about who winds up there. "We're given this impression that prison -- especially Death Row -- is full of these criminal-genius Hannibal Lecter types, and it's not true. You have people there who are stark raving insane," he said, adding that the average IQ of Death Row inmates is 88.

During nearly two decades in prison, "I never saw one single shred of any sort of rehabilitation program," said Echols, who argued that reforming prisoners would serve the public interest far better than merely punishing them. "Almost everyone who goes to prison is gonna get out some day," he pointed out. "They're gonna be in your churches, in your schools, in your workplaces -- so it's probably not a good idea to drive them insane."

Echols, who may be one of the brightest people ever to land on Death Row, worked hard to preserve his own sanity. The first realization he had was that he had to "move beyond hope and hopelessness." He had to overcome the despair that caused him to attempt suicide even before his case went to trial, but fantasizing about release wasn't necessarily healthy either. "If you live in this constant state of hope, you're wasting your days," he said. "You're wasting the time you have alive."

With so much time alone -- he spent 10 full years in solitary confinement -- Echols developed a rich mental and spiritual life. He described meditating for six and seven hours a day, and reading from dawn to dusk for weeks on end. Most of all, he wrote. He would summon even the smallest memories from his life before prison -- one that, owing to his family's extreme poverty, was hellish in its own ways -- and write about them again and again, from every angle he could imagine. "It was all I had," he said. "It was almost like taking out your most valuable possessions and turning them over and over again."

The filmmakers Joe Berlinger and Bruce Sinofsky made a series of documentaries for HBO about Echols, Misskelley and Baldwin, who became known as the West Memphis Three. Those films helped popularize their cause, which was embraced by Rollins, Johnny Depp, Eddie Vedder and other prominent figures. (A new documentary, titled "West of Memphis," opens on Christmas Day.) Echols said the celebrity attention was empowering in every circumstance but one: when prosecutors offered him a deal that involved pleading guilty (while maintaining his innocence). "My first honest reaction was, 'Tell them I'll do any fucking thing they want me to, just as long as I go home,'" he recalled. "But you start thinking, What's Henry gonna think? What's Eddie Vedder gonna think? What's Johnny Depp gonna think?" He also said the guards resented the attention, and made him suffer for it. "They feel like I'm bringing attention not to my case but to the prison, and they don't like that at all, so there was a lot of retaliation and retribution for that."

Echols, whose legal team has unearthed evidence implicating the step-father of one of the three murdered boys, is still holding out hope that he and the rest of the West Memphis Three will eventually be exonerated in earnest. "As years go by and people start to forget who I am more and more, it's hard to make a living when you have a criminal record that shows three counts of murder."

Throughout most of the conversation, Echols maintained an air of almost supernatural calm -- the product, one assumed, of all those hours and hours of meditation. But he laughed good-naturedly when Rollins teased him about his all-black attire ("I guess this is your look: rave promoter, semi-legit manager") and his wife, Lorri, who helped coordinate the campaign to free him ("You won't take this the wrong way: I've been seeing your wife for a long time"). Rollins also got a big laugh when he recalled urging Lorri to "Please never let him go south of D.C. Maybe leave the lower half [of the country] alone." (Echols and his wife moved to Salem, Mass, in September.)

Asked by the library's director of public programs, Paul Holdengräber, to describe himself in seven words, Echols chose "Writer, artist, Zen Buddhist, Death Row survivor." It's a badge of courage no sane person would willingly choose for himself, and yet he's capable of glimpsing a silver lining. "The No. 1 thing that makes us grow as human beings is pain. As much as I don't like what I've been through," he said, "I do see what it has done for me."

Correction: In an earlier version of this article, we listed the Echols as living in New York City; they now live in Salem, Massachusetts. We regret the error.