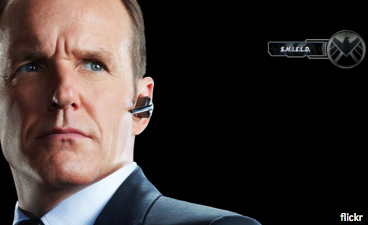 Being a nerd is about knowing. It's about getting sly references, it's about recognizing characters from their voices or their weapons before they step fully into frame. It's about arguing over plot holes, moral codes, and superhero powers.

This week on the premiere of Agents of S.H.I.E.L.D. Marvel allowed everyone to play the nerd for the night, and not just the nerd elite. Marvel allowed us all to flex our developing nerd muscles. And for one hour, damn it felt good to be a nerd.

On the premiere of S.H.I.E.L.D., leader Joss Whedon and crew skipped the exposition and instead relied on viewers' previous knowledge of the Marvel Cinematic Universe and other nerdy content. Instead of a boring lecture on the Marvel world, the show instead just rushed into it. The result? It felt like a bunch of inside jokes that we were all in on.

The show was loaded with fun references and puzzles for the most casual and the nerdiest of Marvel fans to solve. S.H.I.E.L.D. name dropped Nick Fury, Project Pegasus, Romanoff, The Battle of New York, Extremis, Chitauri, but did not explain more. It showed the six Avengers but never blatantly -- instead showing them as toys, shots of their weapons, or on background video screens. It featured references to Iron Man and Stark Industries without hitting viewers over the head with it.

Viewers found themselves naming the superheroes as they saw their weapons, identifying Chitauri and Extremis tech, and pointing at the screen whispering to their friends, "see the Stark Industries logo on the bus." The show even gave new fans a few nerdy opportunities to "get it" through other nerd references with the classic Spiderman "With great power comes ..." quote, saying the scientific name of truth serum before the generic name, and Agent Coulson's Back to the Future car.

The end result: the episode made us feel part of a nerdy universe. We felt the S.H.I.E.L.D. world was our domain. And we felt good about that.

In a recent survey, I found that 97 percent of people who have seen an Iron Man movie could recognize Tony Stark as Iron Man's identity in a multiple choice question. The survey was part of a larger experiment on how knowledge about content affects enjoyment of the content. The point is that even casual Marvel viewers have developed enough inside knowledge and terminology to change how they relate to and experience Marvel content.

A wealth of research shows people use inferences about their own knowledge and behavior to decide what they like and what they should watch and buy. The S.H.I.E.L.D. premiere made it abundantly clear to viewers that this is something they know a lot about and like.

Joss Whedon gave us the opportunity to celebrate our nerdiness. He could have delved deep into the lore and introduced obscure comic book characters, but he didn't. Instead he let us enjoy our current superhero knowledge. That knowledge will develop at different levels for different fans as the show continues, but most importantly the premiere was a celebration of what we already know.

In general, this is what's so fun and powerful about the Marvel Cinematic Universe. As we consume more and more of it, we don't get bored of it. Instead we develop a knowledge set and a little bit of a nerd identity that makes watching any new movie, TV show, trailer, or short more and more enjoyable. Even re-watching the movies has become more fun for people like myself, who over the last decade have become knowledgeable of the Marvel Universe from shows, discussions, or even Wikipedia articles, so re-watching the movies allows myself and others to notice more of the Marvel mythology.

Marvel does a great job balancing the needs and wants of both new fans and old comic book fans. For instance, the advertising for Thor: The Dark World's has largely focused on the two blockbuster characters Thor and Loki. The advertising has not prominently feature Malekith the Accursed, the true big baddie in the film. Yet, the advertising has enough of this obscure character played by former Doctor Who actor Christopher Eccleston, for true nerds everywhere to get excited about.

However, nothing shows Marvel's attempt to let us enjoy our "nerdiness" than how Loki was presented in the Thor: The Dark World teaser trailer. In potentially the greatest way any character has ever been introduced in a trailer, Loki's iconic voice utters over a black screen, "You must be truly desperate to come to me for help." Nerds everywhere immediately welled up with excitement. They realized who was talking and it filled them with anticipation. And on top of that they felt so excited to recognize Loki before being shown him. They got the opportunity to shout with excitement in their mind or to whisper to their friend "Loki!" before the trailer showed his face.

Marvel knows that being a nerd isn't just about watching, it's about participating. Even if you don't dress up like a superhero and go to Comic Con, Marvel has given you many ways to participate in their universe and feel at least faintly nerdy. And come on, admit it, it feels kind of good to be a nerd.

Troy Campbell is a consumer psychology researcher at Duke University. He also loves being a connoisseur of nerd content. By some great fortune he is now living the dream, working to scientifically understand why people enjoy movies and other content. His goal in research is to help people enjoy their content more and help businesses and artists create content people will love more. Check out his blogger page here for more articles on science and nerd commentary