Today's global migration shift is not a new story in the Mediterranean. The controversy over unconditional birthrights dates back thousands of years. Likewise, the recent tragedies in the Roman-era ruins of Palmyra, Syria are a reminder that we cannot separate human suffering and historicide; the destruction of the on-going story of humanity--not just the past--in our daily lives. Developed from an international theatre arts project in Italy, Damnatio Memoriae: A Play, Una Commedia, brings Ancient Rome back to center stage, alongside its forgotten emperors and their legacies of African and Middle Eastern migration, citizenship and history, and asks modern theatre to confront the loss of memory and today's unfolding stories on the Mediterranean. 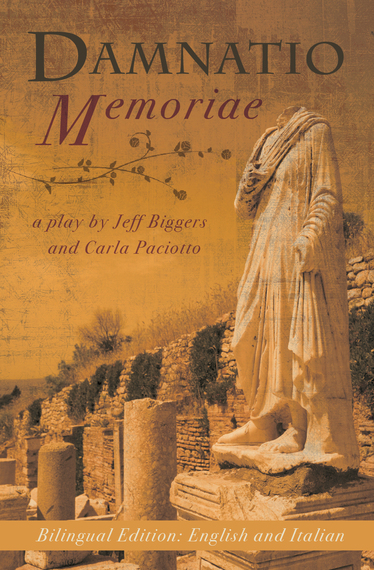 An excerpt from the Introduction of Damnatio Memoriae: A Play, Una Commedia, published by Wings Press:

I stood under the Arch of Septimio Severus in the Roman Forum for the first time as an American expatriate in 1989. Twenty-six years later, I see it as an international stage.

The stage of Ancient Rome. In the time of a migration crisis. Two clashing theatre troupes--one Italian, one composed of immigrants. Two interpretations of Shakespeare's role of "Aaron the Moor" in Titus Andronicus. Two views over the lost history of today's "moors," and the influence of Africans and Arabs in shaping Ancient Rome. Amid the clash of cultures, a new play emerges beneath that Arch; a journey of migration in modern Italy and the Mediterranean Sea that unites cultures from around the world on the stage.

An early version of this theatrical vision first took form in 1989, when my wife Carla Paciotto and I huddled in a small cottage in the Apennines hills, not far from Bologna. We set out to write a multilingual play about new immigrants; the African street vendors, the always nameless, stateless and disparaged "vu compra."

We wondered: How could the stage provide a safe, healing and creative space, as well as a historical and narrative context, for immigrant stories to be voiced and heard.

Those were intense days in Italy. After South African refugee Jerry Essan Masslo was murdered that summer by local thugs in the tomato fields of southern Italy, thousands of Italians took to the streets in Rome to advocate for civil rights for immigrants. Italy had shifted from being a country of emigration to a country of immigration; but the nation's grasp of tolerance and diversity was still in progress.

Twenty-five years later, retracing those steps in Rome, I realized today's immigrants continue to walk along the ancient road of Via Appia, where a mysterious Septizodium monument constructed by Libyan-born Emperor Septimius Severus in Ancient Rome once welcomed their arrival from Africa. Ex Africa semper aliquid novi: From Africa always something new.

The Septizodium is gone, of course, long since dismantled into pieces and distributed into the far corners of the Eternal City like uncollected stories from Ancient Rome. The Arch of Severus has endured.

In his Nobel lecture in 1990, Mexican author Octavio Paz invoked the "presence" of the past in his own ancient world. "The temples and gods of pre-Columbian Mexico are a pile of ruins, but the spirit that breathed life into that world has not disappeared; it speaks to us in the hermetic language of myth, legend, forms of social coexistence, popular art, customs." For Paz, being a Mexican writer meant "listening to the voice of that present, that presence."

The presence of the Ancient Roman past can be powerful, even threatening. Libyan dictator Muammar Gaddafi dramatically removed an antique bronze statue of Severus in the 1990s, when the Emperor's presence served as a mustering ground for the opposition in Tripoli's Green Square (today's Martyr Square).

Gaddafi wasn't the first person to condemn histories, especially those in the time of Severus, whose family dynasty--and the Syrian family of his Empress Julia Domna--ruled the Roman Empire from 193-235, during an extraordinary period of expansion.

The Ancient Romans called it "damnatio memoriae," the act of damning (and removing) someone's memory or existence from all monuments, when found objectionable by the emperor.

This included Geta, the son of Severus, who would eventually be brutally murdered by his jealous brother's accomplices in a power struggle.

Geta's name had been chiseled out of the Arch of Severus. His face disappeared from a famed painted wooden tondo, dated 199, of the Severus family.

What if Geta returned to the stage, censored stones in hand, and demanded to be re-inserted back into our historical memory? What unknown stories would we learn about his family's tragic dynasty and their impact on Ancient Rome, shaped by a Libyan-born father and a Syrian-born mother?

The theatre is the perfect forum for such a "timebend," as Arthur Miller invoked in his own memoir, where the past and present speak to each other in the language of memory.

Nearly two thousand years later, such a legacy has been overshadowed by an unprecedented crisis over immigration in Italy. By the spring of 2015, over 218,000 refugees and immigrants, mainly from Africa and Syria, embarked from

Severus' Libyan ports to make the dangerous voyage across the sea, the "mare nostrum" of Ancient Rome. With more than 3,500 deaths in 2014-2015, the International Organization for Migration hailed the passage as the deadliest migrant crossing in the world.

The ancient tradition of migration knows no borders, of course--nor do such tragedies only unfold in the Mediterranean.

One in seven people on this planet has migrated from his or her homeland; and thousands die annually, making the journey from Central America and Mexico to the United States, from Indonesia to Australia, and across the Sahara Desert to North Africa.

After a tragic boat accident off the Sicilian island of Lampedusa, which resulted in 366 deaths in 2013, "Mare Nostrum" became the official name of Italy's maritime policy of assisting refugees-- which ended in 2014, despite worldwide concern. They are hailed as "clandestines," a word that didn't exist in Severus' time.

Returning to Bologna in 2013, Carla and I approached theatre director Guido Ferrarini, who founded Teatroaperto in 1974 in the tradition of the "Nuovo Teatro Popolare" movement, and shared our sense of urgency to pull back the curtain on the immigrant experience, often lost in the endless political debates, and provide a stage for immigrant voices from Ancient Rome to modern Italy.

"In the theatre," Ferrarini told me, "we can touch on one of the most important, compelling and unavoidable issues of our times: the integration of peoples. This process is inescapable, and our role is to reintroduce in the theater the challenges of immigration, or better, the migration of people on earth."

Damnatio Memoriae emerged as our struggle to recover the past, and its presence in modern times.

We opened the curtains with Shakespeare and his portrait of "Aaron the Moor," in his outrageously bloody play about Ancient Rome, Titus Andronicus. We brought to stage the historical challenge of Severus, who died in present-day York, England, on a campaign to extend the Roman Empire to the far reaches of Scotland; and whose son, the eventual Emperor Caracalla, enacted the historic Antonine Constitution, which granted citizenship to all free men in the Roman Empire.

From the clash of two theatre troupes, a new play came into view, weaving together the stories of the actors and their ancient and modern conflicts over birthright, citizenship, family conflict, fatherhood and motherhood, revenge, redemption--and even love.

To wonder again if these words could ever be uttered on the Ancient Roman stage: Fecisti patriam diversus sis de gentibus unam. "From differing peoples you have made one native land."