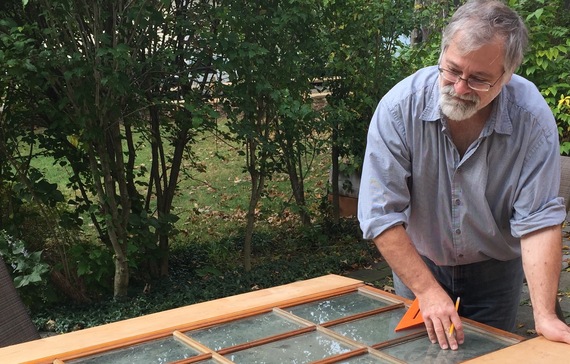 The vegetable garden is riotous: the Sunflower has grown impious with age and now leans inappropriately into the midst of the tomatoes, the Black Eyed Susans are running rampant, the herbs are all shot. My sons, ages eight and five, loopy from their Saturday morning soccer games, are enjoying their precious ninety minutes of computer screen time in the kitchen. My wife Gilda is in the library composing. Although the air is crisp, the October sun is still warm when you're in it. I'm in my workshop throwing together a cold-frame for the garden from an old window and scraps of plywood.

Like the historic Victorian in which we live, the workshop is home to many ghosts, all of whom seem to have grown accustomed to us to the extent that they don't seem to mind us being around. We've brought our own with us, of course, and they're around, too, echoes of what happened here before us.

I only listen to the radio when I work with my hands. A small silver Sony boombox sits on the workbench, sawdust lodged in every crease. I'm not surprised when WMHT announces that the second Daphnis et Chloé suite of Maurice Ravel is up next. Although I haven't heard the piece in years, I know it as well as I know my childrens' faces. Music, as Anne Sexton observed, swims back to us. Pop songs on the radio inspire an array of associations for me, sure; but serious concert music invariably triggers deeper ones. That's why I compose it. Great compositions, like great people, fade from memory, but never really die away entirely. All we have to do is to play or listen to them again, and they're born anew.

I'm heaving the circular saw onto the workbench as my father-in-law Bernie walks in the door. Every so often he throws cool stuff he's collected over the years into the bed of his daughter's childhood classic red radio flyer and drags it down the street to our house, where he spreads it out like a cat delivering dead mice and together we pick through it. "Keep what you want," he announces, "and throw out the rest. I'm not saving things anymore." I hand him a paper cup full of hot coffee and he sits heavily in the canvas chair I leave set up for him. The Ravel begins, burbling in the clarinets, the solo strings and flutes giving us the bird calls that have launched a thousand film scores. Bernie fishes a lure from the stash he's brought and holds it out to me.

"I got this from a fellow when I was a lifeguard at Crystal Beach," he begins. Post-stroke, the vital, athletic, classics teacher whose daughter I was courting who I got to know two decades ago moves more slowly; he can no longer read his beloved Shakespeare, or remember that he's told the same story before. In fact, I've heard this one, but it's a good one, and I'm glad to hear it again. "Have you ever caught anything with it?" I ask him. "Nothing but carp," he laughs, and I smile, thinking of Carpathia, the enormous, proud, and cruel Black Carp who eats flies and carrot sticks that I have told the boys in bedtime stories lives at the bottom of Lake Katrina at Yaddo.

Sudden, whooshing ritardandi, extreme portamenti in the solo strings come from the radio: I conjur an image of myself buying a pocket score of it at Tanglewood in August 1985, inhaling it like the smell of tangy hibiscus tea, and trying to figure out the doublings, writing in the margin, "what is it that makes it sound so sexy?" Bernie continues his story and I think, "that has got to be the Philharmonic with Bernstein." Is Bernie all there? Am I?

I smell Borkum Riff pipe tobacco. My dead father's signature smell. I think of him, smoking his pipe, the steely aggravation he barely concealed while tolerating my nervous, fumbling movements as we built a cold-frame together when I was eleven. And here, 43 years later, I find myself building another, musing, "do I frighten my sons as much as my father frightened me?" My son, playing goalie this morning, throwing himself at the soccer ball, my heart outside my body, leaping with him. His glance to the sideline where stood his mother and me, like touching a rabbit's foot, reassuring himself that we had seen him. His brother, head down, kicking a nutmeg through the opposing goalie's legs and pumping the air with his tiny fists. "No," I tell myself, "they don't fear me."

We agree, as we have done countless times before, like two old ingenious Quijotes, that we're amazed we're still here, and realize we're still here because of our Gildas and our kids. I look over at Bernie and realize that it is my turn to tell a story.

The Danse générale begins. "I was a teenager when my school orchestra performed this piece at the Evian Festival," I begin. "I was a composer and not considered a member of the orchestra. But I was there and they needed a fifth percussion player for the big finish." Bernie smiles, half-listening to me, half to the music. "I was told that I had only two responsibilities by Chip Ross, the classmate who had been directed to put a triangle into my hands and tell me what to do." The Ravelian juggernaut gains momentum. The little workshop is filled with sound. "What were they?" asks Bernie. "First," I answer, "to hit the thing when it came time to, and, second, to dampen the thing when the piece ended."

"Sounds straightforward," says Bernie. "Exactly," I answer, listening for the snare drum tattoo that the old set of Durand parts had in the percussion parts as the cue for the triangle at the end, just as I had listened for it in France during summer 1983. "And here it comes," I say, realizing that there is no question but that this is the recording made by Ormandy and Philadelphia: the trumpets in thirds are not New York, and the strings are obviously Philly. What was I thinking? That was clearly John Delancie playing the oboe solo back there. But the music is orgiastic by this time, and the triangle is beating away. "I fulfilled my first responsibility," I tell Bernie. The piece ends, like a mighty emotional anacrusis, and there is silence. "Then," I tell Bernie, "the piece ended, and the last chord died away, leaving, hanging in the air, the decaying sound of one lone triangle, held proudly aloft by a scarlet-faced composer, realizing, as all his classmates turned to look at him, that he had failed them all."

"Nature," my teacher Homer Lambrecht once reminded me, "teaches us also how to let things die." We'll cut the Black Eyed Susans back; they'll return, they are perrennials. The rest we'll mulch, and we'll put the cold-frame up and start anew. We'll make, as Lenny insisted, our garden grow. Could I have damped that triangle all those years ago and still have ended up here?