Sometimes, you have to chase an exclusive down — and sometimes, it's waiting there for you on Line 1. That was the case yesterday afternoon at around 5:30 pm when Abrams got an unexpected phone call from a surprise caller: Drew Peterson, husband of the missing Stacy Peterson, and widower of his deceased former wife, who was found dead in her bathtub. Friends of both wives have come forward, saying that the women had feared for their lives, and the police record reflects episodes of domestic disturbances in both households. Shockingly, people think he might have something to do with his wife's disappearance.

Anyhow, as luck would have it, yours truly was at 30 Rock yesterday to speak with Abrams for a lil' piece I'm doing for ETP, and while I chatted in the next office with his exec producer, Matt Saal, suddenly there was a flurry of excitement in the hallway. Dan ran by one way, then ran back. We heard: "Drew Peterson's on the phone?" confirmed a millisecond later by Dan, popping in to exclaim "Drew Peterson's on the phone!" Well, it's not often that a guy who hasn't been charged with anything but seems to be reacting sort of abnormally to the disappearance of his wife and seems to really, really, really like the cameras is on the phone for you, so Abrams of course took the call, because, well, he's a journalist AND a lawyer, dammit. And also, sometimes on his show they talk about Drew Peterson.

Here are the fruits of that phone call, and here's a partial transcript:

ABRAMS: We have breaking news tonight. Just before going to air, I had a 20-minute conversation with Drew Peterson, still a suspect in his wife Stacy's disappearance. Peterson was willing to speak just about everything related to the case except what happened the night Stacy disappeared. I asked him why he is not helping to look for his missing wife because that could clear him if she is alive as he claims.

Quote, he said, "Well that would cause me to wrap up the children and travel nationwide. I just learned you can leave the country without your passport being checked. They check you when you come in. She could be anywhere. She's been sighted in all these places but they don't have the manpower to find her. I don't know what to do. I'm not going to go out checking fields and forests for her because I don't believe she's there." 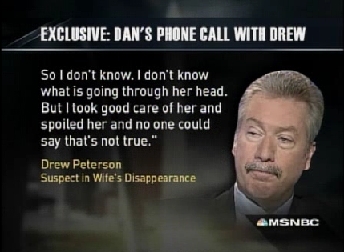 I then asked Peterson. If he really believes that Stacy hated him so much, that she would stay in hiding and let him be accused of killing her, Peterson then said, quote, "I don't know, or was she afraid? I have one lawyer telling me she's either going to surface or she's going to go deeper because she's afraid."

And he said this, "The runaway bride got criminally charged and had to pay $100,000 or something. So I don't know. I don't know what is going through her head. But I took good care of her and spoiled her and no one could say that's not true."

And then this. Peterson fanning the flames that his lawyer ignited on this show last night, Joel Brodsky, suggesting that Stacy may have been having a relationship with the family pastor who came out and spoke out about all of this.

Peterson saying, quote, "I know Stacy was very infatuated with the guy. If it was a two-way relationship, I can't comment. Every time she'd go meet with him, she'd be all dolled up in something voluptuous and seductive and her makeup was perfect. And it was odd to go and meet a pastor like that. I don't know if something was going on, but I didn't know about these other guys either."

So: He isn't looking for his missing wife because it's not all that convenient, he pats himself on the back for getting her a boob job, and he suggests she might have been doing the pastor. Wow. Ladies, who wants to be wife #5? Line forms here!

Abrams told me that, though his staff had made previous efforts to contact Peterson, yesterday's phone call took him by surprise. Abrams said that Peterson reached out to him to "clear a couple things up"; when I asked if he had done so, Abrams didn't seems so sure. "I think that a lot of the time when Drew Peterson talks he ends up getting himself into more trouble," said Abrams, perhaps referring to Peterson's repeated efforts to, er, actively engage the media. "But I think that he needs to change his image somehow, whether that's going to be in the context of changing his behavior." Like, say, not allegedly murdering his wives? Abrams didn't say.

Um, a defense attorney talks about the case too. Read more about it here.