Everywhere you go this summer, you see people reading Dan Brown's newest blockbuster, Inferno. In preparing this book, Brown clearly traveled to many places in Italy, including the "Casa di Dante" museum in Florence, which his protagonist, Harvard Professor Robert Langdon, visits in search of the text of Dante's Divine Comedy -- of which Inferno, the source of Brown's borrowed title, is the first of three volumes. 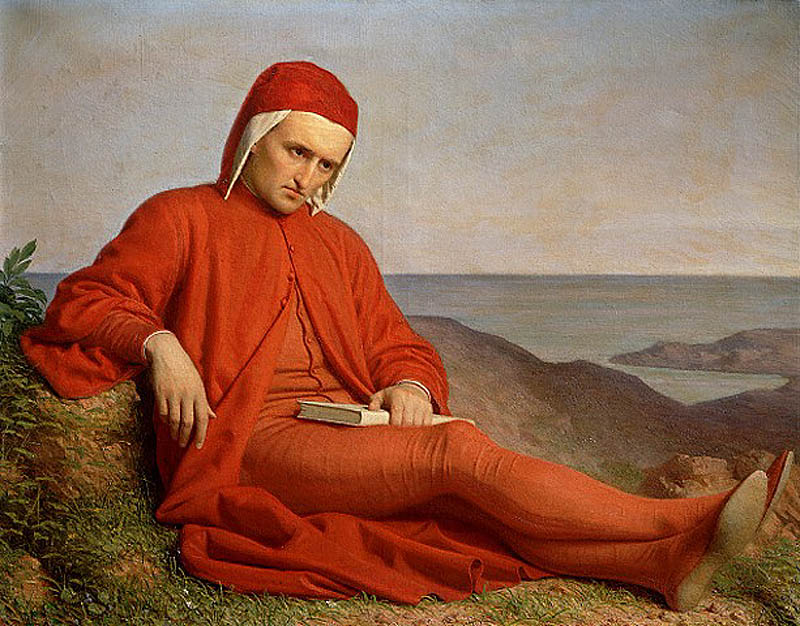 Brown has been very good at finding mathematical and scientific grist for his novels, such as his use of the famous mathematical Fibonacci sequence in The Da Vinci Code and deadly antimatter from CERN in Angels & Demons -- the movie based on the book even featuring the Large Hadron Collider. He is so efficient at this exploitation of science that when my nonfiction book Descartes' Secret Notebook, exposing some of Descartes' mathematical esoterica, became a bestseller in Italy in 2006, Umberto Eco accused me of being "a disciple of Dan Brown" (I'm not; and Eco and I have since become friends.)

Brown's present subject of Dante -- one of the giants of Western literature -- provides a superb background for a modern fictional adventure. But there are, in fact, real scientific mysteries about Dante -- which should well be explored. The geometry of Dante's universe, for example, as described in the Divine Comedy, has been studied by mathematicians, and some see in it an example of non-Euclidean geometry. 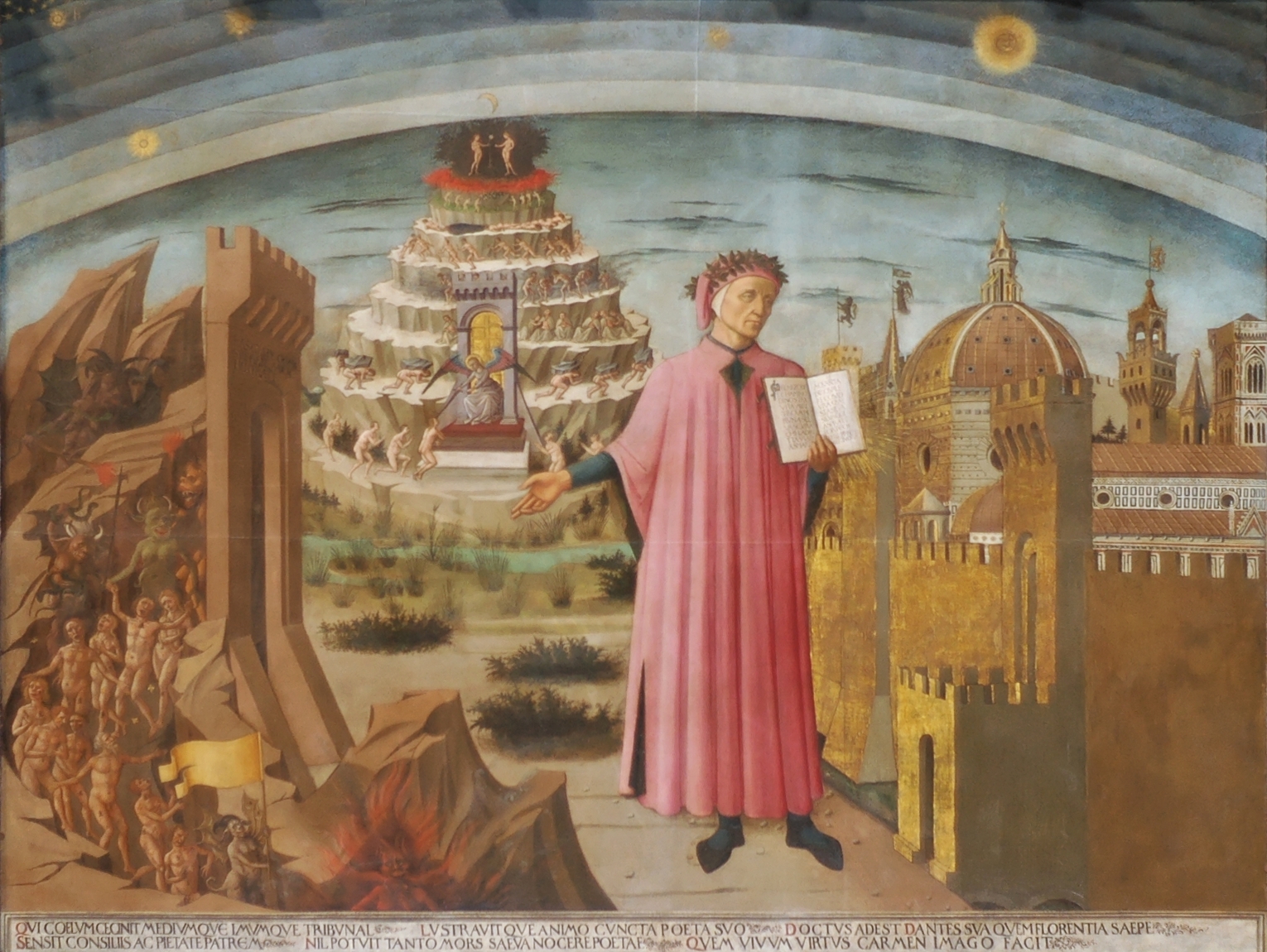 Dante and his world. A fresco by Domenico di Michelino, in the Duomo of Florence (Wikimedia Commons)

This picture shows some of the "curvature" of Dante's universe: the Earth, the stars, the planets, Hell -- the Inferno -- and Dante's beloved Florence in the background. If one follows Dante's description of the circles of hell, the mountain of Purgatory, Jerusalem, and the enigmatic Empyrean, it's possible to see here an unconventional kind of geometry (non-Euclidean), as described in the link above.

But the Dantesque mystery that I want to explore here is far deeper, and, to my knowledge, has not been studied much since the 19th century. It's a deep astronomical conundrum that has consumed me ever since I came upon it a few years ago.

Close to the beginning of the middle volume of the Divine Comedy, the Purgatorio, Dante writes (Canto I, 22-27; Allen Mandelbaum's translation, Bantam, 1984):

Then I turned to the right, setting my mind
upon the other pole, and saw four stars
not seen before except by the first people.
Heaven appeared to revel in their flames:
o northern hemisphere, because you were
denied that sight, you are a widower!

What a mystery! Dante wrote this around AD 1300 (he was born in 1265, and the Inferno, begins with: "When I had journeyed half of our life's way," Nel mezzo del cammin di nosta vita, which scholars have take to mean he wrote it at about age 35). The verses above clearly describe the southern-hemisphere constellation Crux -- better known as the Southern Cross. But the stars of the southern hemisphere were only explored for the first time by northern-hemisphere navigators a century and a half after Dante's time! 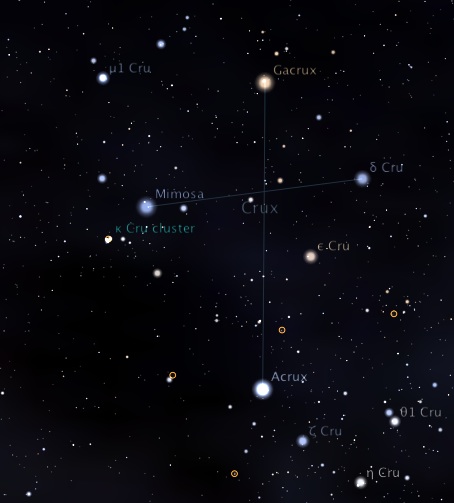 The Southern Cross asterism, in the constellation Crux, photo: oneminuteastronomy.com

How could Dante, writing in the very early 1300s, know about a constellation first seen by the Venetian explorer Alvise Cadamosto, who noted it while sailing off the African coast in 1455, and more precisely described by later navigators: Amerigo Vespucci (who saw the constellation as an almond, Mandorla) in his voyages to South America in 1499 to 1502, and later by Ferdinand Magellan, who sailed from the Atlantic to the Pacific in 1519 to 1522? I've posed this question to some of the world's leading astronomers, but no one has an answer.

As a map of the sky shows, Crux is far south -- a third of the way from the south celestial pole to the equator. 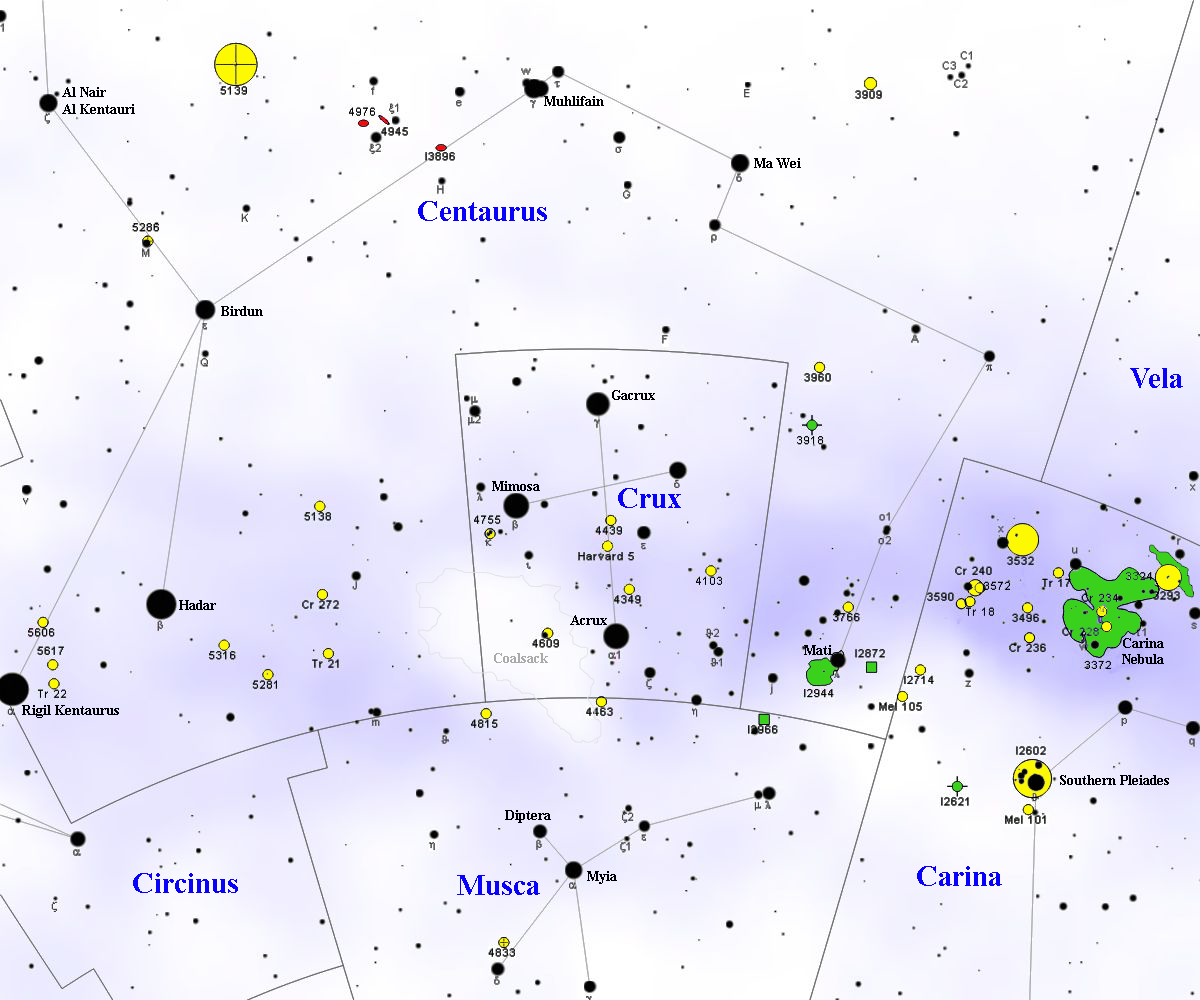 The Constellation Crux within the Southern Sky. Wikimedia Commons

Let's look more closely at what Dante says. This conundrum was addressed a few times in the nineteenth century, including a note by N. Perini in Nature in 1881, but not much since. In his 1997 book The Starlore Handbook (Chronicle books, pp. 72-3), Geoffrey Cornelius interprets Dante as follows: "The 'first men' are the first Christians, as Crux was just visible at the latitude of Jerusalem in the era of Christ. Dante, who was clearly aware of the effects of precession, refers to a godless age after the death of Christ, when Crux had gradually slipped out of view at this latitude."

Mandelbaum, in the Notes accompanying his translation of the Divine Comedy, interprets Dante's "first people" as Adam and Eve and speculates that Dante suggests that they could see the "four stars" of the cross until they were expelled from Eden to the Northern Hemisphere, from which the constellation can't be seen. (Mandelbaum's translation of Purgatorio, Bantam, 1984, p. 318.)

Cornelius' explanation of precession seems more likely to be true, since astronomers have shown that precession -- the gradual "wobble" of Earth's axis of rotation, with a period of about 26,000 years -- does change the apparent positions of stars in the heaven as observed over centuries. It is known that because of this gradual shift of Earth's orientation in space as it rotates on its axis and revolves around the Sun, the ancient Greeks could see the constellation of Crux above the horizon, describing it as a kite (Jay M. Pasachoff and D. H. Menzel, Stars and Planets, Houghton Mifflin, 1997, p. 144).

A Demonstration of the process of precession of Earth's rotational axis over thousands of years (By Ereenegee (Own work) [CC-BY-SA-3.0 (via Wikimedia Commons)

Either way, how would Dante, living in the Middle Ages, understand precession, and know about an asterism that looks like a cross, not seen in the northern hemisphere for centuries and not to be identified in a popular star atlas (Johann Bayer's Uranometria, 1603) until the 17th century? These questions remain unanswered.