Like The Da Vinci Code, Dan Brown's new book, The Lost Symbol, is creating controversy. This time it's about what's real and what's not in his interpretations of the many mysterious symbols that are in our nation's capitol. Were our founding fathers, who carefully designed and placed these mystical symbols, trying to tell us something? (They were Freemasons whose motto is ordo ab chao or "order out of chaos".) Are Brown's descriptions of noetic science (exploring the nature and potentials of consciousness) and quantum-indeterminate electronic noise REGS (Random Event Generators) fact or fiction? Are his assertions true that existing organizations had "categorically proven that human thought, if properly focused had the ability to affect and change physical mass" and that "our thoughts actually interacted with the physical world, whether or not we knew it, effecting change all the way down to the subatomic realm?"

Brown states in The Lost Symbol that in the hours following the horrifying events of September 11, 2001 the field of noetic science made a quantum leap forward in proving a connection between science and mysticism and bringing order out of chaos. "Four scientists discovered that as the frightened world came together and focused in shared grief on this single tragedy, the outputs of thirty-seven different Random Event Generators around the world suddenly became significantly less random. Somehow, the oneness of this shared experience, the coalescing of millions of minds, had affected the randomizing function of these machines, organizing their outputs and bringing order form chaos." His fictional character Trish talks about "software that quantifies the nation's emotional state." Brown goes on. His fictional scientist Katherine "created beautifully symmetrical ice crystals by sending loving thoughts to a glass of water as it froze. Incredibly the converse was also true: when she sent negative, polluting thoughts to the water, the ice crystals froze in chaotic, fractured forms." What is Dan Brown trying to tell us? 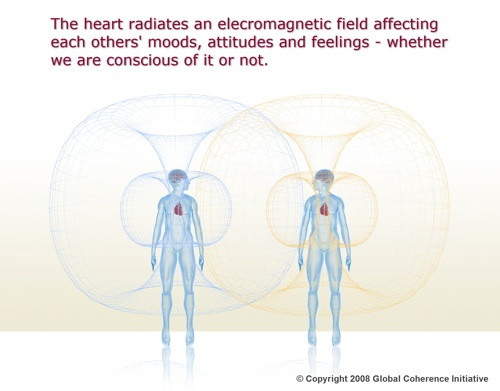 In analyzing the Random Event Generator data from 9-11 (this data is real), along with analyzing data recorded on 9-11 by two geostationary environmental satellites (GOES) orbiting the Earth which detected a higher rise in global magnetism than any that had been recorded for the same date/time previously about 15 minutes after the first plane hit the World Trade Center and about 15 minutes before the second impact, researchers had to ask the questions: What if mass human emotional states (positive or negative) can actually affect the earth's energetic fields? What if our collective emotional state (which is becoming more interconnected all the time through the internet and mass media) is causing chaos or order at the quantum energetic level which is affecting climatic, geomagnetic, political and social activity?

Many people are feeling a shift in consciousness happening now and some are predicting a major planetary shift around the year 2012. There are cosmic changes occurring around that time: a new cycle of solar activity that's beginning now peaks around that time; the earth comes into alignment with the center of our galaxy for the first time in 25,000 years in 2012, and more. The Mayan calendar ends in December 2012 and other ancient cultures predicted unprecedented opportunity through these times. As usual, some books and movies will be exploiting fear-based scenarios, which is standard during any period increased enlightenment and transformation. Other books, like Dan Brown's, says this time period signals "the impending transformations of our human minds into their true potentiality," and that, "We are on the verge of a truly great period of illumination.... profoundly blessed to be living through this pivotal moment of history. Of all the people who have ever lived, in all the eras in history... we are in that narrow window of time during which we will bear witness to our ultimate renaissance." Gregg Braden's book, Fractal Time, carefully compares many ancient predictions with modern scientific evidence, offering hope that a shift in consciousness is taking place now and will continue considerably past 2012. Braden sees this as a time period of great opportunity and choice for humanity. To create order out of the emotional chaos and stress going on around us now, humanity has to choose to participate in this enlightenment opportunity.

More and more individuals and groups are sensing a need to come together in prayer, meditations and collective intention, to put out positive emotional energy of love and care to facilitate positive outcomes for the planetary whole. The not-for-profit Global Coherence Initiative (GCI), with scientists from the Institute of Noetic Sciences and the Global Consciousness Project, is researching the impact of collective emotional states on a global level and building a global coherence monitoring system (GCMS) of ultrasensitive magnetic field detectors to study the effect of collective negative and positive human emotionality on the Earth's systems. The intention of GCI, in collaboration with other groups and researchers, is to create a science-based platform to inspire millions of people from different belief systems to participate in an ongoing practice of generating heart-focused love, care and intention to help shift global consciousness. They will be providing self-transformational tools and technologies that can help people align with their higher potentials for order (coherence), in order to facilitate positive global change during the influx of the next solar cycle that is starting now. (GCI membership is free. Visit www.glcoherence.org to join and see the research and scientific advisory board).

The GCI hypotheses are that:

1) All living things are interconnected and that we communicate with each other via our biological and electromagnetic fields.

2) Not only are humans affected by such energetic fields, but conversely the Earth's energetic systems are also influenced by collective human emotions and consciousness. Much of the planetary field environment is made up of the collective consciousness of the inhabitants.

3) Large numbers of people intentionally creating heart-coherent states of care, love, compassion and appreciation will generate a coherent standing wave that can help offset the current planetary-wide wave of stress, discord and incoherence.

A major factor in the global consciousness shift is enough people realizing the need to become more self-responsible for their own energy, thoughts, feelings and actions. It is each person's responsibility to establish balance within ourselves and with the Earth. Every action counts, and by "taking charge" and enough people increasing their internal coherence baseline level, this shift and consciousness upgrade will be reflected in the global field environment as well. This in turn will create a mutually beneficial feedback loop between human beings and the Earth's energetic systems.

There always have been pessimistic and fear-based projections related to new solar or energetic cycles that have an interactive influence with the planet. However, increased solar activity means increased light released on the planet which can facilitate new choices. This is especially relevant during times of increased "human excitability" which occurs during the increase of solar activity, to turn the energy influxes into increased creativity and opportunity rather than increased fear and conflict. That's what the global consciousness shift is about: a chance to elect heart-based choices, then take charge and do things differently -- by responding to events and each other with more consciousness, respect, love and compassion. It's time to end the tendency to create and repeat the same old chaos-producing "play-outs" each time there is an energy influx on the planet (such as solar activity and other energetic influences) that could bring benefits and creative opportunities to help humanity spiral up towards the next dimension of active intelligence and heart-based living. Yet people will have to take responsibility for their own energy to create deeper connections and more caring interactions with each other and the Earth.

GCI is only one of the many emerging groups working to facilitate a consciousness shift in these adventuresome and sometimes challenging times. No group is "more important" than another. With a noncompetitive spirit and genuine care, all these groups and individuals add a helpful piece to the planet and are energetically connected to each other at the heart level to serve the greater whole. Each of us is always putting out an energetic field from our mental-attitudinal-emotional energies. A consciousness shift to create order (coherence) from chaos is all about putting heart-coherent energy into the individual, social and global field environment.

One of the most powerful practices to create a more positive field environment is taking two or three minutes, here and there in-between activities (in-between meetings, projects, waiting for your computer reboot) to radiate from your heart the feelings of love, appreciation, gratitude, care or compassion to your environment or to someone. This counts in the planetary and local field environment. When you are sending heart feelings to others and to the planet - you are activating hormones and neurotransmitters that benefit and revitalize your personal system. This translates into increased resilience and emotional flexibility.

This heart-focused exercise we call "In-Between" is important for opening the heart more to offset low grade anxieties which are understandable through these times. Practicing the "In-Between" tool also helps clear out a lot of continuously running "under-stuff". People's cells store coherent or incoherent energies which play a part in our overall happiness, health and ability to balance stress from within or without and create order out of chaos during the Shift.

"Activating Global Heart," a Global Coherence Initiative benefit event with Gregg Braden, Deborah Rozman, Howard Martin, Marci Shimoff, Nina Utne and other speakers is being held in Santa Cruz, California. Read more about these 2- events which happen on October 22 and 24 at www.glcoherence.org.

Other GCI events happening in France and Vancouver this October are listed on the GCI events page.

We invite you to join the Global Coherence Initiative Facebook, Gaia and Twitter pages and YouTube channel where the latest resources are often announced and made available.

If you think this is important information but not readily accessible yet, what would you suggest to get the word out? Send us your comments, suggestions, and thoughts on this. Put them in the comments section below or send us an email at dr@heartmath.com.

President and CEO of HeartMath Inc.

President and CEO of HeartMath Inc.