I spent New Year's Eve at the red-blooded, all-American epicenter of college football: at the Chick-fil-A Bowl, next to Dan Cathy, as his personal guest. It was among the most unexpected moments of my life.

Yes, after months of personal phone calls, text messages and in-person meetings, I am coming out in a new way, as a friend of Chick-fil-A's president and COO, Dan Cathy, and I am nervous about it. I have come to know him and Chick-fil-A in ways that I would not have thought possible when I first started hearing from LGBT students about their concerns over the chicken chain's giving practices.

For many this news of friendship might be shocking. After all, I am an out, 40-year-old gay man and a lifelong activist for equality. I am also the founder and executive director of Campus Pride, the leading national organization for lesbian, gay, bisexual, transgender (LGBT) and ally college students. Just seven months ago our organization advanced a national campaign against Chick-fil-A for the millions of dollars it donated to anti-LGBT organizations and divisive political groups that work each day to harm hardworking LGBT young people, adults and our families. I have spent quite some time being angry at and deeply distrustful of Dan Cathy and Chick-fil-A. If he had his way, my husband of 18 years and I would never be legally married. 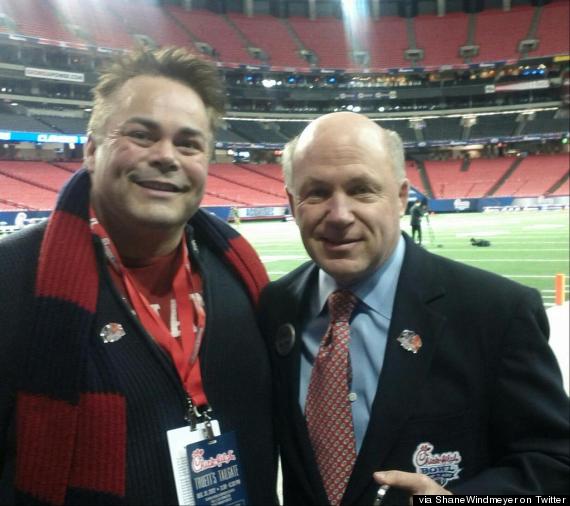 Why was I now standing next to him at one of the most popular football showdowns? How could I dare think to have a relationship with a man and a company that have advocated against who I am; who would take apart my family in the name of "traditional marriage"; whose voice and views represented exactly the opposite of those of the students for whom I advocate every day? Dan is the problem, and Chick-fil-A is the enemy, right?

Like most LGBT people, I was provoked by Dan's public opposition to marriage equality and his company's problematic giving history. I had the background and history on him, so I thought, and had my own preconceived notions about who he was. I knew this character. No way did he know me. That was my view. But it was flawed.

For nearly a decade now, my organization, Campus Pride, has been on the ground with student leaders protesting Chick-fil-A at campuses across the country. I had researched Chick-fil-A's nearly $5 million in funding, given since 2003, to anti-LGBT groups. And the whole nation was aware that Dan was "guilty as charged" in his support of a "biblical definition" of marriage. What more was there to know?

On Aug. 10, 2012, in the heat of the controversy, I got a surprise call from Dan Cathy. He had gotten my cell phone number from a mutual business contact serving campus groups. I took the call with great caution. He was going to tear me apart, right? Give me a piece of his mind? Turn his lawyers on me?

The first call lasted over an hour, and the private conversation led to more calls the next week and the week after. Dan Cathy knew how to text, and he would reach out to me as new questions came to his mind. This was not going to be a typical turn of events.

His questions and a series of deeper conversations ultimately led to a number of in-person meetings with Dan and representatives from Chick-fil-A. He had never before had such dialogue with any member of the LGBT community. It was awkward at times but always genuine and kind.

It is not often that people with deeply held and completely opposing viewpoints actually risk sitting down and listening to one another. We see this failure to listen and learn in our government, in our communities and in our own families. Dan Cathy and I would, together, try to do better than each of us had experienced before.

Never once did Dan or anyone from Chick-fil-A ask for Campus Pride to stop protesting Chick-fil-A. On the contrary, Dan listened intently to our concerns and the real-life accounts from youth about the negative impact that Chick-fil-A was having on campus climate and safety at colleges across the country. He was concerned about an incident last fall where a fraternity was tabling next to the Chick-fil-A restaurant on campus. Whenever an out gay student on campus would walk past the table, the fraternity would chant, "We love Chick-fil-A," and then shout anti-gay slurs at the student. Dan sought first to understand, not to be understood. He confessed that he had been naïve to the issues at hand and the unintended impact of his company's actions.

Chick-fil-A also provided access to internal documents related to the funding of anti-LGBT groups and asked questions about our concerns related to this funding. An internal document, titled "Who We Are," expressed Chick-fil-A's values, which included their commitment "to treat every person with honor, dignity and respect," including LGBT people. Dan and his family members had personally drafted, refined and approved the document.

Through all this, Dan and I shared respectful, enduring communication and built trust. His demeanor has always been one of kindness and openness. Even when I continued to directly question his public actions and the funding decisions, Dan embraced the opportunity to have dialogue and hear my perspective. He and I were committed to a better understanding of one another. Our mutual hope was to find common ground if possible, and to build respect no matter what. We learned about each other as people with opposing views, not as opposing people.

During our meetings I came to see that the Chick-fil-A brand was being used by both sides of the political debate around gay marriage. The repercussion of this was a deep division and polarization that was fueling feelings of hate on all sides. As a result, we agreed to keep the ongoing nature of our meetings private for the time being. The fire needed no more fuel.

Throughout the conversations Dan expressed a sincere interest in my life, wanting to get to know me on a personal level. He wanted to know about where I grew up, my faith, my family, even my husband, Tommy. In return, I learned about his wife and kids and gained an appreciation for his devout belief in Jesus Christ and his commitment to being "a follower of Christ" more than a "Christian." Dan expressed regret and genuine sadness when he heard of people being treated unkindly in the name of Chick-fil-a -- but he offered no apologies for his genuine beliefs about marriage.

And in that we had great commonality: We were each entirely ourselves. We both wanted to be respected and for others to understand our views. Neither of us could -- or would -- change. It was not possible. We were different but in dialogue. That was progress.

In many ways, getting to know Dan better has reminded me of my relationship with my uncle, who is a pastor at a Pentecostal church. When I came out as openly gay in college, I was aware that his religious views were not supportive of homosexuality. But my personal relationship with my uncle reassured me of his love for me -- and that love extends to my husband. My uncle would never want to see any harm come to me or Tommy. His beliefs prevented him from fully reconciling what he understood as the immorality of homosexuality with the morality of loving and supporting me and my life. It was, and remains, an unsolvable riddle for him, hating the sin and loving the sinner.

My relationship with Dan is the same, though he is not my family. Dan, in his heart, is driven by his desire to minister to others and had to choose to continue our relationship throughout this controversy. He had to both hold to his beliefs and welcome me into them. He had to face the issue of respecting my viewpoints and life even while not being able to reconcile them with his belief system. He defined this to me as "the blessing of growth." He expanded his world without abandoning it. I did, as well.

As Dan and I grew through mutual dialogue and respect, he invited me to be his personal guest on New Year's Eve at the Chick-fil-A Bowl. This was an event that Campus Pride and others had planned to protest. Had I been played? Seduced into his billionaire's life? No. It was Dan who took a great risk in inviting me: He stood to face the ire of his conservative base (and a potential boycott) by being seen or photographed with an LGBT activist. He could have been portrayed as "caving to the gay agenda" by welcoming me.

Instead, he stood next to me most of the night, putting respect ahead of fear. There we were on the sidelines, Dan, his wife, his family and friends and I, all enjoying the game. And that is why building a relationship with someone I thought I would never understand mattered. Our worlds, different as they can be, could coexist peacefully. The millions of college football fans watching the game never could have imagined what was playing out right in front of them. Gay and straight, liberal and conservative, activist and evangelist -- we could stand together in our difference and in our respect. How much better would our world be if more could do the same?

This past week Chick-fil-A shared with me the 2011 IRS Form 990, filed in November for the WinShape Foundation, along with 2012 financials. The IRS has not released the 990 to the public yet, but the financials affirm Chick-fil-A's values a year prior to the controversy this past July. The nearly $6 million in outside grant funding focuses on youth, education, marriage enrichment and local communities. The funding reflects Chick-fil-A's promised commitment not to engage in "political or social debates," and the most divisive anti-LGBT groups are no longer listed.

Even as Campus Pride and so many in the community protested Chick-fil-A and its funding of groups like Family Research Council, Eagle Forum and Exodus International, the funding of these groups had already stopped. Dan Cathy and Chick-fil-A could have noted this publicly earlier. Instead, they chose to be patient, to engage in private dialogue, to reach understanding,and to share proof with me when it was official. There was no "caving"; there were no "concessions." There was, in my view, conscience.

This is why, after discussions with Dan and Chick-fil-A, Campus Pride suspended our campaign. Like Dan, we had faith. It took time to be proven publicly.

Now it is all about the future, one defined, let's hope, by continued mutual respect. I will not change my views, and Dan will likely not change his, but we can continue to listen, learn and appreciate "the blessing of growth" that happens when we know each other better. I hope that our nation's political leaders and campus leaders might do the same.

In the end, it is not about eating (or eating a certain chicken sandwich). It is about sitting down at a table together and sharing our views as human beings, engaged in real, respectful, civil dialogue. Dan would probably call this act the biblical definition of hospitality. I would call it human decency. So long as we are all at the same table and talking, does it matter what we call it or what we eat?