There was a time when comic book pages were occupied by superheroes and masked avengers, but now many are filled by the trials and tribulations of misfits, loners, sad sacks, pervs and total weirdos. For this we largely thank Dan Clowes, the visionary comic behind "Ghost World," "Mister Wonderful," "Wilson" and "The Death Ray."

While Clowes' name is on the tip of most tongues when discussing graphic novels, the art world has been a bit slower on the uptake, until recently. In 2012 the comic force, whose aesthetic has been compared to Pop artist Alex Katz, received his first museum retrospective in Oakland.

This summer, his hit exhibition, "Modern Cartoonist: The Art of Daniel Clowes," is heading to his hometown. MCA Chicago will present 125 of Clowes' original drawings, along with gouache paintings of select comic covers. In anticipation of Clowes' journey home to the Windy City, we reached out to learn more about what our favorite misanthrope has been up to lately. Scroll down for a slideshow of his work.

HP: How does it feel to be returning to Chicago for your retrospective?

DC: I am excited about the show. Having grown up in Chicago and left it 20 years ago it is always painful to see how different it is. It is such a part of the world I am drawing every day, [but] everything I remember is gone, and on some level I still feel like it is 1974.

HP: How do you think experiencing your work in a museum setting affects the experience? Do you think it's possible to get the full effect of the comics?

DC: It's a very different experience. People who go to a museum are a very different crowd than the people who read comics. I am hoping people give it some attention and maybe some people will want to see it in its true form and, you know, read the books. I am hoping people who read the books will enjoy seeing the actual work as it was done by hand. I know at least for me, looking at the work of other cartoonists with other mistakes and erasures to give it that kind of humanity is a very powerful and moving experience.

HP: When you were thinking of backup jobs after art school what were some of the main contenders?

DC: I had no backup plan. I had no skills, I wasn't a good people person, I really put it all into trying to make a living either as an illustrator. I would not encourage that for any other kids! If I had had any other viable backup career, I probably would have gone into that.

HP: You've said "I was a child until I had a child." Did having a kid affect your imagination or creative habits?

DC: Not in the way that you imagine it. You think that when you have a kid you'll tap back into your childhood but it's more that you understand the importance of being an adult. It has changed my work in that I used to feel like a perennial adolescent and now I feel like I am coming at my work as a man and a father -- someone who has a weight on his shoulders.

HP: Are you in Oakland for life? What is your favorite part about the city?

DC: I think so. I like California. I like that the oldest things around here are from 1890. There is still lots of wilderness; it is kind of remarkable how little of the state parks have been destroyed. It is always kind of shocking when you drive up the coast and you are like nobody has actually put up billboards. When I go to New York I am just overwhelmed. On a given day in Oakland I see 100 people walk past me in an entire day and in New York I see like 500 immediately when I get off the train.

HP: You've expressed discontent about our cultural obsession with technology. Is there any technological device you couldn't live without?

Of course I have every single thing. The other day my son expressed an interest in taking apart a computer -- he is like nine years old. I thought I had one or two old computers in the basement, but we went down there and realized we had like 11 computers. And I was thinking, Oh, we're technophobes, but, no, we're real Apple suckers! Of course that makes me hate myself.

HP: You've said that growing up shy was a horrible experience. Do you feel like you've become more confident as an adult?

DC: I am not as self conscious as I was. I don't really care much anymore. I think that is part of having a kid. I have to be a good model for him, showing him how to interact with people. He is very at ease with everybody, so he is kind of a good role model for me.

HP: How old you do you feel?

DC: Right when I wake up I would say, like 28. That would be the number that popped up in my head. Which is good because it used to be 13. By the time I die it will be about 35.

"Modern Cartoonist: The Art Of Daniel Clowes" will show from June 29 until October 13, 2013 at MCA Chicago. 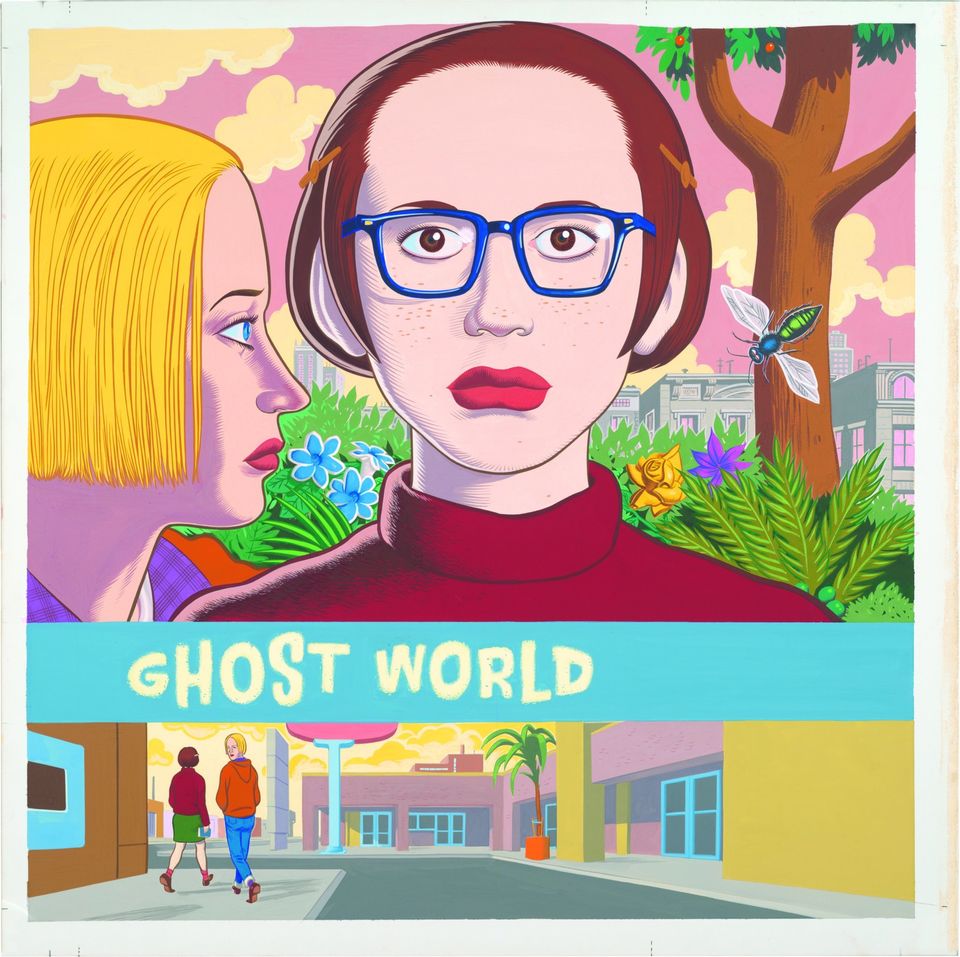