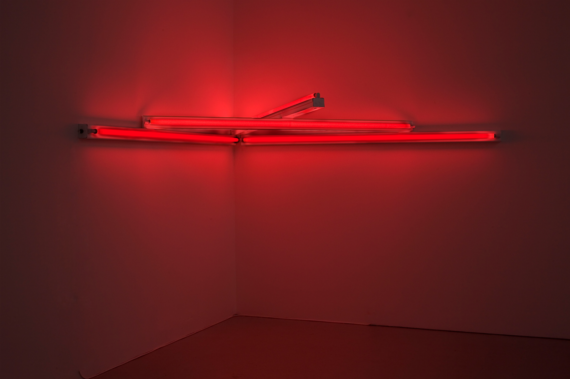 When most people hear the word "political art" they think figurative, one-dimensional propaganda.

This is even more true when they hear the word "antiwar art." One envisions documentary photographs of wartime destruction and atrocities; "direct evidence" of the casualties of war.

Yet this is increasingly far from the case today. In our world--where war is a constant issue--antiwar messages present themselves in a range of art approaches for various audiences. A recent example is the scope and diversity of antiwar work created during the American wars in Iraq and Afghanistan: significant works encompassed painting, sculpture, performance, installation, posters, and short films--and ranged from the most "representational" to the most "abstract" and conceptual forms of expression. A few of the most memorable were Harrell Fletcher's conceptual work, The American War (2005), the Yo! collective's iRaq series of posters (2004), Yael Davids' performance piece, Choosing One's Heritage (2007), Michael Rakowitz's return (begun in 2004), Steve McQueen's Queen and Country (2007) and Mark Wallinger's State Britain (2007).

When did such diversity of expression become possible? Artistic protest against the Vietnam War (1964-1975) was the origin for this expansion of possibilities for antiwar art in the United States, but also (to an extent) internationally. The dramatic expansion of approaches to art-making in general during the 1960s, coupled with a cultural/institutional environment which allowed such work to be made (as well as the intensity of antiwar sentiments), were the major catalysts for it.

As I've argued in my recent book, Kill for Peace: American Artists Against the Vietnam War, for anyone interested how artists engage with war, understanding its history is critical. The unfortunate fact is protest work is quickly forgotten after wars end and as a result, each time artists want to explore the possibilities for dissent, they need to start over, and have no formal or conceptual roots to build upon. Political economist and sociologist Giovanni Arrighi labeled this "the non-continuity of rebellion" and called it "one of the great strengths of the world's ruling strata throughout history."

Accordingly, I'd like to use this post as an opportunity to review some history, and remind readers of how artists associated with Minimalism--a movement not typically thought of as political or antiwar--engaged with the Vietnam conflict. (In so doing they also foreshadowed a common/influential tendency of the 1990s: a politicized minimalism, which can be seen in the work of artists such as Felix Gonzalez-Torres and Robert Gober, among others.)

One of the first examples of a minimalist work to engage with the war was Dan Flavin's monument 4 those who have been killed in ambush (to P.K. who reminded me about death), 1966. Installed as part of the Jewish Museum's landmark 1966 exhibition Primary Structures--the first major museum exhibition of minimalism--Flavin's sculpture consisted of his signature fluorescent lights--with red-colored gels covering the bulbs--set into a corner at about waist height. The bulbs were arranged in the shape of what could best be described as a crossbow.

One of the lights, which could be seen as the arrow of the crossbow, was set parallel to the floor, jutting out into the gallery space directly toward the viewer. It rested on other perpendicular lights that appeared to be the bow.

Taking Flavin at his word (i.e., the title), the work served as a memorial for soldiers who were victims of ambushes. According to the art historian Alex Potts, this reading coincides with Flavin's personal attention to the "concrete politics" of the mid-1960s, when ambushes were becoming a "big concern" for American soldiers in Vietnam. Flavin's hinting of the work to be a memorial also places it in the company of various future antiwar works (by artists such as Ed Kienholz and Robert Morris, after his surprising political awakening in 1970), which used the motif of memorials-before-the-fact (i.e., advance memorials) as a way to protest the war before its end. These non-traditional memorials both established the undeclared war in Vietnam as an actual war--one that necessitated a memorial--as well as foregrounded the increasing numbers of American dead.

One should be hesitant to allow the title (and Flavin's words) to entirely govern the understanding of this work, primarily because it obfuscates the work's aggression. Again, Flavin's bulbs are configured into the shape of a crossbow that seems to aim a blood-red arrow at the viewer's chest. One wonders if the work was meant to echo the feeling of an ambush for the viewers, possibly encouraging them to identify with the victims.

Art historians, mostly in recent years, have also proposed subtle antiwar arguments for other minimalist objects and in turn the artists who created them. Minimalist works' non-elitist materials, integrity, efficiency, and simplicity, for example, have been seen as an argument for a non-stratified society, objecting to a hierarchical world order in which war and conflict are common occurrences. Carl Andre's late 1960s floor pieces are a case in point. The art historian Julia Bryan-Wilson, for example, has most recently read them as a subversive gesture, a "mute anti-utilitarianism" that "acts powerfully to redress the balance" in society. As well, she argues that the movement of such unaltered materials into an art context unchanged was Andre's attempt to foreground a "zero-zero economic vector" and disrupt these materials' movement in society from use-value to exchange-value.

Donald Judd's political engagement has also been considered in recent scholarship. As opposed to the obdurate blankness of his minimalist production, art historian David Raskin has argued that Judd's anti-traditional, anti-subjective, symmetrical, serial art was "designed to counter the concentration of power in the elite," due to its aesthetic. Raskin also believed Judd's "art contained a subtle call to action," for, like Andre's work, it foregrounded a rejection of hierarchy in society.

Like Andre (through his involvement in the Art Workers' Coalition), Judd also actively opposed the war in Vietnam. Early on, he donated and contributed work to the 1966 Artists Tower of Protest (better known as the Peace Tower) and marched against the war. In the summer of 1969, during a residency at the Aspen Center for Contemporary Art, Judd and his wife, Julie Finch, published an antiwar announcement in the Aspen Times on behalf of the War Resisters League. Judd created one antiwar work of sorts as well, his "Yellow Poster," for the 1970 Westbeth Peace Festival (which benefited the New York Peace Action Coalition and Student Mobilization Committee to End the War in Vietnam). The poster was made from four mimeographed 8.5 × 11 inch yellow pieces of paper printed together as one. The four pages together contained thirty-two quotations Judd culled from historical and contemporary sources that advocated pacifism by illustrating the horrors of excessive government power.

Apart from the more canonical minimalists, during the late 1960s there was one prominent antiwar exhibition of minimalist work, the Paula Cooper Gallery's 1968 Benefit for the Student Mobilization Committee to End the War in Vietnam, as well as the production of works by Phoebe Helman, Ellsworth Kelly, and Brice Marden that took the form of gray or black monochromatic paintings. These works have been viewed as signifying the melancholic mood induced by the war. The black paintings of Wally Hedrick (who was one of the first artists to engage with the American presence in Vietnam with his 1959-1963 Anger) were another example of this type of work.

Hedrick's black paintings were entirely, deeply black, with surfaces ranging from scumbled to flat. To Hedrick, these more basic monochromes signified the withdrawal of his talent from Western culture, as well as the black of death and mourning, symbolizing the loss of lives and the loss of light (enlightened thinking) in the United States. In an exhibition of some of the paintings, Hedrick even comically and eerily compared damage to some of the early paintings in the series--the reason for which was probably just their means of storage and transportation--to the physical injuries of Vietnamese war victims. For example, he wrote in notes that were on display, "P.S. Those in the Aid Station, to the rear of the Gallery, are wounded, M.I.A.s and war orphans that received little or no medical help. Please open your heart and home to them."

In 1970 Hedrick began work on an installation of black paintings, called the Black Room, which is alternatively called the War Room. Black Room was planned as an entire room (with ceiling, floor, walls, and door) made out of bolted-together black canvases. The whole work, for Hedrick, was at once his largest rejection of "irrelevant aestheticism" and an expression of how the United States had "boxed itself in" with the war in Vietnam. Hedrick said that he also wanted to create a place for people to confront their feelings about the war. Depending on your politics, the door would either shut you in or serve as an escape hatch. The Room was never completed because the war ended, and the war was, for Hedrick, the reason for its existence--the installation (comprising only walls that create a five-foot square space) was resurrected and exhibited with the onset of the Gulf and Iraq Wars.

This article is predominantly comprised of selections from my book, Kill for Peace: American Artists Against the Vietnam War (Austin: University of Texas Press, 2013).